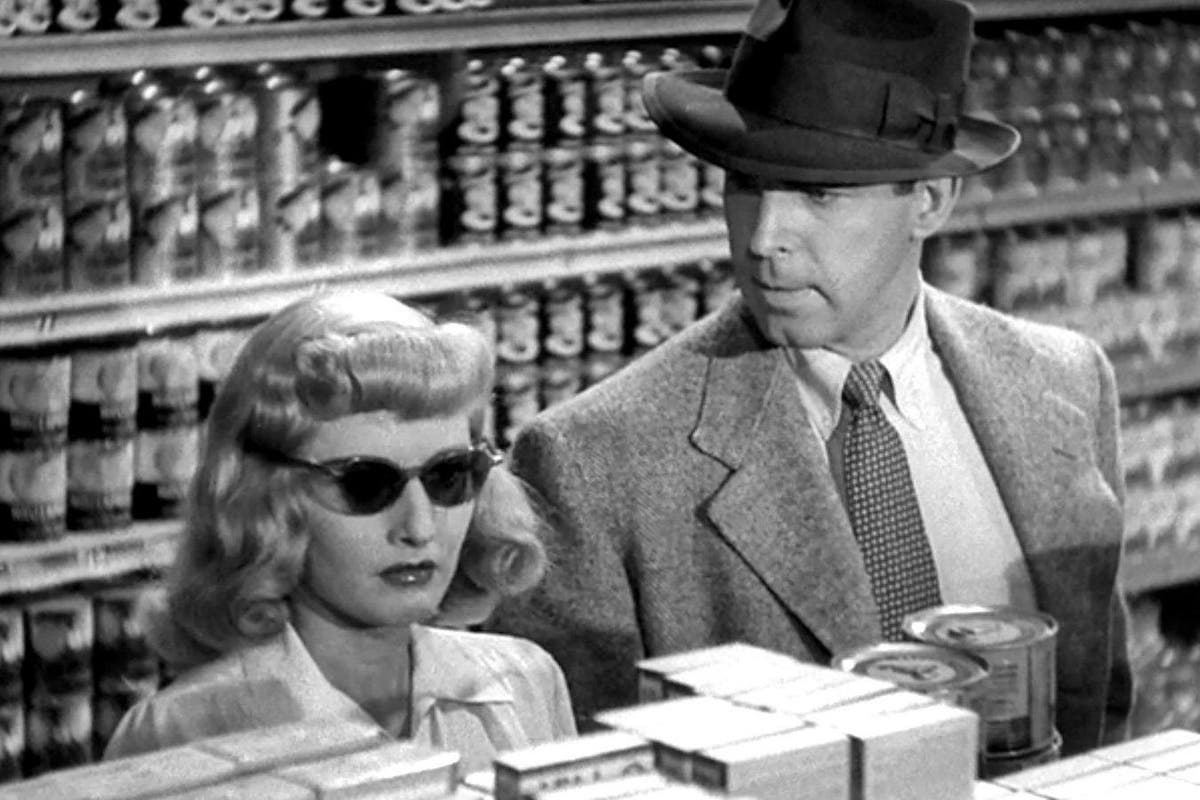 The phrase film noir was first coined in 1946 by a group of French critics to describe the emerging movement of mainly black and white Hollywood films with dark, pessimistic themes and signature motifs such as alienated antiheroes, rain slicked streets, dark shadows and seductive femme fatales.

Borrowing heavily from the hard-boiled but literary detective novels of Dashiell Hammett and Raymond Chandler, film noir attracted some of cinema’s greatest craftsmen including Orson Welles, Howard Hawks, Billy Wilder and John Huston, as well as directors who came to specialise in the genre such as Robert Siodmak, Fritz Lang and Otto Preminger.

Tellingly, many of these craftsmen were of European extraction and brought their expressionist influences with them, in turn influencing generations of filmmakers right up to the present day.

The classic noir era is considered to span from the early 1940s to the end of the 1950s and its parameters were infinite, hence the inclusion of a couple of debatable entries in this list of the 20 greatest from the classic era of film noir.

20. Kiss Me Deadly (Robert Aldrich, 1955)
The movie that virtually killed off the classic knight errant private eye forever. Aldrich’s version of Mickey Spillane’s Mike Hammer as a rage fuelled amoral misanthrope bulldozing his way through a storyline of Cold War paranoia in the nuclear age barely pauses for breath or releases its brutal hold on the viewer until the literally apocalyptic ending.

19. The Big Heat (Fritz Lang, 1953)
Memorable then as now for the shocking scene when sadistic thug Lee Marvin throws boiling coffee over his moll, Gloria Grahame. Righteous cop Glenn Ford then teams up with the disfigured moll to bring the guilty parties, cops as well as gangsters, to book for the murder of his wife. An essential example of Lang’s relentless and unforgiving auteur style.

18. The Big Combo (Joseph H Lewis, 1955)
Obsessive cop Cornel Wilde vows to bring down insidious crime lord Richard Conte but finds his judgement flawed by his attraction for the gangster’s mistress. Claustrophobic, shadow filled cinematography, a torture scene involving a hearing aid and some infamously overt sexual imagery have helped make The Big Combo a cult item that flaunted the Hollywood production code.

17. Detour (Edgar G Ulmer, 1945)
A bona fide low-budget cult classic this one, and all in less than 68 delirious minutes. Hitchhiker Tom Neal is unable to stop the chain of events that lead to his downfall after being picked up by on the highway by a driver who then ups and dies on him. Neal takes the deceased’s car and identity but is soon rumbled by trampish Ann Savage, who puts the squeeze on the hapless dope. Savage’s demise is a doozy and has to be seen to be believed.

16. Murder My Sweet (Edward Dmytryk, 1944)
Song and dance man Dick Powell as Philip Marlowe forged a whole new tough guy career for himself in this version of Raymond Chandler’s Farewell My Lovely, with Mike Mazurki in the role he was born to play: slow-witted ex-con Moose Malloy. Innovative sets and lighting and the first-person narration established Dymtryk as an early noir pioneer and Chandler himself considered Powell as close to his ideal screen Marlowe.

15. Laura (Otto Preminger, 1944)
Free spirit Laura is found murdered, but it’s a case of mistaken identity. The real Laura (a luminous Gene Tierney) turns up and the detective in charge of the case who is initially entranced by Laura’s portrait and then by Laura herself, must unravel the mystery. Mesmerising, elegant, and wonderfully stylish with a stand out performance from Clifton Webb as the effete, waspish newspaper columnist who types in the bath. And did I mention that unforgettable theme from David Raksin?

14. The Killers (Robert Siodmak, 1946)
Famous adaption of the Hemingway short story about an insurance investigator piecing together the mystery of why ex-boxer Burt Lancaster (in his movie debut) was murdered by hit men after he “did something wrong once”. In the signature flashback scenes we find out just what. A smouldering Ava Gardner has a lot to do with Lancaster’s demise, but the film is most famous for its opening 10 minutes as two shadowy figures drive through the New Jersey night, terrorise a diner owner and then blast the acquiescent Lancaster to death, all set to Miklos Rozsa’s doom-laden soundtrack.

13. Night and the City (Jules Dassin, 1950)
Blacklisted by Hollywood, Dassin relocated to London for this lacerating tale of spiv Harry Fabian (Richard Widmark) who always seems to find himself behind the eight ball despite his grandiose plans. Widmark is sensational as the doomed protagonist always running from someone or something as his life spirals out of control.

12. Touch of Evil (Orson Welles, 1958)
Welles plays Hank Quinlan, a good cop gone bad who “never framed anybody – unless they were guilty” in this stunning reminder of Welles’s genius. As ever, Welles lost control of the final cut of the movie and wrote an impassioned 58-page memo to the head of Universal Studios but to no avail – until finally in 1998 a restored version close to his original vision appeared. Welles’s last great film is chock-full of overlapping dialogue, unsettling close ups and dizzying camera angles, and is especially memorable for the three-minute opening sequence tracking a bomb-laden car and the eventual explosion. The inevitable demise of the monstrous Quinlan plays like a Shakespearean tragedy.

11. Sweet Smell of Success (Alexander Mackendrick, 1957)
Burt Lancaster and Tony Curtis compete compellingly as to who plays the most venal character in this infinitely cynical tale about the machinations of Lancaster’s ruthless newspaper columnist (based on Walter Winchell) and Curtis’s “cookie full of arsenic” press agent. A searing script, outstanding cinematography from James Wong Howe and MacKendrick’s barely concealed distaste for his subject, along with the performances make for a fascinating, lurid take on the traditional noir themes. There are no gangsters, no guns, no one is killed, but Sweet Smell of Success is the blackest of noirs.

10. The Killing (Stanley Kubrick, 1956)
27-year-old Kubrick produced his first masterwork, which served as the prototype for Reservoir Dogs, about a racetrack heist that goes wrong and the aftermath. A brilliant ensemble cast of noir regulars but special kudos to Timothy Carey as a crazed sniper and a gloriously sluttish Marie Windsor whose actions are the catalyst for the disastrous chain of events.

9. Criss Cross (Robert Siodomak, 1949)
One of the joys of classic era noir was watching he-men like Robert Mitchum and Lancaster cast as the prize chump manipulated by femmes fatales as in this, possibly the most underrated film noir of all. A payroll heist goes wrong as Lancaster is drawn into a web of intrigue by his ex-wife Yvonne De Carlo and zoot suited gangster Slim Dundee, played by the great Dan Duryea. Director Siodmak’s mastery of the genre is exemplified by the opening aerial tracking shot of Lancaster and De Carlo caught in a nocturnal clandestine embrace in a car park and the unfolding of events via a series of dreamlike flashbacks.

8. Nightmare Alley (Edmund Goulding, 1947)
Once described as the greatest movie not made by arch cynic Billy Wilder, Tyrone Power gives his finest performance as the fairground hustler who works his way into society by fair means and foul, including murder. But Power’s fall is every bit as precipitous as his rise as he ends up back in the fairground as the carnival geek in this remarkable and disturbing movie.

7. Out of the Past (Jacques Tourneur, 1947)
Noir icon Robert Mitchum gives an archetypal performance as the fatalistic private eye unable to escape his former life after slimy gangster Kirk Douglas hires him to find the squeeze (Jane Greer as the baddest bad girl in noir) who shot him and stole his money. Duplicitous dames, hard-boiled dialogue, flashback sequences and world-weary voiceover from the laconic Mitchum all find their apotheosis in a movie that defines film noir.

6. The Asphalt Jungle (John Huston, 1950)
Definitive caper movie involving the planning, preparation and execution of a jewellery heist that goes wrong. Told from the criminals’ perspective in a semi-documentary style, The Asphalt Jungle ushered in a whole new type of realism and was hugely influential.

5. In a Lonely Place (Nicholas Ray, 1951)
Humphrey Bogart gives his most ambiguously compelling performance as the washed up, near psychotic writer suspected of murder. Bogart’s volcanic relationship with noir’s greatest good-bad girl Gloria Grahame is the core of a film that contains the genre’s most fatalistic and memorable coda as Bogart reflects, “I was born when she kissed me. I died when she left me. I lived a few weeks while she loved me.”

4. The Maltese Falcon (John Huston, 1941)
From the Dashiell Hammett novel, Huston’s first movie as director is the grandaddy of noir thanks to a sparkling cast, moody lighting and brilliant screenplay and direction. The byzantine plot revolves around the search for the prized artefact of the film’s title and makes for wonderful entertainment. Bogart’s Sam Spade became the model for the cynical yet romantic tough guy antihero that would populate noir for years to come.

3. Sunset Boulevard (Billy Wilder, 1950)
Some movie scholars don’t think of this as noir, more black comedy meets gothic melodrama, but consider the following. The film opens with a dead body face down in a swimming pool. Said dead guy is narrating the movie. Said dead guy uses ageing woman to further his career. Ageing woman uses dead guy for sex and then kills him when he rejects her. There’s a flashback theme and handsomely baroque production values. Norma Desmond. Billy Wilder. Discuss.

2. The Big Sleep (Howard Hawks, 1946)
Justly famous and celebrated adaption of Raymond Chandler’s convoluted novel featuring Humphrey Bogart as many people’s ideal Philip Marlowe. Chandler’s core story, peerless sexual innuendo between Bogart and Lauren Bacall that somehow slipped past the censors, and Hawks’s mastery of the medium combine for an American classic that in Hawks’s words “holds out its hand for a right turn signal, then takes a left”.

1. Double Indemnity (Billy Wilder, 1944)
From the James M Cain novel and featuring taut direction and a sparkling script from Wilder and Raymond Chandler, Double Indemnity set the standard for the genre for years to come. Fred MacMurray is brilliantly cast against type in this landmark film as the cocky insurance salesman seduced by quintessential femme fatale Barbara Stanwyck (never better) into murdering her husband. Edward G Robinson is also memorable as MacMurray’s boss whose “little man” inside him tells him something’s not quite right about the case. Miklos Rozsa’s insistent, foreboding soundtrack acts as a leitmotif for MacMurray’s descent into hell as the innovative first-person narrative tells us after the murder, “I couldn’t hear my own footsteps. It was the walk of a dead man.” Hailed as an instant classic, Double Indemnity retains its awesome power and fascination over 70 years since its release. An impressed Alfred Hitchcock, no less, sent Wilder a telegram that read “Since Double Indemnity, the two most important words in motion pictures are ‘Billy’ and ‘Wilder.’”

Keeping up with Kris Jenner is not easy