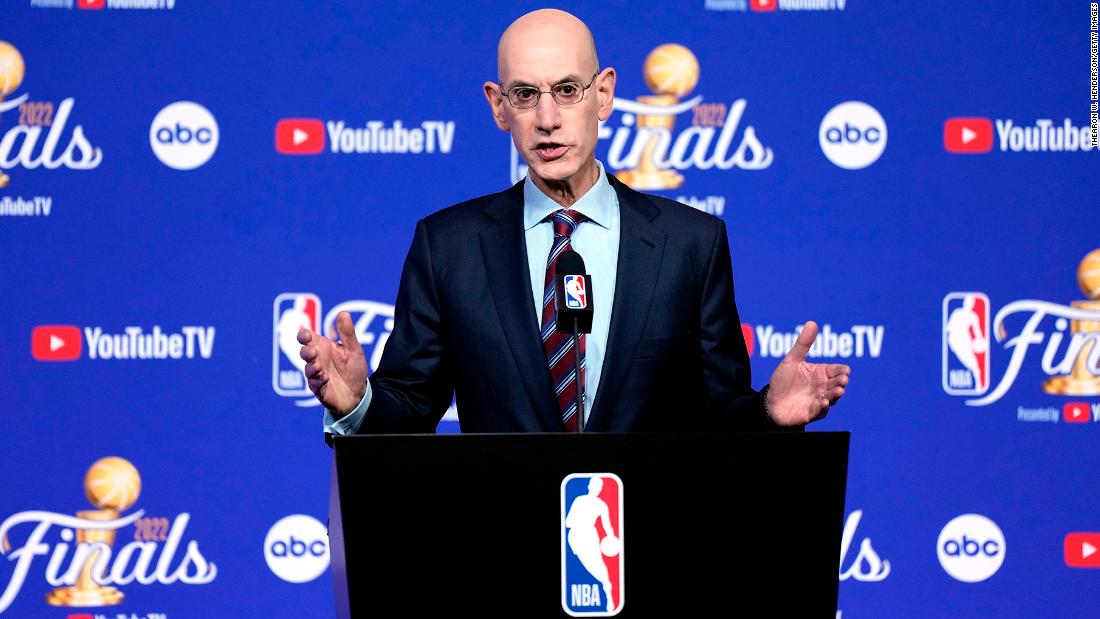 A tweet in support of pro-democracy supporters in Hong Kong by then-Houston Rockets general manager Daryl Morey sparked a diplomatic storm between the NBA and China.

After the league had initially distanced themselves from Morey’s tweet, expressing regret for offending “friends and fans in China,” Silver later came out in support of the coach in terms of his freedom of expression.

Chinese state-run television network CCTV subsequently stopped airing NBA games in the country due to “strong dissatisfaction” over Silver’s comments, before ending their blackout in March by broadcasting the Los Angeles Clippers’ game against the Utah Jazz.
Speaking at his customary press conference ahead of the NBA Finals on Thursday, Silver told reporters he believed “positive” steps had been made, regardless of the financial cost.

“My position is … engagement is positive, particularly through sports,” Silver said.

“To keep people safe and prosperous, using sports as a platform to keep people around the world talking is critically important.

“At the same time, I don’t think it’s inconsistent with our values for our game to be broadcast in China and 200-plus other countries in the world. So that’s where things stand.

“Very specifically, I think it’s a positive thing right now that we are exporting this Americana, NBA basketball and the messages that come with it, to China,” Silver added.

Free agent NBA player Enes Kanter Freedom has used his social media platform to criticize China’s treatment of the Uyghur community and had called for a boycott of February’s Winter Olympics in Beijing.

The 30-year-old former Boston Celtic’s comments on the Games prompted a backlash in the Asian nation, drawing criticism from the government and leading to Celtics games being pulled from Chinese video streaming site Tencent.

Freedom is now a free agent after being waived by the Houston Rockets in February, a move that he alleged to the New York Times in March was due to his activism.

Silver denied the claim, telling the Times that he had spoken to Freedom to “make it absolutely clear to him that it was completely within his right to speak out on issues that he was passionate about.”

At his press conference Thursday, the commissioner cited the large financial losses as evidence that the NBA would “stand behind” its players’ freedom of speech.

“We accept that [the losses],” Silver said. “If those are the consequences, that’s what I mean that our values travel with us.

“Others since then have spoken out about their views around China and other places in the world. If the consequences are that we’re taken off the air or we lose money, we accept that.”

Discussing his desire to see female head coaches in the NBA, Silver admitted there was a “glass ceiling” to break through.

In December, Becky Hammon — the first full-time female assistant coach in NBA history who was with the San Antonio Spurs — announced she would be leaving her role at the end of the season to take on the head coaching role at the Las Vegas Aces in the WNBA.

Hammon, revealing she had interviewed for multiple NBA head coaching positions, told reporters in January that the move was a “step forward.” The six-time WNBA All-Star has made a scintillating start in Vegas and was crowned the league’s coach of the month en route to an all-time best 9-1 opening record by a new coach.

Praising Hammon’s move as a “terrific opportunity,” Silver asserted there was “no reason” why the NBA should not employ more women as coaches and officials.

“In the same way that we have made progress in terms of Black coaches, it requires constant dialogue,” Silver said.

“We’ve got to stick with it, but I would love to see that breakthrough happen sooner rather than later.”

Silver opened his press conference with an update on Brittney Griner, the WNBA player who has now been in detention in Russia for over 100 days.

The two-time Olympic gold medalist was arrested in February at a Moscow airport after Russian authorities accused her of smuggling significant amounts of a narcotic substance, an offense punishable by up to 10 years in prison.

Earlier this month, a Russian court extended the 31-year-old athlete’s pretrial detention until at least June.

The US State Department has stated Griner is being wrongfully detained, with Silver revealing that the NBA was working alongside the government to negotiate her release.

“I didn’t want to not mention Brittney Griner while I’m here,” Silver said. “I think it’s something that all of us should be heard on, contacting your representatives and others.

“Our hearts go out to her and her family, and just are eager for her safe return.”