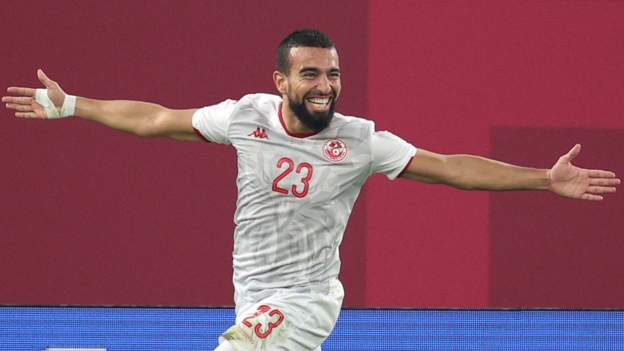 Naim Sliti scored one and set-up two goals as Tunisia began their 2023 Africa Cup of Nations qualifiers with a 4-0 win over Equatorial Guinea.

The Carthage Eagles completely dominated the Group J game but it took them until the second-half to break down the visitors stubborn resistance.

Sliti had one goal ruled out before he eventually grabbed the opening goal and then set up substitutes Saifeddine Jaziri and Youssef Msakni, who completed the rout late on.

Equatorial Guinea, who had reached the quarter-finals of the Nations Cup in Cameroon earlier this year, ended the game with 10-men after Joan Lopez Elo was dismissed for two yellow cards.

Tunisia’s win came in front of a just a few thousand fans, despite it being free to get in, and despite their early dominance they struggled to create many real chances.

Firas Ben Larbi had a shot blocked, Ferjani Sassi’s best effort was straight at goal keeper Jesus Owono while Ali Abdi saw his effort fly across the face of goal inches away from being touched in.

Tunisia thought they had taken the lead six minutes after the break when a shot from Sliti squirmed past Owono but the referee ruled that he started dribbling before Ben Larbi’s slight touch on a free kick had moved the ball far enough.

Five minutes later Sliti did score as he pounced on the ball to score form close range through Owono’s legs as the Equatorial Guinea defence failed to clear the ball.

With just under 20 minutes left to play Equatorial Guinea were reduced to 10 men as second-half substitute Lopez Elo was dismissed.

Tunisia made the extra man count in the last 13 minutes as Sliti turned provider, swinging in a cross for Saifeddine Jaziri to head home with his very first touch in the game after coming on as a substitute.

The third goal came in the 79th minute as Youssef Msakni, who had come at the same time as Jaziri, fired home after picking a pass from Sliti.

Msakni added his second minutes later as Owono could only parry a shot from Abdi into his path.

Next up for Tunisia is a trip to play Botswana on Sunday while Equatorial Guinea return home to welcome Libya a day later.

Meanwhile in Group L despite Mozambique enjoying two-thirds of the possession against Rwanda they had to settle for a point in a 1-1 draw.

Rwanda’s Nishimwe Blaise opened the scoring in the 65th minute but the lead lasted just three minutes with German-born Stanley Ratifo getting the equaliser.

The match was played in Johannesburg, South Africa, as Mozambique do not have a stadium that meets regulations to host international matches.

Rwanda had been due to host Senegal in their second Group L game but with work continuing on their stadium in Kigali the Teranga Lions agreed to swap hosting duties.

It means Amavubi will now travel to face the African Champions in Dakar on 7 June with Rwanda hoping to host the reverse fixture next March.

Mozambique’s next game is in Cotonou against Benin on 8 June.

All kick-off times in GMT.

From Dos Santos to Mugabe – the burial disputes over ex-leaders