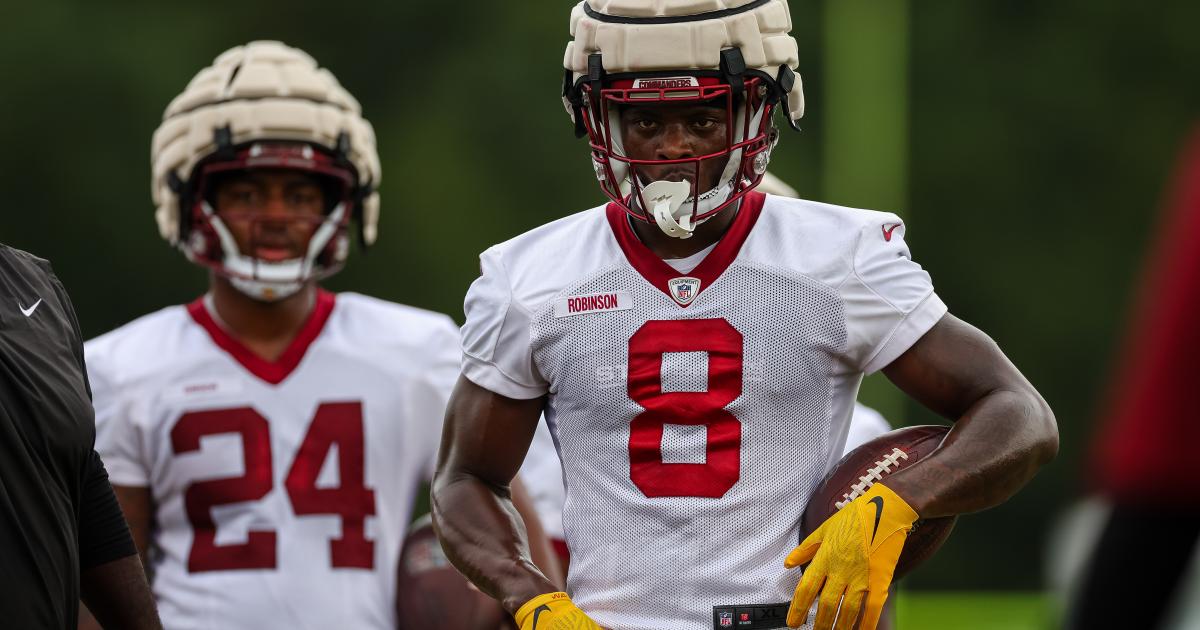 The organization now known as the Washington Commanders has endured a roller-coaster of a 21st century, and the ups-and-downs seem to be continuing into the 2022 NFL season. This year, Carson Wentz will lead a young offense into what DC fans hope will be its first winning pro football season since 2016. But question marks remain, and from a fantasy football perspective, the most looming one pertains to the Commanders’ backfield — who will be the starting running back in Week 1: third-year back Antonio Gibson or rookie Brian Robinson Jr.?

Eight months ago, it would have seemed like a preposterous notion to start a rookie over Gibson, who has scored double-digit touchdowns in each of his pro seasons and notched over 1,300 scrimmage yards in 2021. However, Robinson has impressed right off the bat, and he seems to already be winning the favor of Washington head coach Ron Rivera and offensive coordinator Scott Turner.

So, which Commanders RB should you draft to your fantasy team, and at which point in the draft are Gibson and Robinson Jr. going to provide the most value? Let’s evaluate this unique situation with up-to-date stats and intel.

When GIbson was a rookie two years ago, he only had to worry about three things: health, third-down and goal-line snaps, and target share. Veteran pass-catching back J.D. McKissic seemingly stunted Gibson’s growth potential from Day 1, but when the elder RB got hurt toward the latter part of last season, the seas of fantasy goodness parted for Gibson.

At last, Gibson had the backfield pretty much to himself. The second-year back out of Memphis took full advantage of his first batch of consistent 20-plus touch games, locking in his first 1,000-yard rushing season. All told, he turned 300 touches into 1,331 all-purpose yards and his second-straight campaign with 10-plus touchdowns.

Great, right? Well, let’s pump the breaks, scratch the record, or do whatever else you would metaphorically do to say “not so fast.” Downsides exist with Gibson, as well. For starters, he put the ball on the field way too much. He led all RBs with six fumbles and four fumbles lost — and coughed it up against Carolina in Week 2 of this preseason (for which he still appears to be in the doghouse). He also proved less efficient last year than in his rookie season — dropping from 4.7 yards per rushing attempt to 4.0, and from 5.1 yards per touch to 4.4.

Then, there are the injuries. According to the Draft Sharks Injury Predictor tool, Gibson suffered four different lower-body injuries between September 2021 and January ’22: a stress fracture in his shin, a calf injury, a toe sprain, and a hamstring strain. He initially suffered a turf toe-related injury in his rookie season, but he played through it in his sophomore campaign. Many experts believe these injuries affected his efficiency last season.

Regardless of the real reasons, it seems clear at this point that Rivera and Turner’s trust in the young back is not exactly overflowing. The first troubling report involved McKissic, who initially planned to sign a contract with the high-flying Bills. When Washington abruptly matched the offer — after not even previously offering the vet any deal — McKissic quickly reneged on the Bills and returned to the Commanders.

Then Washington selected Robinson Jr. in the third round of the 2022 NFL Draft. Early on, Rivera alluded to using Gibson and Robinson in a similar fashion to how Rivera used DeAngelo Williams and Jonathan Stewart in his Carolina days. Again, none of this is inspiring trust in the prospect of owning Gibson shares in fantasy.

Then, this preseason put the cherry on top of an already-SUS Washington pie. On Saturday against the Chiefs, the Commanders handed Robinson the first backfield carry and started Gibson on special teams as a kick returner. Rivera’s squad saw Robinson carry the ball eight times for 31 yards in the first half, while Gibson managed just three yards on two carries.

It should be noted that Gibson added 37 yards on three catches, a detail that bullish Gibson owners will lean on, but consider the fact that McKissic sat out Saturday night. When he’s active, McKissic is the pass-catcher in DC. He has caught 123-of-163 targets in his team in the nation’s capital, and only fumbled the ball three times in 256 touches. Be afraid, Gibby believers. Be very afraid.

When Robinson first got drafted to the Commanders, Gibson fans, keepers, and dynasty owners probably feared the possibility the rookie would eat into their back’s touches. None of us saw the potential of Robinson just completely supplanting Gibson from the depth chart. That’s now the reality. One thing to know about Robinson is that you can never underestimate the kid.

Robinson, a Tuscaloosa native, spent four years at Alabama as a backup running back. Despite his per-carry averages and total TD count increasing in both his junior and senior year, he never got promoted to starter. Instead of licking his emotional wounds and declaring for the draft after four years, Robinson took the optional fifth-year (thanks to COVID-19) and ran over the entire NCAA.

As a fifth-year senior, Robinson recorded 1,343 rushing yards on 271 carries (5.0 yards per). He netted 1,639 yards from scrimmage. He scored 14 ground TDs and two through the air. This was all despite one of Alabama’s worst offensive lines in the Nick Saban era and in spite of Robinson suffering three cracked ribs and a pulled hamstring early in the season.

In the Cotton Bowl, Robinson put the Tide on his back with star wideout John Metchie sidelined. The back rushed 26 times for an Alabama Bowl-record 204 rushing yards, and ‘Bama beat Cincy 27-6. He totaled 96 yards in the Crimson Tide’s National Championship loss to Georgia.

It’s pretty easy to see why Rivera likes Robinson. He’s a tough, physical runner who can churn out a ton of yards and establish solid breakaway speed after contact. At 6-2, 225 pounds, he has the size and strength to bulldoze but the vision and footwork to also elude would-be tacklers. If not for Damien Harris, Najee Harris, and Josh Jacobs burying him on the ‘Bama depth chart, this guy would be a household name by now.

We have seen Robinson bet on himself and continue to defy his own situational constraints, so it stands to reason that he could very well land as the Week 1 starting RB for this Washington football club. We don’t have a magic 8-ball handy, but “all signs point to” Robinson leap-frogging Gibson on the depth chart. It appears the rookie’s upside simply serves as a greater appeal to Rivera.

At present, FantasyPros has Gibson’s ADP in the early-to-mid 40s while Robinson remains in the 140s. This is a clear example of why you must do preseason fantasy research before draft day — Gibson could not possibly be a worse value in the third or fourth round — in fact, he probably doesn’t deserve consideration until the seventh or eighth round of PPRs. He has not been trusted in the red zone the past two seasons, and now he might not be trusted whatsoever. Meanwhile, Robinson has the chance to be a league-winner.

Target Robinson anywhere after the fourth round. No, seriously! He’s the starter in Washington until we hear more, and we’ve already seen how effective he can be under the bright lights. He has NFL-ready size and strength, and a coaching staff that clearly believes in him. You are better off with a high-upside starting RB than a sleeper WR or handcuff RB. There’s no question Robinson deserves the earlier pick — the only question now is how early savvy bettors will start drafting him after this past weekend.

The pick is … Robinson — by a landslide

Who will save the BBC from itself now?

Who will save the BBC from itself now?