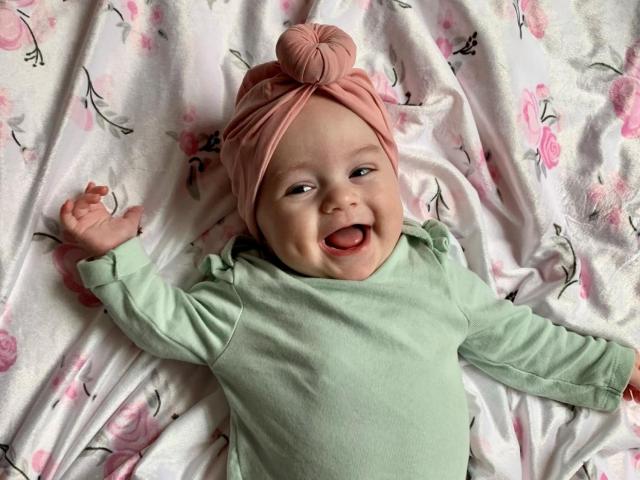 Apex, N.C. — Emmy was born at UNC Rex just over one year ago. Before going home with her parents and big brother, the family was given startling news.

“We had a very straightforward, uneventful pregnancy,” said Alyssa Hiller, who described Emmy’s birth as “very exciting up until it wasn’t.” Ten minutes after giving birth, Alyssa and her husband Dan learned something was wrong.

During newborn Emmy’s physical exam, the nurses noticed strange bumps on her body. Emmy underwent multiple tests in the following days and weeks and was diagnosed with infantile myofibromatosis, a rare disease leading to the development of multiple tumors.

Little Emmy had tumors growing in her brain, her lungs and throughout her body. At only 3 weeks old, she began what would become one year of chemotherapy.

Emmy underwent brain surgery when she was 10 months old.

“You never want anything to be wrong with your baby,” Alyssa said. “We really missed out on that mushy gushy infant phase because we were discharged from the hospital wondering if she going to make it. But we found out something was wrong right away, and that truly saved her life.”

Although Emmy’s tumors were benign, their growth threatened to disrupt the function of her vital organs.

Despite medical setbacks along the way, Emmy got through her chemotherapy “completely unfazed,” Dan and Alyssa said.

“We thought she’d be drowsy and tired, but she was just her complete normal self,” Alyssa said. “Every single time we came home [from chemo], it didn’t stop her development or her demeanor. She was unaffected.”

Still, Alyssa struggled, not knowing if her baby would survive. She and Dan leaned on each other through the hardest times.

“I just remember one day I just kept saying, ‘I wish I knew what was gonna happen. I wish I knew what the future held,’ and Dan said, ‘No one knows what’s going to happen in the future, no matter what the situation is. So let’s just focus on each day and let’s be present.’ And I always remember that because [I realized] I had to change my mindset from what’s next to ‘I’m here right now. She’s here right now.'”

The family moved from Boston to Apex in March 2020, right before the pandemic. They had looked forward to meeting other families in the area, but pregnancy and a sick baby made COVID-19 even more isolating.

“It’s been years indoors and away from other people,” Alyssa said. “There were a couple extra layers for us that made the isolation more elongated.”

Thankfully, when Emmy was born, Alyssa and Dan were able to count on their parents, who live nearby.

“My parents lived 10 minutes away and pretty much took my son in, as we were at appointments pretty much every single day for the beginning phases,” Alyssa said. “Dan’s parents were here all the time as well.”

It takes a village to raise a baby, especially one with medical problems. Alyssa and Dan were cared for by their parents, who created a schedule and worked together to keep things running, along with cousins, siblings and neighbors, who provided food for the family and toys and companionship for Emmy’s big brother.

The compassion others showed their son meant a lot to Dan and to Alyssa, who, in addition to postpartum recovery, was feeling guilty focusing so much time on her new baby, who required extra care.

“At no point do I think did our son ever really knew what was going on,” Alyssa said. “He’s been very spoiled in the process, and he’s a happy little kid.”

On June 10, after a clear body scan, Emmy got the all clear to stop treatments. She will get another scan in three months to make sure the tumors don’t come back and, eventually, the time between her scans will increase.

There is still a lot to learn about infantile myofibromatosis, which is very rare, but Emmy’s parents and doctors are hopeful the disease is behind them.

“The hope is that we’re done forever,” Alyssa said. “However, we’re always cautiously optimistic about what the next steps are.”

Their advice for parents going through hardships? Depend on your community and have a support system in place.

“We are very private people, and we don’t like asking for help, but it came to a point where we needed it,” Alyssa said.

“Obviously, a great healthcare team is tremendous, but I think not being afraid to advocate for yourself and to ask questions is crucial,” Dan said. “Just because you as a parent are not a medical professional doesn’t mean that you’re not entitled to understand what’s going on.”

Dan and Alyssa said they can’t show enough thanks for the team of UNC doctors and nurses who supported them in the last year. Alyssa said Emmy’s chemotherapy nurse, who has been working with the family since Emmy was 3 weeks old, has become one of her good friends. They also cherish their oncologist, Dr. Gerardo Quezada.

“He’s such an expert and he’s such a kind and compassionate man,” Alyssa said. “He’s so humble, and he’s not afraid to reach out to other oncologists who’ve treated this disease to get their opinions.”

Dan and Alyssa were inspired to see their doctors working together, even calling on doctors from other countries, to learn more about Emmy’s rare condition. Alyssa used social media to find other parents with babies with the same disease or in similar situations and documented Emmy’s story on Instagram.

One day, a mom going through another serious childhood disease told Alyssa, “One day, this grief is going to become your superpower.”

“That always stuck with me,” Alyssa said. “At that point in time, it was a great line, but it was in one ear and out the other. Now that we’re on the other side of this, hopefully forever, I want to be able to help other parents in this position that no one wants to be in. I’ve learned so much along the way from other moms that I feel the need to hold someone else’s hands the way that these moms and parents guided me throughout the last year.”