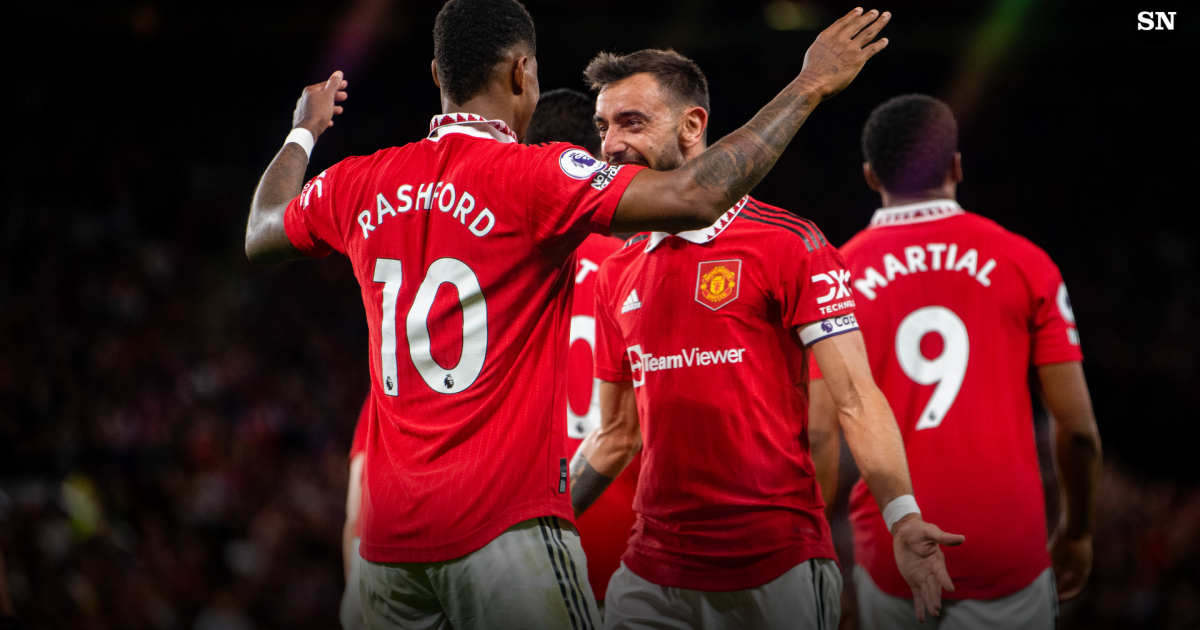 “No tippy-tappy from the back this week,” Gary Neville guffawed as David de Gea larruped his latest kick up the field.

Mainly, it was nice to hear Neville having a semblance of fun on a Sky Sports broadcast again. Tortured state-of-the-Manchester-United-nation addresses start to feel tired after a while.

It is highly unlikely that Erik ten Hag has parked a lifetime of Ajax schooling and decided the solution to United’s woes is to have his goalkeeper launch the ball back to the opposition at every opportunity. But De Gea’s refusal to tempt the yapping Liverpool press was one example of a coach, who is already under a harsh microscope, getting the template absolutely right during Monday night’s 2-1 win.

Ten Hag will continue to juggle the demands of the present with hopes of a long-term transformative project at United. Bad short-term decisions have led the club to their current predicament and the final 10 days of the transfer window should be approached with vigilance.

On the other hand, you can’t get soundly outplayed by Brighton & Hove Albion before being hammered by Brentford and pick a team for fanciful sunlit uplands a few months from now. United’s 5-0 humiliation in this fixture last season was fresh in the memory with good reason.

This Manchester United will play out from the back again. De Gea will pick the wrong pass, stand on the ball, fall over or any combination of the three at some point and fingers will again be pointed at the Old Trafford brain trust.

Against an injury-hit and bizarrely lukewarm Liverpool, that club was put back into the bag. De Gea had 40 touches and lost possession 23 times. United’s players treated this like a ferocious derby scrap from the first whistle, while their opponents had not unreasonably been persuaded to expect a walkover sparring session.

5️⃣ of the top 6️⃣ players for sprints in the first half were from Man United:

Lisandro Martinez, so maligned after having the audacity to be 5ft 9ins tall at Brentford, bought into the occasion with some snarly shoulder-barging on Mohamed Salah within the first minute. The Argentina defender, one of Ten Hag’s trusted lieutenants at Ajax, was fantastic throughout as he and Raphael Varane clattered through 16 clearances between them.

Their pairing was one of Ten Hag’s big calls. Harry Maguire has looked like a footballer enduring existential torment too often over the past year and it was hard to argue against the decision to take him out of the firing line, whatever that might mean for his captaincy of the club.

Maguire might have slightly envied how cohesive and committed the players operating in front of the back four were all night. He’d have looked like a much better centre-back at Brentford if everyone in the front six hadn’t been basically rubbish.

That energy up front — best typified by a suddenly engaged and enlivened Marcus Rashford, whose swift emergence from his prolonged funk can give Maguire reason for optimism — brings us to Ten Hag’s other big call: Cristiano Ronaldo was benched in favour of Anthony Elanga and Rashford started at centre-forward.

Even when the Dutch tactician switched things up at halftime, Anthony Martial replaced Elanga and played in Rashford on the cusp of offside for United’s second goal. The main purpose of Ronaldo’s late introduction seemed to be to rouse a little more energy from a crowd who had already shouted themselves hoarse in celebration as opposed to the anticipated protests.

7️⃣ months of misery for Marcus Rashford are over, as the Man United striker finally ends his goal drought!

🔴 The Red Devils are heading for a first league win over Liverpool since 2018. #MUNLIV #MUFC #LFC pic.twitter.com/1RFzWVuhfQ

United moved quickly and with purpose whenever they had the opportunity to attack during a rip-roaring opening 20 minutes. Instead of being mired in midfield sludge or measuring his usefulness in terms of how best to service Ronaldo, Bruno Fernandes was liberated.

Wearing the armband in Maguire’s absence, Fernandes stamped himself all over United’s best attacking moments, gleefully picking out the willing runners ahead of him — especially those attacking the comedically porous union between Trent Alexander-Arnold and Joe Gomez on the right of Liverpool’s defence. Both were utterly abject and the rest of their colleagues were frequently left chasing shadows as United covered 113.8 kilometres over the course of the 90 minutes. At Brentford, they forlornly shuffled their way to 95.5km, well below their opponents’ figure, and were called in on a day off to make up the shortfall.

Fernandes was at the heart of Jadon Sancho’s brilliantly taken opener, first thundering a ball down the right for Rashford to hare after. He got possession back and fizzed a pass across the box that Christian Eriksen did well to control. It wasn’t precise, or particularly well-executed, but it kept United moving and did not allow Liverpool to set themselves.

Calm as you like from Jadon Sancho and Manchester United lead at Old Trafford! 💥 pic.twitter.com/7ZkB2jf1FO

Some playmakers are better when they have the chance to pop their foot on the ball and think; Fernandes is one of those who is better when he doesn’t. He likes to act and impose himself when the pace is fast and possibilities are at hand.

He was one of several United players who appeared to come back to themselves as they outplayed Liverpool, something that could also be said for Sancho as his soft-shoe shuffle made James Milner look like he’d careered off a water slide and turned Virgil van Dijk into a handcuffed Liam Gallagher.

During all the setbacks of recent seasons, it has been too easy to look elsewhere in the squad or to the transfer market for the answers to United’s problems. Ten Hag laid out some solutions on the pitch to down Liverpool. It’s now up to Maguire and Ronaldo if they want to be a part of that on the manager’s terms.

The Queen inspired devotion, respect and love – but never deliberately...

The Queen inspired devotion, respect and love – but never deliberately...