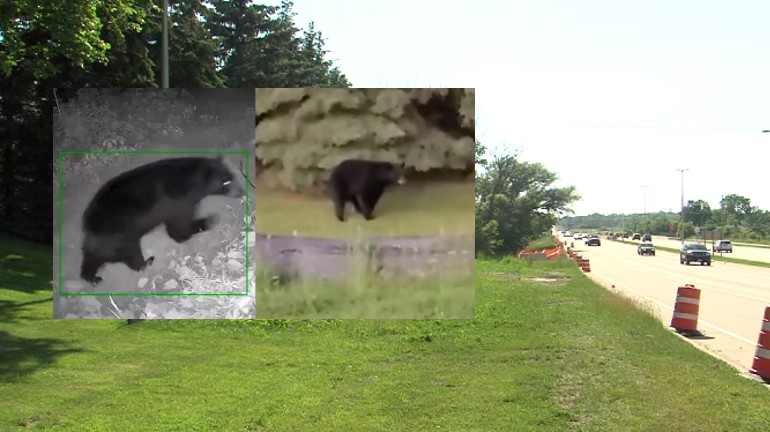 It happened around 1 a.m. near the Hale Interchange and 92nd Street, not far from where deputies confirmed a black bear was spotted Tuesday in Franklin.

A resident captured this video of a bear in Franklin on Tuesday, June 21.

According to the Milwaukee County Sheriff’s Office, the bear was struck and killed by a truck in lane one from the north to the east in the Hale Interchange.

The lane was closed for about an hour while the bear was removed, and the Department of Natural Resources was notified.

The black bear is now in possession of the DNR. Sara Fischer, who is with the DNR, said it weighs approximately 150 pounds.

Fischer said the bear has been inspected and was healthy. She said the bear will be kept at the DNR and used for educational purposes.

While it’s impossible to know for sure at the time, the DNR believes it’s likely that the recent bear sightings are related.

“This year has been odd with the number of reports that we’ve been getting, especially with it being so close to Milwaukee. We think it’s likely multiple reports of the same one or two bears,” Fischer said.

DNR officials told CBS 58 that it is the tail end of mating season, when young male bears often move to find new territory, mates and easy food, which sometimes leading them to more populated areas. Fischer said there are a few things you can do to keep the bears away from your home.

“Definitely bring in bird feeders, and clean your grills, after you use them to eliminate as many of those smells as you can, bring in any pets and pet food at night, as well as putting your garbage cans in an enclosed area like your garage,” Fischer said.

Officials explained black bears typically don’t want to hurt people and small animals, but they can be unpredictable, so you should be cautious if one is nearby.

“If you do see a bear, do not run. Make as many loud noises as you can to try to scare it off, so you and the bear are safe,” Fischer said.

The DNR said if you see a bear or catch any camera footage of one, you’re encouraged to fill out the Large Mammal Observation form on their website HERE.

No people were injured in the crash.

It is not clear if the bear killed is the same bear as the one spotted in Franklin Tuesday.