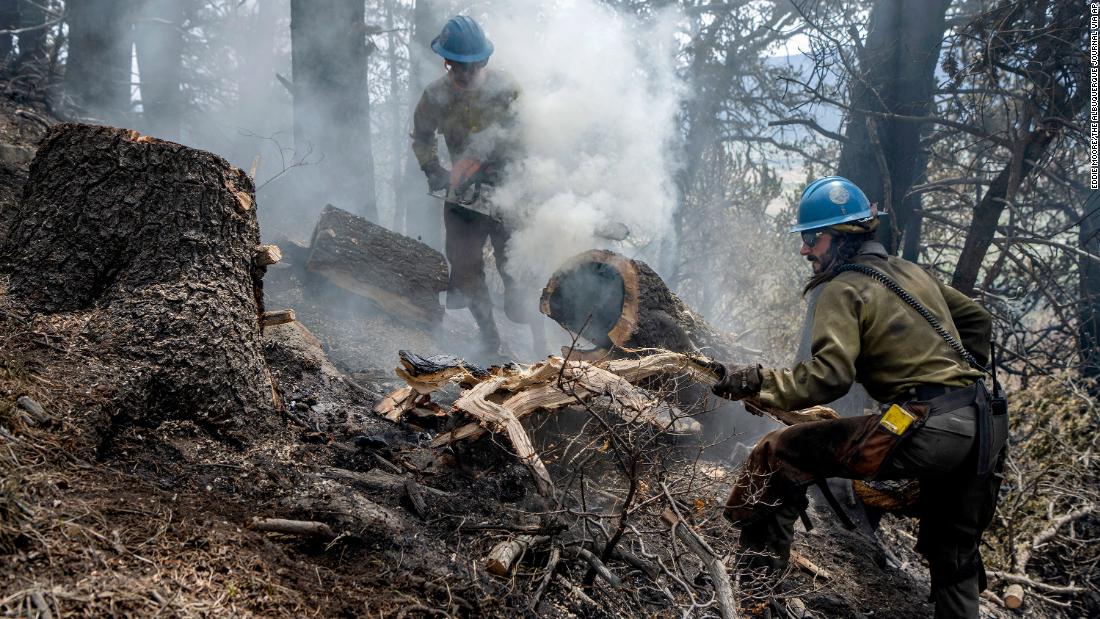 The two wildfires — the Hermits Peak/Calf Canyon Fire just northeast of Santa Fe and the Black Fire in the Gila National Forest — continue to burn at a historic pace.

Both fires broke the previous record of 297,845 acres from the Whitewater-Baldy fire in 2012.

Not only have the fires consumed more than 600,000 acres of combined forest lands, they have also led to over $220 million to battle the blaze.

With June and July typically being two of the most active months for wildfires in the state, this total is expected to grow.

Factoring in the more than two dozen other smaller fires across New Mexico this year, more than 825,000 acres have burned, which is about four times the yearly average for the state.

Why this year is so bad

“With it being drier and significant wind events, the fuels and fire danger increased rapidly in April,” Wallmann said. “We were seeing record setting conditions for New Mexico in May.”

The wildfires come in another year of severe drought for the Southwest. The most recent US drought Monitor report Thursday morning showed an increase in exceptional drought, the highest level, which now covers nearly 50% of New Mexico.

The one thing the area really needs is a good monsoon season to not only help with the fires, but also build up the reservoirs. This Southwest monsoon season typically begins in July and ends by the middle of September. However, the three-month rain outlook from the Climate Prediction Center shows below normal rain for the Hermits Peak/Calf Canyon fire area. The only western region expected to see above average rainfall will be portions of Arizona and southwest New Mexico.

The Hermits Peak/Calf Canyon Fire has been ablaze since May 19. With nearly 3,000 personnel tasked to battle the flames, the containment has slowly climbed to 65% as of Thursday afternoon. The higher the containment number, the more control the firefighters have over the fire.

According to the National Interagency Fire Center, the cost to battle the fire since its inception (suppression only), this would place it among the costliest in US history, though the number does not include structures or insured losses which otherwise can create billion-dollar disasters in more populated areas of California.
About 250 miles to the southwest, the Black Fire in the Gila National Forest is only 44% contained as of Thursday.

The arid conditions have created a tinderbox across the region. Albuquerque has not seen measurable rainfall since March 30, while only managing .85″ of rainfall, which is only 39% of normal, so far this year.

The two massive wildfires across New Mexico have cumulatively consumed an area nearly the size of the state of Rhode Island.

This year’s wildfire activity hasn’t been confined to only New Mexico. There are currently 16 large fires burning across four states, including Arizona, Colorado and Alaska. In 2022, there have been more than 28,000 wildfires consuming more than two million acres to date. This is the second most year-to-date acres burned over the past decade, according to the National Interagency Fire Center.

With so much land scorched across the West, even the potential for rainfall has created its own hazards. On Wednesday, with thunderstorms forecast for parts of northern New Mexico, the National Weather Service in Albuquerque issued a flood alert with an interesting warning. The agency cautioned “just a quick .25” inches of rainfall can create flash flooding over a burn scar.”

“After a wildfire impacts an area, the soil becomes water-repellent, and any rainfall can quickly turn to runoff, along with debris flows of soot, ash and timber,” the National Weather Service in Albuquerque said in its forecast discussion. Thunderstorms and flash floods in burn scar areas are the main concern Thursday before drier weather persists into the weekend.
But with the drier weather comes the potential for record heat. In fact, more than two dozen cities in the southwestern US could exceed daily record values this weekend.

The extreme heat makes it more difficult on the firefighters trying to battle the fires and increase the containment numbers.