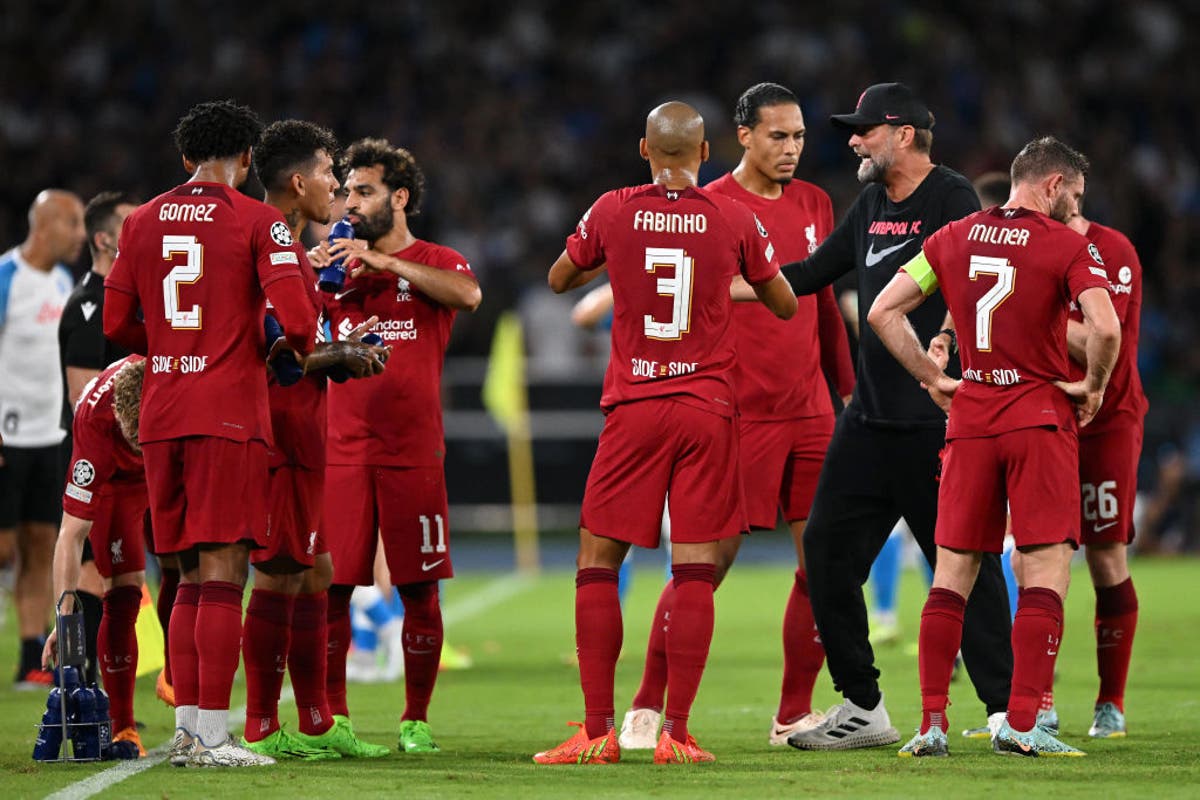 Midfield control. Lightning counter strikes. Trickery in the box, high and relentless pressure on the ball, an inside forward who can challenge, create and shoot in equal measure. An iconic stadium in full voice and new signings bedding in seamlessly. If it all sounds familiar to those of a red persuasion on Merseyside, it was much more a reminder of what was, rather than what they’ve been witnessing this season.

This was another memorable European night involving Liverpool – but not of the kind the club-made montages will be showing too often, as Napoli swept aside their Premier League opponents with a resounding and deserved 4-1 win.

Supporters of the Anfield club have, this season, been torn somewhere between amusement and irritation that in the weeks following assistant manager Pepijn Lijnders releasing a book entitled Intensity, that precise team-defining element has been entirely missing from the actual on-pitch performances.

Against Everton at the weekend, such a lack of tempo and energy about their play against opposition without a win and with an inferiority complex ultimately resulted in a goalless draw being the outcome of the derby.

In the Stadio Diego Armando Maradona, against a team flying domestically and full of belief after a crucial weekend win of their own, Liverpool were utterly swept aside.

This result has been coming, is the thing, and the real question marks now are over why more significant changes were not made to the line-up – be they tactical or personnel – and, maybe more pertinently, how the team recovers to produce more of what should be on show.

Handily, it will not be difficult to find video evidence to show the players and staff of what Liverpool are supposed to be doing, at least if the plan is to continue with what has taken them so high, so far: simply replay the first half of this defeat.

Victor Osimhen was a menace, hounding the defence with intelligence as much as physicality, and then having the technique – penalty aside – to cause all sorts of issues. Andre-Frank Zambo Anguissa was relentless on and off the ball and the home players hunted in packs to regain the ball and then do plenty with it.

At the other end of the pitch, Roberto Firmino tried to do a similar job but he was too often a single soul chasing shadows. Unity and telepathy were the attacking watchwords of Liverpool’s attack previously; there’s nothing of the sort there this season, on or off the ball.

And no, this is not simply because Sadio Mane has departed.

Where Khvicha Kvaratskhelia was lively, direct and as confident as he has been in Serie A all season, Luis Diaz was subdued and sloppy in the first half. He, at least, got the message from what must have been a half-time rocket in the dressing room, but only after the Reds went a fourth behind.

It was far from just the attacking play, press and pace, however.

How many times did Stanislav Lobotka spin away from pressure in midfield, into space and free to play the next ball to start a dangerous move? There was no equivalent in red. How solid and together were the centre-back pairing – a new one, remember – of Amir Rrahmani and Kim Min-jae? Liverpool’s centre-backs by contrast gifted a penalty and a tap-in between them, even without considering the rest of the first half when they were scythed through repeatedly.

Without Virgil van Dijk’s clearance off the line and Alisson’s penalty save, a more realistic 5-0 scoreline would have been on the board at the interval.

Liverpool could have had zero complaints had that been the case.

There’s an awfully long road ahead for the team to get back the kind of fear and aura about them which defined it heading into matches only half a season ago, and that’s just on a one-off basis – it takes a lot longer to rediscover consistency.

This hammering must serve as a wake-up call for Liverpool: of the performance level which is required if trophies are still the objective, of the performance style their rivals are going to bring against them more and more often – and of the performance type which they themselves were renowned for and have been utterly missing this season.