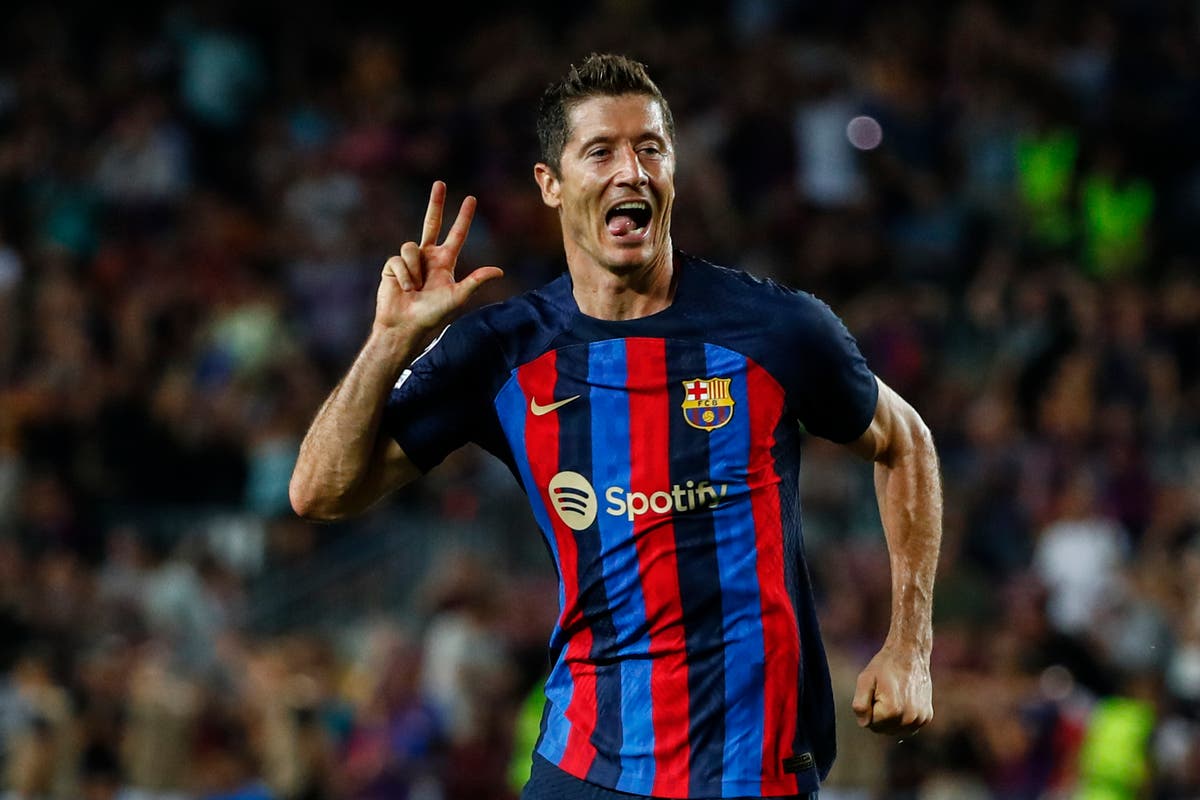 Robert Lewandowski scored a hat-trick as Barcelona opened their Champions League campaign with a comfortable 5-1 win over Viktoria Plzen at the Nou Camp.

Franck Kessie headed the LaLiga side in front after 13 minutes, before Plzen thought they had been awarded a penalty for a foul by Andreas Christensen on winger John Mosquera but the decision was overturned following a VAR review.

Lewandowski slotted in a second on 34 minutes, his sixth Barcelona goal since a summer move from Bayern Munich.

Jan Sykora had the travelling Czech support celebrating when he headed past Marc-Andre ter Stegen, with VAR ruling the goal onside.

Lewandowski, though, further extended Barca’s lead when he nodded in a cross from Ousmane Dembele during first-half stoppage time.

The Poland striker completed his treble in the 67th minute when he fired home a volley from the edge of the Plzen penalty area, taking his personal tally to 89 Champions League goals, with substitute Ferran Torres adding a fifth.

In the other Group C game, Bayern won 2-0 at Inter Milan with an early strike from Leroy Sane and a second-half own goal from defender Danilo D’Ambrosio.

Napoli laid down a marker in Group A with an impressive 4-1 home win over Liverpool.

Piotr Zielinski gave the Partenopei an early lead from the penalty spot after handball by James Milner.

Napoli then had another chance to extend their advantage from the spot following a VAR review for a foul by Virgil Van Dijk, but Victor Osimhen saw his penalty saved.

Andre Zambo Anguissa did double the lead in the 31st minute and substitute Giovanni Simeone then tapped home a third goal just before half-time.

It got worse for the Reds soon after the restart when Zielinski knocked in a fourth after his initial effort had been saved, with Luis Diaz swiftly scoring a consolation goal for the shellshocked Premier League side.

Rangers’ first game back in the Champions League group stage after a 12-year absence ended with a 4-0 defeat at Ajax – where the Scottish side were 3-0 down inside 33 minutes.

Tottenham opened their Group D campaign with a 2-0 home win over Marseille, who played most of the second half with 10 men.

Marseille defender Chancel Mbemba was shown a straight red card in the 47th minute after bringing down Heung-Min Son outside the penalty area.

Spurs’ pressure finally told with 14 minutes left when Richarlison nodded in a cross from Ivan Perisic to score his first goal for the north London club.

The Brazilian, signed from Everton, then doubled his tally with another close-range header late on.

In Group B, there was late drama at the Metropolitano Stadium as Antoine Griezmann came off the bench to score deep into stoppage time as Atletico Madrid beat Porto 2-1.

There was a lengthy delay during the second half as Porto midfielder Otavio was carried off on a stretcher after a collision.

Porto were then reduced to 10 men with nine minutes left after forward Mehdi Taremi collected a second yellow card.

Atletico thought they had won it when Mario Hermoso’s shot was deflected in at the start of some 11 minutes of added time, only for Mateus Uribe to equalise from the penalty spot following a handball.

There was, though, late drama as Griezmann – again brought off the bench just after the hour amid reports the club did not want to trigger a clause to buy him on a permanent basis from Barca – nodded in from a corner to spark wild celebrations from the home support.

Club Brugge beat Bayer Leverkusen 1-0 at the Jan Breydel Stadium with a goal from defender Abakar Sylla late in the first half after keeper Lukas Hradecky fell with the ball over the line from a corner.

Last full day of Queen’s lying in state and a national...

Last full day of Queen’s lying in state and a national...