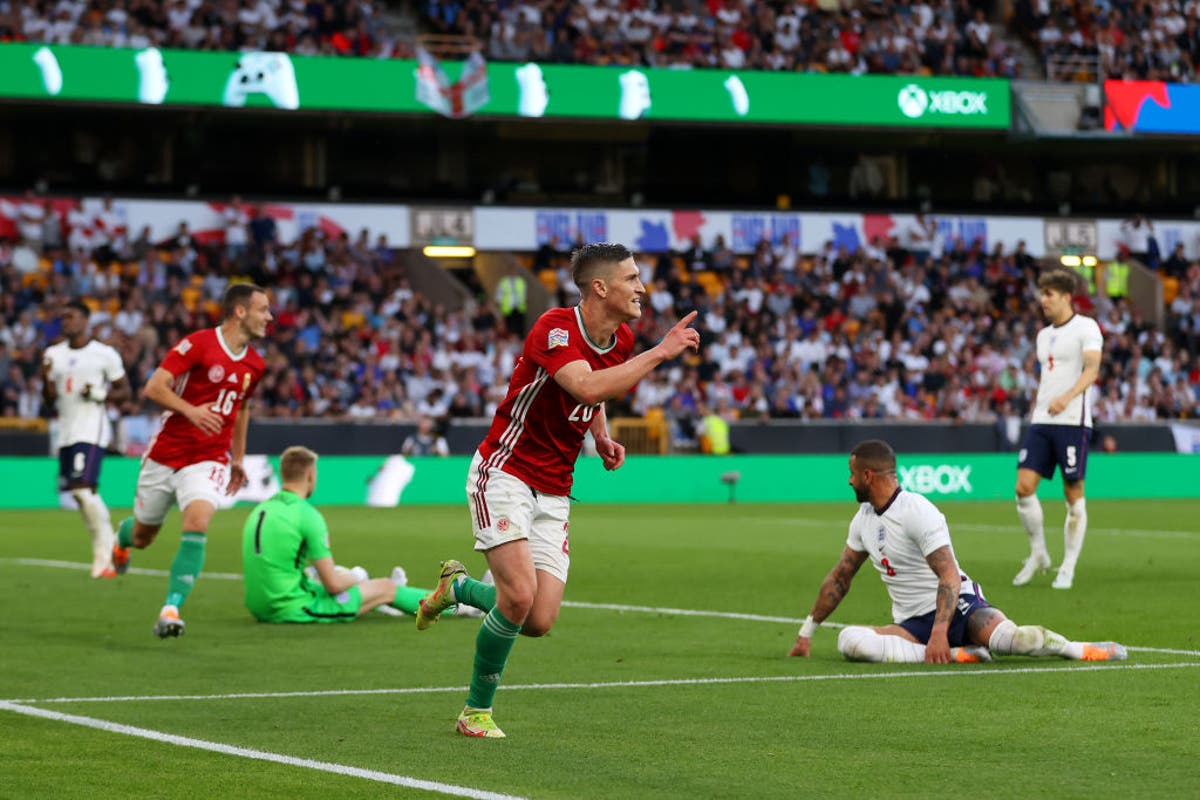 This can no longer be written off as meaningless. The Nations League has instead produced England’s worst-ever home defeat to a side from outside the old “home nations”, and worst in all since 1928, as Hungary symbolically surpassed their own famous 6-3 of 1953.

We might well see a similar inquest. This obviously can’t be dismissed as just the Nations League any more. There felt more to it than fatigue or circumstances.

Gareth Southgate has real problems to solve, as his team lost momentum and – perhaps most relevantly – he lost the support of a significant section of a home crowd. It is the first show of the sort of negativity that used to sour so many campaigns and managerial reigns of the past, and this went really toxic.

Southgate and his players were repeatedly booed, with that reaching a crescendo as Harry Maguire was brought on to shore up a defence that had lost John Stones to a red card.

It was that kind of night, where it was hard to settle on what the low point was. It just kept getting worse.

The boos for Maguire were down there, but they were quickly followed by “you don’t know what you’re doing”, “sacked in the morning” and a lot of direct personal abuse for Southgate himself.

Maybe worse than any of that was just the manner of the Hungarian goals, as they simply became more nonchalant and confident, this mid-tier team realising they had the easy beating of supposed World Cup favourites.

Zsolt Nagy simply powered in the third, before Daniel Gazdag so casually lifted in the fourth. Aaron Ramsdale was one of a few England players that just had bad performances, all combining for a collective display that was one of the worst nights the national side has endured in decades.

Less relevantly given everything else happening this year, but almost as symbolically, the side is now staring up to relegation from Nations League A.

This dismally long international break, that no one wanted, and has now brought the most unwanted of records. Two points, two defeats, one goal scored and that from a penalty, with seven conceded.

It is dismal, but even worse was the lack of life in the team that seemed borne from more than fatigue.

Take the defending for that set-piece that led to the first goal. The free-kick should not have been that hard to deal with, but the line was split into three different sections, which saw John Stones head the ball towards his own goal. Kane then missed it, leaving Roland Sallai free to smash the ball past Ramsdale.

It was quite the finish, but from quite the mess.

It could have been much worse much more quickly, as Domonik Szoboszlai whipped in an even more dangerous free-kick, that Reece James had to powerfully head off the line. This was what stood out about Hungary. They all had basic jobs and knew exactly what to do.

England were instead overplaying everything, to the increasing frustration of the crowd.

When Harry Kane seemed to suddenly create an open by dropping back to play a brilliantly insightful ball, James and Bukayo Saka just got in each other’s way.

Kane generally wasn’t going that deep, though. England’s main plan seemed to be one of the midfielders trying to pick passes for the wingers to run onto, but they didn’t come off once.

It meant the players went off to boos at half-time.

The same jeers soon sounded around the stadium as England tried to play. “Tried” being the operative word because they were struggling to match Hungary’s purpose, and were eventually further behind.

Adam Szalai, mocked by the fans as a “s**t” Andy Carroll, created space with some deft footwork at the edge of Aaron Ramsdale’s box.

Sallai was left to pick up the pass and poke the ball past the Arsenal goalkeeper.

Even for that second goal, long before Hungary had a humiliating third and fourth, most of their bench had ran onto the pitch to celebrate euphorically.

They were aware of the historic significance but there was more to it.

The home crowd had sung “you racist b*stards” during the Hungarian national anthem – before interspersing their own with “no surrender” – and there was an edge throughout the whole game, most of all in flashpoints between players. Some may now mock Hungary celebrating like they won the World Cup, except you only have to consider what this might mean for England’s.

They end a break that was supposed to be about honing and fine-tuning looking like a rabble, Stones sent off as other players got frustrated.

It’s not just the Nations League any more. It’s about so much more than that.