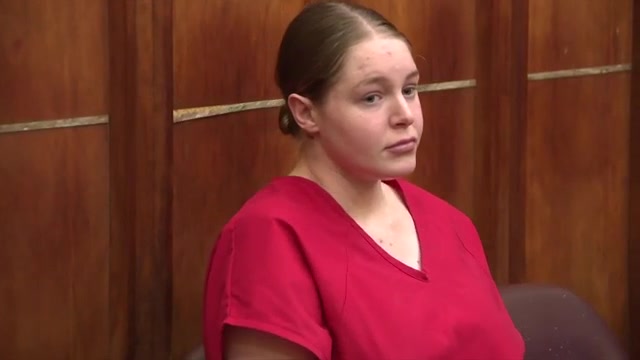 MIAMI (WSVN) – A social media model who confessed to fatally stabbing her boyfriend at their Miami high-rise broke down during her bond hearing as prosecutors played chilling 911 calls.

7News cameras on Tuesday captured Courtney Clenney in handcuffs and dressed in a red prison jumpsuit as she walked into a Miami-Dade courtroom.

She was seen mouthing “I love you” to her parents, who traveled to Miami from Texas.

Tuesday’s Arthur hearing aimed to determine whether the defendant will remain in jail or receive a bond while she awaits trial for the murder of Christian Obumseli.

Clenney was seen covering her face and crying as a 911 call she made on April 3 was played.

A City of Miami Police detective who responded to the scene of the stabbing also testified in court about the couple’s transgressions.

The detective was also asked about the documented fighting throughout the couple’s relationship.

“You do have some evidence, right, throughout the course of the investigation that, at minimum, Obumseli also hit Courtney at least once, that you’re aware of,” said Prieto.

“From what I was told, yeah,” the detective replied.

Prosecutors, meanwhile, laid out what led up to the stabbing death of Obumseli. They played several videos and audio recordings as part of their case against her.

Clenney was arrested on domestic battery charges in Las Vegas on July 27, 2021, after she allegedly threw a glass at Obumseli.

Prosecutors also showed a picture of Obumseli with stitches below his lower lip after he was allegedly slashed by Clenney in January.

On March 5, a cellphone recording by Obumseli captured Clenney saying, “I’m actually [expletive] not having a good day where I actually, literally, [expletive] want to kill you, but you don’t take me seriously.”

Nealy a month later, police said, Clenney shoved a knife three inches into Obumseli’s chest inside their unit at the upscale One Paraiso condominium.

Obumseli was taken to Jackson Memorial Hospital where he succumbed to his injuries.

Clenney has been in jail since her arrest in August.

During the bond hearing, her lawyers claimed she was acting in self-defense. Prieto showed pictures of bruises on her lower legs.

Clenney’s attorneys said their client had been abused and stalked by Obumseli leading up to the killing, but prosecutors said Clenney was the violent abuser, whose behavior moved to murder in April.

Tuesday’s hearing wrapped up without a bond decision reached. It is scheduled to resume at 1 p.m. on Thursday.

Copyright 2022 Sunbeam Television Corp. All rights reserved. This material may not be published, broadcast, rewritten or redistributed.

Join our Newsletter for the latest news right to your inbox