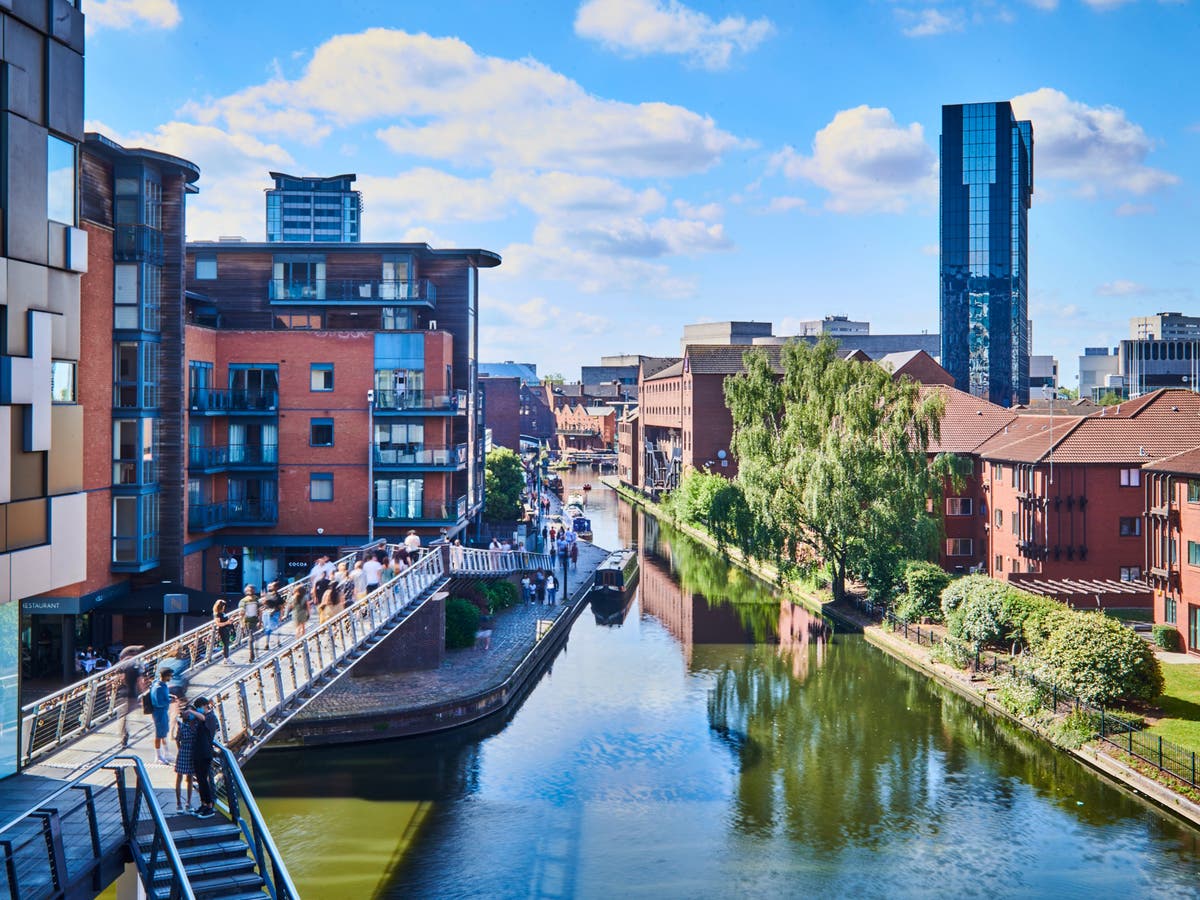 A monochrome cat peeps tentatively through a narrowboat’s cratch cover, eyeing my kayak with mistrust. Nearby a flock of Canada geese waddle nonchalantly along a slipway while skeins flit overhead.

Elsewhere down the canal, a cheerful vendor sells fudge from a boat galley and drinkers chat on sun-shrouded terraces. The serenity is fractured only by the fuzz of chatter emanating from grinning friends, groups of shouty teens and the odd hen and stag do crowd revelling in weekend jaunts.

In such surroundings, it’s hard to believe I’m in a city. And not just any city – this is Birmingham, the UK’s second city. And, as it turns out, the country’s City of Canals. Rather staggeringly, it boasts more kilometres of canals than both Venice and Amsterdam, but its historic waterways are somehow largely overlooked.

Hopefully that’s about to change. Amid last summer’s Covid restrictions, charity Roundhouse quietly tested out guided kayak tours along Birmingham’s city centre canals. Buoyed by their success, they’ve just launched them again for their first full season in the hope of changing people’s perceptions of these often-misrepresented titans, and giving visitors and residents alike a more sustainable way to enjoy the city.

“It’s heritage by stealth,” says Keith Wraight, Roundhouse’s programming and partnerships manager, who has helped launch the Bustling Birmingham Kayak Tours. “They’re fun to do but over two hours you learn a lot about Birmingham’s heritage and history without realising it. Because of Birmingham’s industrial heritage, there was always this image of the canals not being a nice place to be. But now people have turned around and embraced the canals and we want to show that off.”

The tours are part of the culmination of an eight-year project between the Canal & River Trust and the National Trust to renovate and repurpose the Roundhouse, a Grade II-listed circular brick building dating from 1874 and originally used as council stables and stores. Now housing a visitor centre with exhibitions plus offices, the newly refurbished block is also the launchpad for a range of sustainable city tours, both guided and self-guided, on foot and bike as well as water.

Roundhouse has trained up volunteers as British Canoeing Instructors to use as guides, who will give participants a taste of the 56km of canals that loop through the city centre (by comparison, Venice is said to have only 42km, Amsterdam 50km).

First stop on my kayak trip was Oozells Loop, a small basin once home to a plethora of factories, including a flour- and saw-mill and a timber yard. The recreational crowds used to steer clear, the thick, black blanket of coal dust smeared on walls, pungent air, waste from the horses that pulled the boats and industrial filth all warnings that these were purely working waters.

But nowadays the grand cast iron and stone bridges have been renovated, towpaths rebuilt and spruced-up warehouses converted into upmarket apartments and leisure complexes. One block of smart flats still bears the name of Baxter Paperworks, the first company to patent and manufacture the square-bottomed paper bags we still use today.

Nigel Sisman, one of our volunteer guides, told how work started on Birmingham’s first canal in 1768 under James Brindley, the notable engineer behind Manchester’s already ground-breaking canal building programme. More canals followed and business boomed; importing and exporting heavy goods like coal and iron became easier, quicker and cheaper and, as the dawn of the Industrial Revolution gripped the Midlands, the canals became the motorways of their day, the city’s jugular vein with gas lighting installed at every lock to enable 24-hour usage.

We paddled along to Gas Street Basin, where we saw an old ice breaker boat, notable for how the underside of its bow protrudes above the water. When canals froze – common back then – boats like these would be sent out, hauled by up to 20 horses and rocked to break up the ice.

Further down was the Mailbox, once the Royal Mail’s largest UK sorting office and now filled with waterside restaurants, hotels and designer brands. In its previous incarnation, craftsmen in the city’s renowned Jewellery Quarter would post their work there on a Friday and arrange to have it redelivered to them on a Monday morning because it was safer than leaving it in their workshops.

Nigel, who works in the gas industry, told me he joined Roundhouse’s ranks of volunteers to show people the real Birmingham. His colleague Helen Colson, who also accompanied us, uses it to reconnect with a more laid-back lifestyle; naturally a countryside soul, she had to move to the city for her job in IT and finds the peacefulness of the water therapeutic.

Judging by the clamour emerging from the canal-side terraces, the very symbols of Birmingham’s industrial past have done a pretty good job of reinventing themselves already.

The Bustling Birmingham Kayak Tour with Roundhouse Birmingham costs £30 per person or £25 for concessions, including children under 12 and students.

Direct trains run to Birmingham from London, Cardiff, Newcastle, Edinburgh, Leeds and others.

Make a weekend of it and spend a night or two in this vibrant city, which is hosting this summer’s Commonwealth Games.

For an eco-friendly stay try the Clayton Hotel. Under their Green Tourism commitment, no waste goes to landfill and most lights have been upgraded to LED. They’ve also reduced their carbon footprint, planted tree saplings and recycled old pallets to create a rooftop bee hotel and raised vegetable and herb gardens. Under their current Easter package, double rooms for two cost from £99 per night, B&B.

Alternatively, walk in the footsteps of Charlie Chaplin, the Rolling Stones and Tom Cruise and stay at the historic Grade II-listed Grand Hotel, which recently reopened after a £50m refurbishment. From £129, room only.

For a quirky post-kayak brunch, pop into The Pig and Tail in Birmingham’s Jewellery Quarter. Its ‘ethical-sustainable-respectful’ ethos ensures produce is sourced locally and only renewable energy is used. Diners are encouraged to share their eclectic plates and platters, like the Baharat-blackened monkfish with curried yogurt, or home-made double chocolate brownies, served with a variety of additions. You can also help yourself to a board game or try a local beer from Attic and Glasshouse breweries.