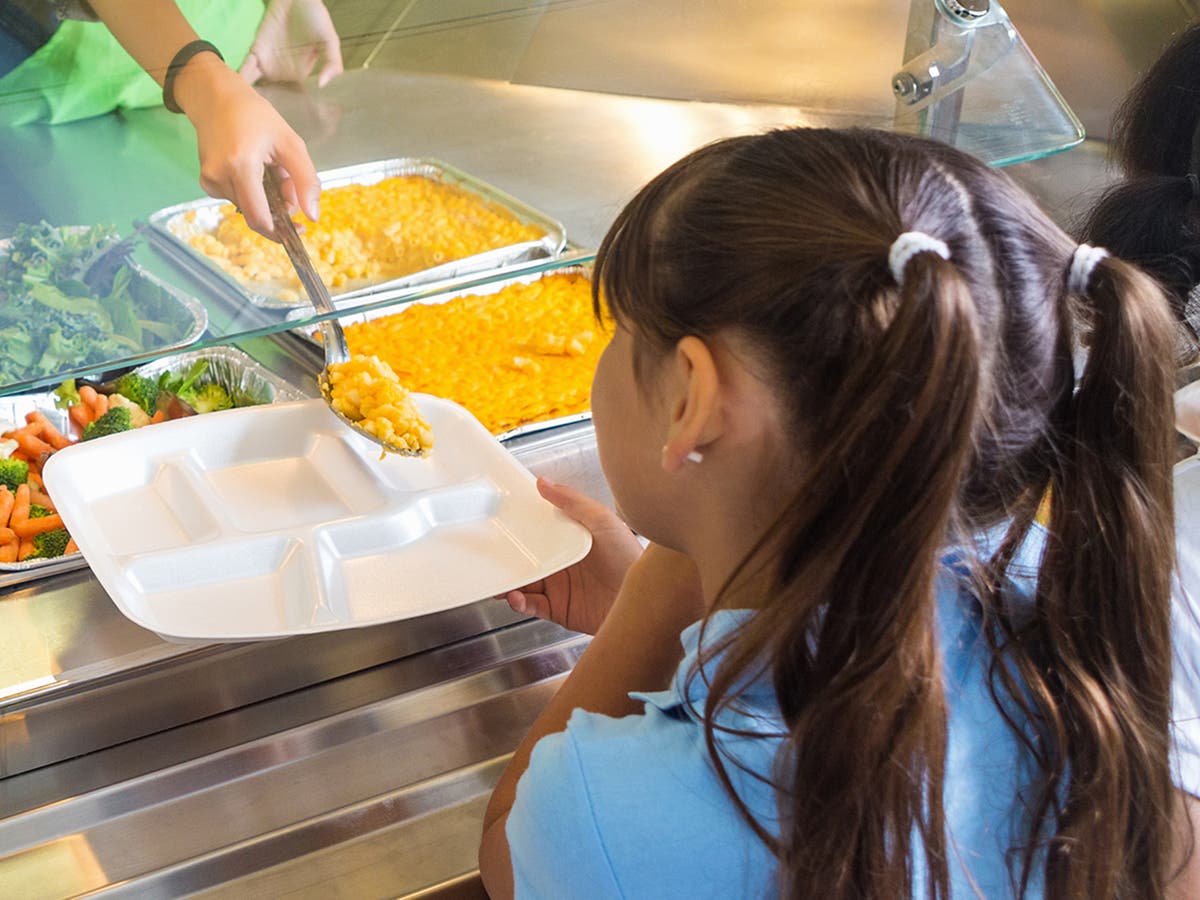 Ministers have been told they must raise the amount of money spent on children’s school meals amid claims that pupils are going home hungry because of shrinking portion sizes.

The Independent has heard from parents and headteachers who say children are being given less to eat as food costs soar.

One primary school headteacher said that his pupils were given just “four or five chips on their plate”, while a parent at another school said food was running out in the canteen.

Caterers have already been forced to replace some items with cheaper alternatives as they deal with rising costs, while schools struggle with a mismatch between free school meals funding and the prices set by caterers.

A government announcement earlier this week that the amount spent per meal for the youngest children would be increased by 7p was condemned as “indequate” against rising inflation.

Anne Longfield, the former children’s commissioner for England, said poorer children should not have to suffer because of the government’s “failure to plan”, and called on ministers to raise the amount spent on each meal.

Speaking to The Independent, she said: “Schools must receive the resources they need to meet the soaring demand for free school meals, so they don’t have to cut back on the quality or quantity of the food they provide.

“Children growing up in poverty should not be the victims of a failure to plan for the inevitable impact on school budgets of the cost of living crisis.

“The government should recognise how important free school meals are for struggling families, and increase eligibility and the amount that is paid for each meal.”

Ms Longfield, now the chair of the Commission on Young Lives, has previously backed a call for the expansion of free school meals.

The Independent has heard stories suggesting that this is already happening.

Peter McQuillen-Strong, a headteacher in Leeds, said he started noticing students having less on their plates at around Christmas. He raised concerns with kitchen staff about portions of chips being smaller a few months later.

“Children were getting four or five chips on a plate,” he said. “That is one mouthful.”

He later complained about smaller portions of sweetcorn, saying children needed a whole spoonful rather than a half.

Mr McQuillen-Strong said staff replied: “We are supposed to make this last longer.”

“The only thing they can sometimes scrimp and save on is often portion size. It is a little bit like Cadbury making their chocolate bars smaller.”

Tayyaba Siddiqui, from London, said her son – who qualifies for free school meals – had been told that food had almost run out in the school canteen by the time he was served.

“They are cutting down the quantity of food. By the time year 6 eats, there is much less food,” the 46-year-old told The Independent.

One mother, who wished to remain anonymous, said her two children had also been complaining about smaller portion sizes this year.

Headteachers and school caterers said they are grappling with funding pressures as they strive to make sure pupils get the food they need.

Simon Smith, a primary school headteacher in North Yorkshire, told The Independent: “We haven’t cut back on food, but we are having to supplement school meal costs from our budget to make sure that’s not the case.”

Matthew Knight, catering manager at Hillstone primary in Birmingham, told The Independent his school had been forced to economise by using cheaper products.

The school has cut out expensive meat like lamb entirely, and cut down on beef, while bulking out hot meals with lentils. Mr Knight’s team is also considering cutting down on the range of fruits being offered, substituting strawberries and melon with cheaper options like apples and oranges.

“We’re committed to providing a good meal, but we’re finding it very difficult,” said the caterer. “The money from government is not enough, and the price rises are unsustainable. We have to be innovative. I’m looking at cheaper alternatives.”

A headteacher from North Yorkshire, Matt Davies, said that schools are under pressure because of a mismatch between free school meals funding and current prices.

“The government pays a standard rate of £2.30 for a free school meal. However, our meal costs are currently £3.65, fixed for the next academic year,” he said. “School budgets have to pick up the difference, or the cost is picked up by raising the meal price for those paying for a school meal.”

LACA, the representative body for school food providers, said its members had warned they would be unable to comply with school food standards if funding did not increase.

Jacquie Blake, its chair, said the industry was “under real pressure and has been for a long time”, and that caterers were dealing with food price increases of an average of 20 per cent.

“A large majority of our members have had to change their menus as a result, with some having to reduce choice,” she said.

A spokesperson for Elior, a catering company that operates in schools, said putting on meals that meet nutritional standards had “become increasingly challenging with the recent increase in costs”, adding: “We have worked closely with our education clients and suppliers to adapt menus to help mitigate rising costs, and to ensure that the quality of our school meals is not compromised.”

Steve Hawkins, speaking on behalf of another school caterer, Sodexo UK & Ireland, said his company was also having to make changes to menus, switching out meat for plant-based proteins “to mitigate the rising cost of meat”.

Zoe McIntyre of charity The Food Foundation said it was “worrying” that caterers were “having to work innovatively” to cope with the rising cost of food. But Ms McIntyre said that expanding the eligibility of free school meals would not only help to ensure children are properly fed, but also support caterers in their purchasing options through “economies of scale”, whereby some products cost less when bought in greater quantities.

Earlier this week, ministers announced that the amount spent per meal for the youngest children would rise by 7p, from £2.34 to £2.41. But the 3 per cent increase has been branded “inadequate” as it falls below the level of inflation, and because it applies only to the free school meals supplied to children in key stage 1 in England.

Ministers made the announcement on the same day that they snubbed calls to rapidly expand the overall number of children receiving free school meals by almost a million.

Experts including former Conservative education secretary Justine Greening have urged ministers to ensure that more children from poorer backgrounds are able to access food this summer, after criticism that the current holiday scheme is not providing full coverage.

A government spokesperson said that the increase in free school meal funding for the youngest children would help schools to continue providing “free, healthy, nutritious lunches” to more than a million pupils in reception, year 1 and year 2.

“More widely, this government has expanded access to free school meals more than any other in recent decades, and is targeting over £37bn to help the most vulnerable,” they said.

“We continue to work across government to address rising costs, and will keep free school meals eligibility under review, to make sure these meals are supporting those who most need them.”