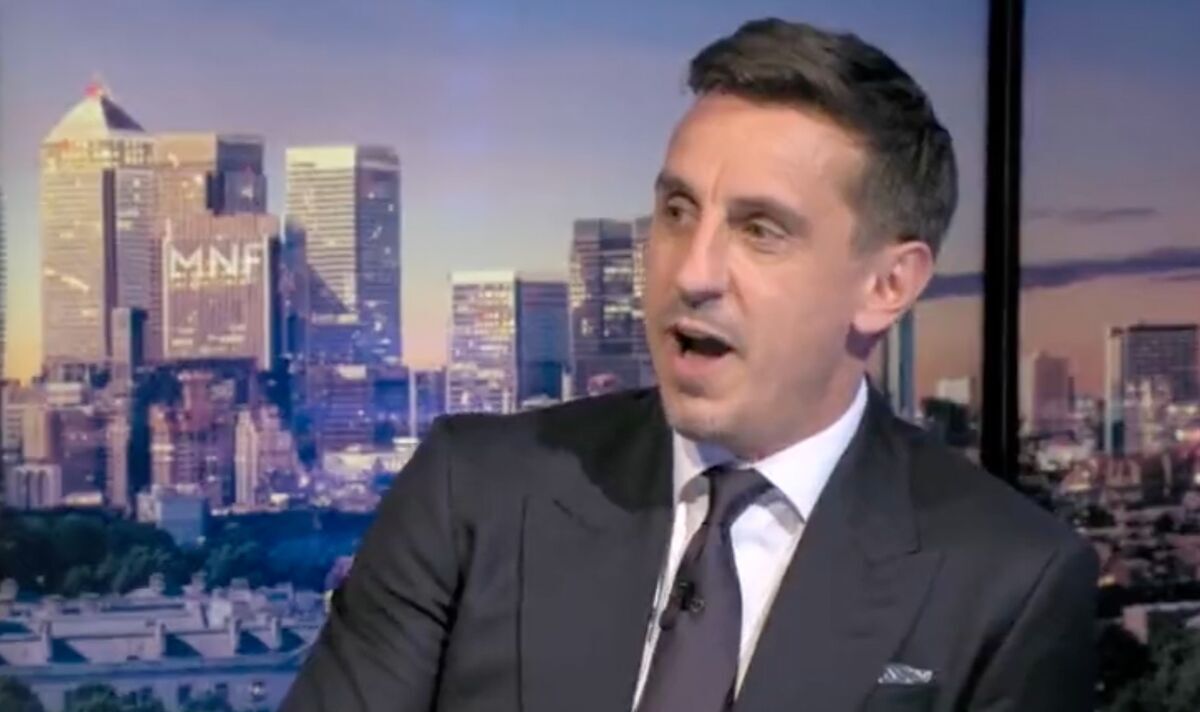 Gary Neville left the Sky Sports studio in stitches when he underlined his support for Manchester United boss Erik ten Hag ahead of Monday’s fixture between Liverpool and Crystal Palace. Ten Hag has endured a baptism of fire in his new role with the Red Devils after failing to pick up a single point in either of the club’s first two matches, with his position already being called into question despite only taking over at the end of last season.

The Dutchman’s start to life at United went from bad to worse on Saturday evening, with Brentford running riot to condemn Ten Hag and his players to a humiliating 4-0 defeat in west London. And Neville appears to have lost faith in Ten Hag already, admitting on Monday that United could well finish in the bottom half just weeks after claiming they’d make the top four. He subsequently drew laughs when minutes later he insisted he would rather have Ten Hag over Tottenham boss Antonio Conte for the top role at Old Trafford.

“I watched that second half yesterday [for Tottenham against Chelsea], I don’t think that’s a Manchester United manager,” explained Neville when quizzed on Conte’s suitability to manage the Red Devils.

“We had Jose [Mourinho] at the club and Jose did a brilliant job. You look back now, finishing second, winning trophies, but it didn’t work in the end and I just don’t think it would at Manchester United for Conte.

“But he’s a brilliant manager and I love him to bits, I’m glad he’s in our league but not the right fit for the club.” Neville then added: “Erik’s the man,” prompting laughter from Jamie Carragher and David Jones.

Meanwhile, it remains to be seen whether Ten Hag will be able to turn things around at United, who currently sit rock bottom of the Premier League table after two defeats from as many outings. The 52-year-old has been left frustrated in the transfer market in his attempts to sign new players this summer, with a number of potential deals having failed to materialise and the club’s long-running pursuit of Frenkie de Jong still yet to reach any sort of conclusion.

Ten Hag has made no secret of his desire to use the market to his advantage and will likely continue to push for as many arrivals as possible between now and next month’s all-important deadline. He reiterated his willingness to add some much-needed quality to his ranks over the coming weeks after Saturday’s defeat at Brentford, in which he became the first United manager since 1921 to lose both of his first two league matches in charge.

“We need new players and quality players,” the Red Devils boss told reporters. “We will do everything to convince them to join us.

“Only when we stick together we will overcome it. The manager is the main responsibility and I take that.”

Verbal abuse now so bad that my family miss away games