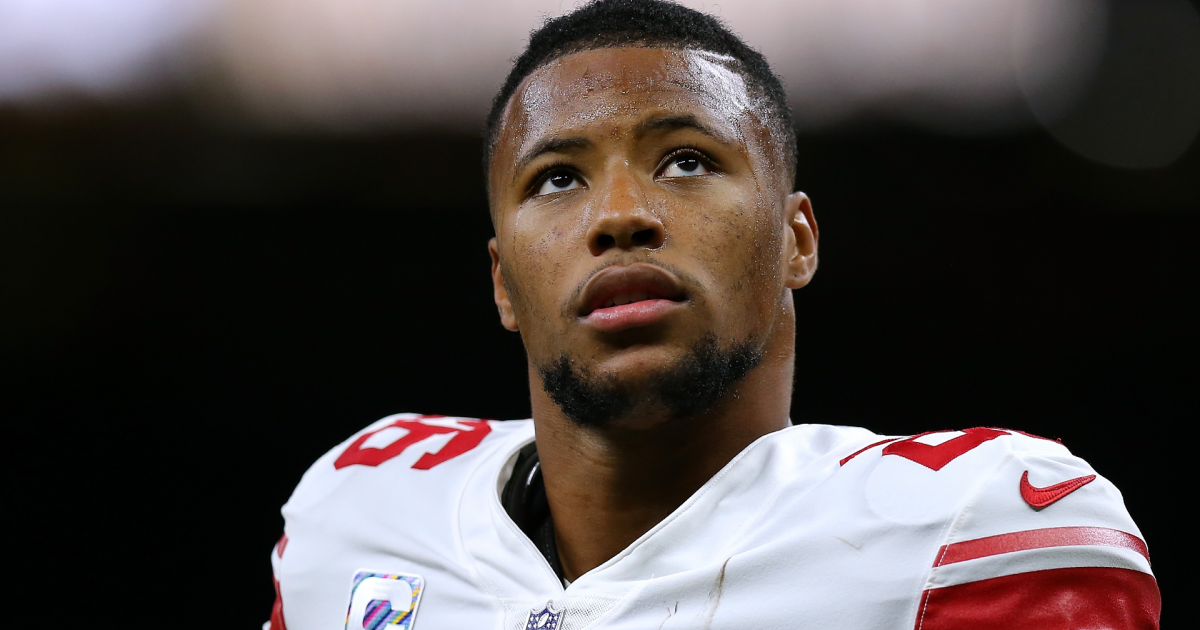 The New York Giants have been one of the most perennially disappointing teams in the NFL for five years running. In that span, running back Saquon Barkley’s Rookie of the Year win has been a lone bright spot, but after another promising 2019 campaign Barkley has been limited by injuries.

The Giants themselves, meanwhile, are 22-59 over the span, and they’re about to begin a new season with Brian Daboll as a first-time head coach and Daniel Jones in a make or break season. Barkley, who dealt with an ankle injury and COVID last year, will undoubtedly hope to be a focal point for the Giants offense.

He isn’t, however, being treated like the focal point of much of anything. Barkley’s stock has plummeted as a preseason fantasy pick, and the Giants are viewed as rebuilders before contenders.

Could the lack of hype help Barkley as he works toward resecuring his status as a premium back? He certainly thinks so.

We sat down with @saquon for the first episode of @2ndwindpodcast1 spoke about his 2nd wind after tearing his ACL, his motivation and his mindset for this upcoming season.

Tune in FRIDAY for the full episode pic.twitter.com/SU4QeDe6hh

In an upcoming appearance on the “2nd Wind Podcast,” which is set to release on Friday, Barkley was impassioned in talking about his prospects for next season.

Barkley also talk about his injuries over the past few seasons, and how they’ve changed his mentality heading into this year.

Last year more like ‘dang, the game was taken away from me. I never had a season when I didn’t go and play football. Now it’s kill mindset. Now it’s like ‘you know what, f— everybody.’ I’m ready to go crazy. And I’m ready to let the world feel me.

How much that comment resonates with people will ultimately depend on how much they care about preseason platitudes, but the potential is undoubtedly there for Barkley. If he can return to his 2018 and 2019 form, he’s perfectly capable of having a big season.

The Sporting News isn’t overly optimistic on Barkley’s potential to return to form.

In a new offense with a quarterback looking more or less to keep his job, he’s in Tier 4 among running backs — solid players who can serve as RB1 if you miss out on real premium choices.

At his best, Barkley can be a Tier 2 guy. Someone you can reliably pick in the first round and expect Round 1 productions. But he hasn’t been at that level, so he’ll have to earn it back. That will be hard on a team that is hardly brimming with talent to take the focus off him.

Barkley had over 200 carries in each of his first two seasons. We’ll see if Daboll tries to completely build around him and tries to force-feed Barkley the ball to replicate that production.

How will the Giants use Barkley in 2022?

The Giants don’t seem shy to use Barkley in that capacity mind you. In fact, he’s being looked at as a focal point this year.

“Barkley should be more involved in the passing game this season, and there isn’t much depth behind him,” ESPN’s Jordan Ranaan reported on Barkley in training camp. “So his workload will be huge … as long as he’s healthy. That’s the question: Can you trust him to stay healthy?”

And there’s the rub.

Although Barkley played 13 games last year, he was often hobbled after rolling his ankle on the Cowboys’ Jourdan Lewis just a month into the 2021 campaign. When it comes to running backs, being on the field is most of the battle.

MORE: Why Baker Mayfield got Panthers QB job, and what it means for Sam Darnold

Barkley’s injury history dates back to Penn State, when he missed two games as a freshman with an ankle injury.

In the NFL, he was injured before took a snap with a hamstring sprain, but he was ready in time for Week 1.

The first time Barkley missed games was in 2019, after he sprained his ankle against the Buccaneers. He would miss three games. He then played two games in all of 2020, tearing his ACL against the Bears in Week 2. Last season, Barkley missed four games with the aforementioned ankle injury he suffered against the Cowboys.

He’ll hope to not pad that already-lengthy history in 2022. Barkley himself sounds optimistic. But when it comes to training camp chatter, everything must be taken with a grain of salt.