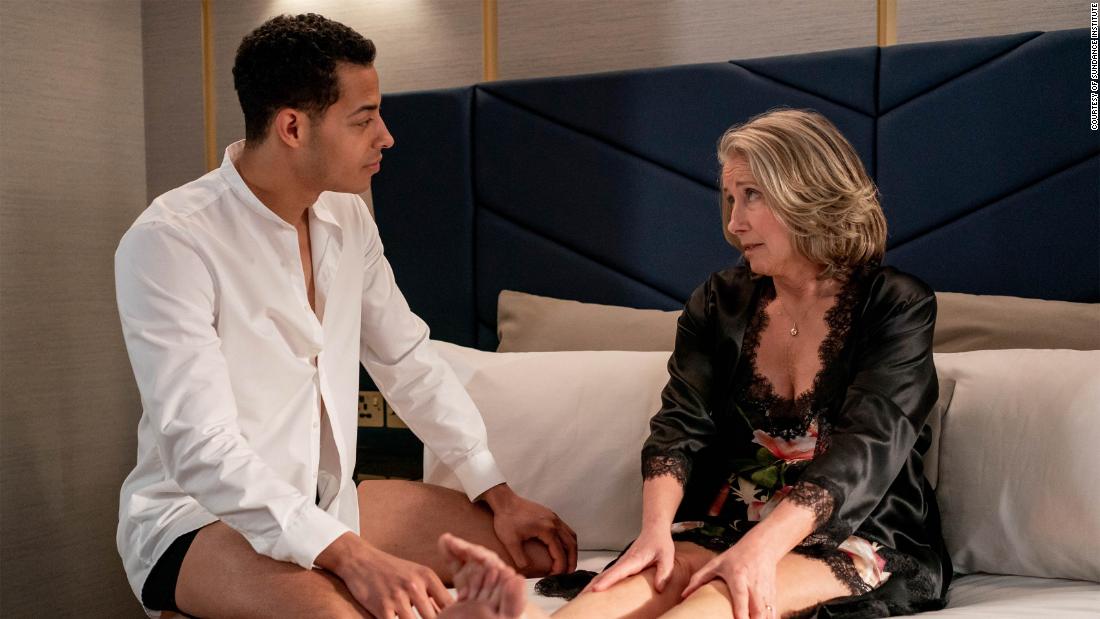 Thompson’s Nancy (not her real name) is introduced during her first meeting with a sex worker played by Daryl McCormack, Leo Grande (not his real name either), as she apprehensively and clearly ambivalently seeks to avail herself of his services. While he calmly seeks to reassure her, her biography gradually spills out, including the death of her husband two years earlier, and her unsatisfying sex life with him throughout their lives.

A teacher by training, Nancy approaches the whole exercise with an almost clinical sense of curiosity that can be very, very funny, well aware of the absurdities of this arrangement, and ready to back out at a moment’s notice. She peppers Leo with questions about how it all works logistically, while pushing for personal details that he only grudgingly provides.

Written by Katy Brand and directed by Sophie Hyde, “Leo Grande” overcomes the claustrophobia of the premise and framing through the sheer quality of the performances, including McCormack, an Irish actor perhaps best known stateside for “Peaky Blinders.”

Still, Thompson provides the film’s emotional core, playing a woman in her mid-50s who says, “I want to play at feeling young again,” speaks openly about never having experienced an orgasm and expresses concern early on that by doing this she’s “just a seedy old pervert.”

“Leo Grande” could easily be jokey or overly sentimental, but the movie largely avoids those pitfalls. And those who dwell on the “body positivity” element, which is certainly a marketing hook, shouldn’t miss the underlying themes not only about accepting who you are but lamenting missed opportunities and roads not taken, which resonate in a very universal manner.

Having played at the Sundance Film Festival, the small scale of the project makes its arrival via Hulu understandable (it’s produced through a sister Disney entity, Searchlight Pictures), but one hopes Thompson’s work here isn’t overlooked or forgotten because of the understated nature of the material and the venue.

So good luck to you, indeed, “Leo Grande,” as well as to Nancy and Leo (again, not their real names).

“Good Luck to You, Leo Grande” premieres June 17 on Hulu.

‘The Terminal List’ review: Chris Pratt stars in a dead-end Amazon series as a different kind of avenger