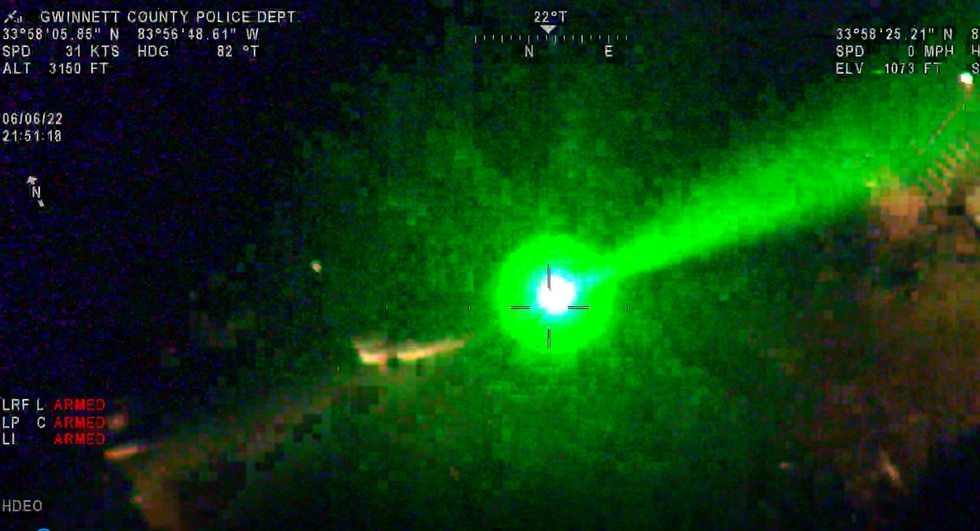 LAWRENCEVILLE, Ga. (CBS46) – This week, a 30-year-old Lawrenceville man was arrested after police said he shined a laser at their unit helicopter.

“When that laser comes in and hits these windshields and windscreens it just lights up the entire cockpit and you can’t see any of your gauges, any of the navigation systems, and the pilot could essentially lose control,” said Officer Marcus Lapitsky of the Gwinnett County Police Department.

Video released to CBS46 News shows within 10 minutes of the green light reaching the cock pit of a Gwinnett County police helicopter, crews arrived on scene at the man’s house and arrested him.

Little did he know – @GwinnettPd had tracking technology on board. They had his address in seconds. He was arrested within 10 minutes.

Story on @CBS46 at 11pm. pic.twitter.com/XwGllcmaJO

“People who shine lasers at aircraft face FAA fines of up to $11,000 per violation and up to $30,800 for multiple laser incidents,” said a spokesperson for the FAA, in an email to CBS46 News.

Local officials said they passed this case to the federal authorities where the man could now face local and federal charges.

“If you’re continually striking us with a laser, there’s a high probability that we’re going to find where it’s coming from,” said Officer Lapitsky, who was on board the helicopter on Monday.

Lapitsky said they have advanced technology on board that allows them to track a suspect to their address.

In the video, you can hear air crews relay to ground crews the address of the suspected laser pointer.

Local pilots in Gwinnett stressed they, too, are aware of the increase in laser strikes.

“Once we blank out, once we lose the controls. It can definitely be dangerous for us,” said Yuan Cao, a helicopter pilot and instructor in Gwinnett County.

“So if we can find those people it will definitely help us to fly safer,” she added.

Through April 2022, there have been 112 reported laser strikes.

“When you’re coming in for landing, it’s a high workload environment and that’s a critical time of flight so that technology is very useful as far as laser incidents with pilots,” said Brian Burton, a local flight instructor.

A spokesperson for the FAA said many types of high-powered lasers can incapacitate pilots.

Pilots have reported 244 injuries since the FAA began recording data on laser strikes in 2010, according to a spokesperson.

For Officer Lapitsky, the lasers are not just a safety concern for them – it could delay their ability to assist in responding to emergencies as a supporting unit of the police department.

“Not only are you putting pilots at risk for either a long term eye damage – but you’re also impeding someone getting help or care when needed for an emergency,” said Officer Lapitsky.

Biden ‘shocked’ by Highland Park shooting: ‘There is much more work to do’