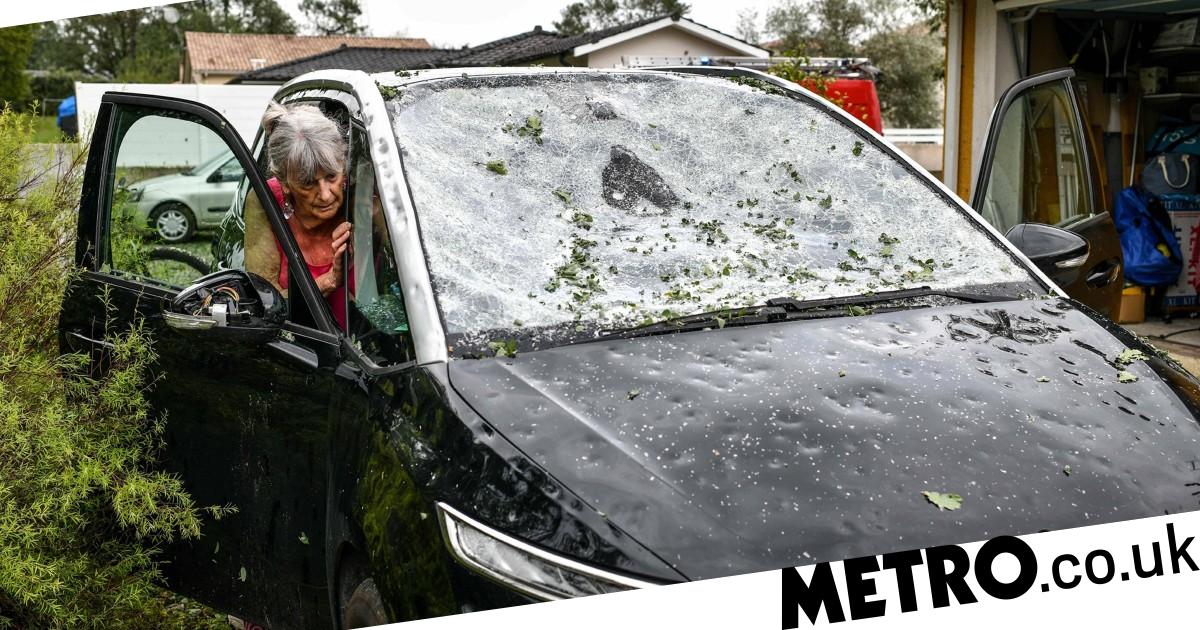 France has been battered by hail ‘bigger than golf balls’ which has damaged roofs, flattened crops and left cars looking like they’ve been through a gun battle.

The violent weather has swept across central and southwestern France over the past couple of days wreaking havoc and causing millions of euros worth of damage.

Yesterday evening a hailstorm hit the north of La Gironde, La Charente, La Charente-Maritime, and La Dordogne as well as a part of Bearn, leaving thousands of homes without power.

In Digoin, on the Loire River in the central Saône-et-Loire a school gym roof exploded as tiles were smashed by hail stones.

‘We have just had a storm of unprecedented violence with hailstones of a size that has never been seen in the memory of the inhabitants,’ he told The Times.

The weather has also laid waste to thousands of hectares of vines in the famous wine-growing region of Bordeaux.

While Nelly Lacave, a wine grower and farmer, said she had lost her entire crop.

‘Everything was shredded by the storm, the violent wind and the torrents of rain,’ she said.

‘The frost had already killed half the vines in April … this time we have nothing left.’

The recent extreme weather is not the first time farmers and wine producers have lost crops and many say they can no longer afford to pay the soaring premiums being demanded by insurance companies.

In response to the damage caused by the storms, the French government has promised aid to farmers and wine producers.

To release emergency state funds, the government has declared natural disasters in the Massif Central highlands, the Paris region and the southwest after the storms earlier this month that killed one person and seriously injured 15.

‘After that, we have to ask what can be done to try to protect against these disasters.

‘Farmers don’t want to have to ask every year if they are covered by insurance or not.’