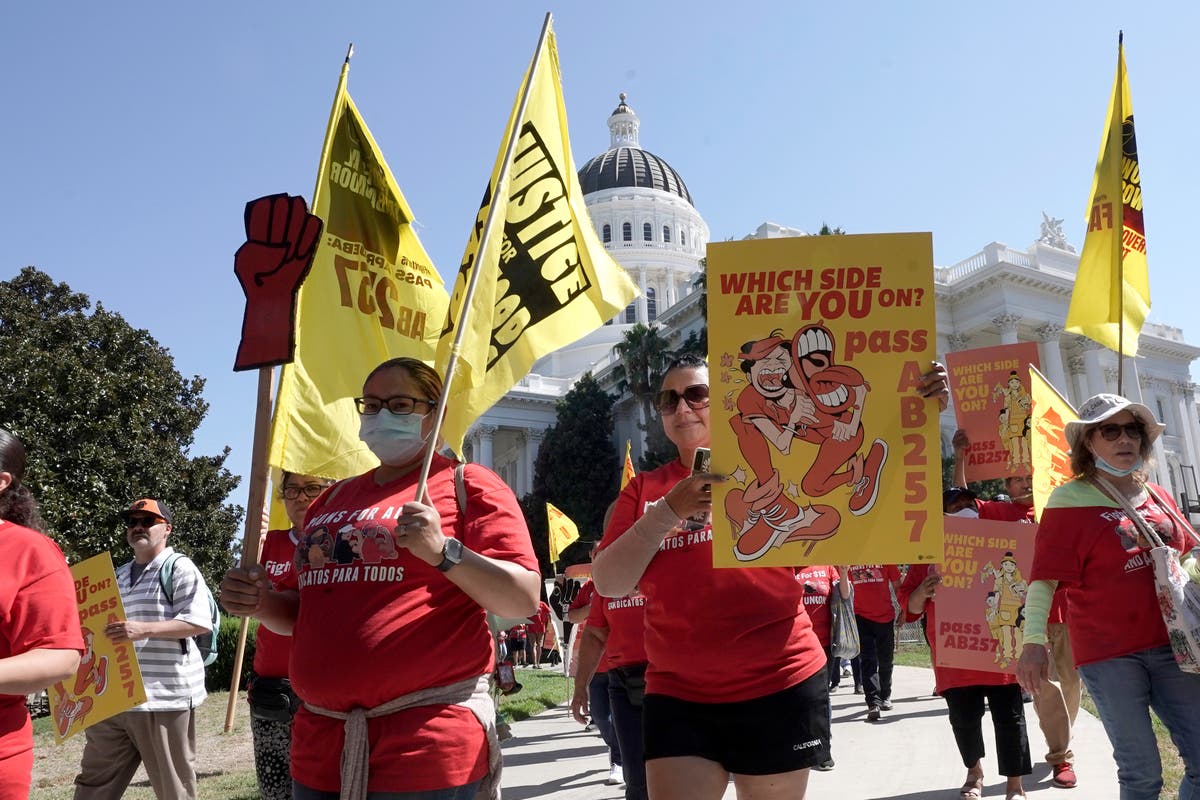 California Governor Gavin Newsom has signed a bill into law that will set a fast food industry-standard hourly wage up to $22 and create a 10-person council to advocate for better wages and working conditions, a measure that labour leaders expect to replicate across the US.

The governor signed the Fast Food Accountability and Standards Recovery Act on Labor Day on 5 September, promising “hardworking fast-food workers a stronger voice and seat at the table to set fair wages and critical health and safety standards across the industry,” he said in a statement.

The law will cap minimum wage increases for the state’s roughly 550,000 fast food workers at chains that have more than 100 locations at $22 an hour starting in 2023, followed by cost of living increases. The current statewide minimum hourly wage is $15.50.

A 10-person council – made up of business leaders, government officials and worker delegates – would work to establish standard wages and working hours and conditions.

Passage of the Fast Food Accountability and Standards Recovery Act could have a resounding impact among American fast food restaurants and workers outside California, a state with the largest economy in the US and fifth-largest in the world, and where America’s fast food industry exploded into an institution.

“That didn’t happen by chance. We’ve long had a formula around growth and inclusion. So many states forget the latter part of that formula,” Governor Newsom said in a video statement on Monday. “At the same time we recognise there are sectors of our economy where we’re falling a bit short, and one of those areas is fast food workers.”

The governor’s signature marks a decade of organising, political pressure and strikes among workers and labour advocates in a state with more than 550,000 fast food workers at more than 30,000 locations, among the fastest-growing and largest lower-wage workforces in the country.

California’s fast food workforce also is made up of nearly 80 per cent workers of colour, including more than 60 per cent Latino workers. Roughly two-thirds of workers are women.

Evelyn Barilla, a McDonald’s worker in Los Angeles, hailed the law as a milestone for fast food workers who will now have “an actual voice” in the industry.

She said the council will be able to address and combat sexual abuse on the job, wage theft and homelessness among workers while ensuring wages keep pace with rising costs of living.

“It’s going to make a big, drastic change,” she said during a briefing on Monday.

Mary Kay Henry, president of the Service Workers International Union, which has helped spark a nationwide Fight for $15 campaign among fast food and service workers across the US, said in a statement that the California law is the “most significant advance in workers’ fight for fairness on the job in a generation.”

Anneisha Williams, a Los Angeles fast food worker and organiser in the Fight for $15 movement, said the legislation serves as a “model for workers across the country who desperately need a seat at the table.”

A campaign to stop the bill’s passage said Governor Newsom “has not leveled the playing field but instead targeted one slice of California’s small businesses and consumers who rely on counter service restaurants to feed their families.”

Harris Liu, who operates a McDonald’s franchise in Sacramento, said in a statement with the campaign that the governor is “creating an unequal playing field that threatens small business owners and communities across the state.”

“It was a battle of Goliath versus David,” Jack in the Box worker Ingrid Vilorio said during a briefing on Monday. “We know it’s not over … We’re going to keep working so that these half million workers have a voice.”

Road blocked by police as car and cyclist crash

Strictly Come Dancing 2022: Full list of pairings and professionals without...

Roger Federer fights back tears as he plays final match of...

Strictly Come Dancing 2022: Full list of pairings and professionals without...