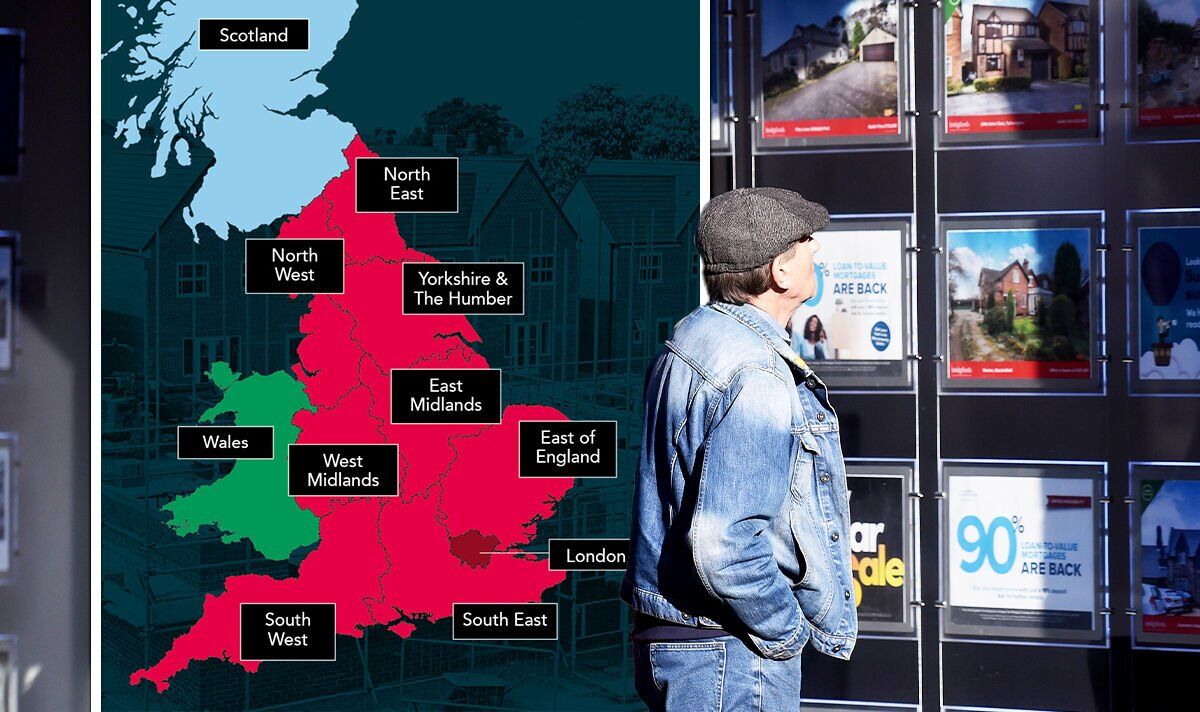 Homeowners in the capital cut £23,400 off their asking prices in August, as interest rate rises finally take their toll on house prices, according to new research by Rightmove. But the dip has been nationwide, the real estate giant said, with other parts of England, as well as Scotland and Wales, impacted too. Find out what is happening in your area.

Meanwhile, nationally, the latest data revealed the average price of a property dropped to £365,173 this month – marking a 1.3 percent or £4,795 decline.

The area seeing the second fastest plunge in house prices is the South East of England, with figures falling by 1.7 percent to an average of £483,842.

Average asking prices for homes in the North East are falling just behind the South East, with a 1.4 percent decline between July and August.

The region of Yorkshire and the Humber is fifth on the list of fast-dropping house price areas.

The current average asking price of £241,489 signals a 0.9 percent dip since last month.

The East of England, where the average house price has fallen to £425,002, has seen a 0.8 percent decrease.

Closely behind is the South West of England, which has seen a fall in prices of 0.6 percent – the average asking price currently sitting at £389,064.

Rightmove said sellers who need to move quickly tend to decrease their asking prices in order to ensure they can close deals and move in by the end of the year.

Tim Bannister, a Rightmove director, said: “A drop in asking prices is to be expected this month as the market returns towards normal seasonal patterns after a frenzied two years, and many would-be home movers become distracted by the summer holidays.”

Growing interest rates — up in response to soaring inflation — are still weighing on the housing market, although not massively.

Mr Bannister said: “It’s likely that the impact of interest rate rises will gradually filter through during the rest of the year but right now the data shows that they are not having a significant impact on the number of people wanting to move.”

He added: “Demand has eased a degree and there is now more choice for buyers but the two remain at odds and the size of this imbalance will prevent major price falls this year.”

The Bank of England hit its largest interest rate rise for 27 years and the average monthly mortgage payment for a first-time buyer with a 10 percent deposit pushed past £1,000 for the first time.

The two grim milestones, which were both his earlier this month, are unavoidably hitting buyer affordability.