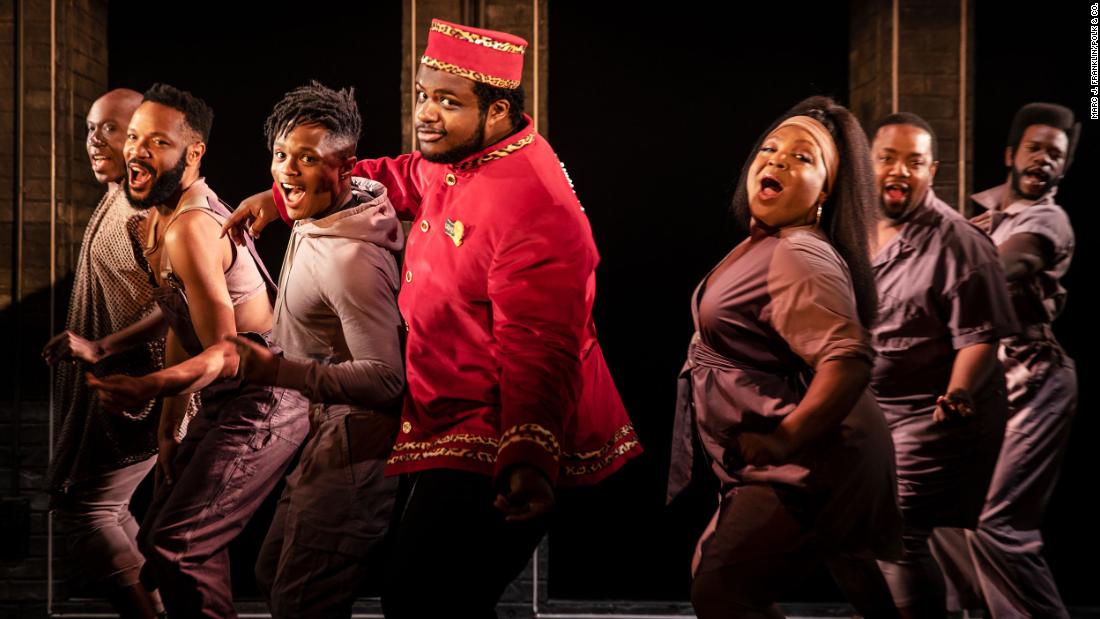 What’s more, the show is often graphic and deeply, painfully intimate: there are the barbed interactions with Usher’s parents, who attempt to dissuade him out of his long-established “homosexsh’ality,” and a sexual encounter during which Usher’s partner demeans him using racist language and roleplay.

CNN spoke with director Stephen Brackett, who’s been with the show for 10 years, since the early days of its development. He’s nominated for a Tony for best director. Jackson is nominated for best score and book. Its star, Jaquel Spivey, a recent college grad who made his Broadway debut with the show, is also nominated. (Many awards prognosticators expect the show to do extremely well on Sunday.)
During the years when the show was being workshopped and whittled into the eventual 100-minute revelation it is now, the “Strange Loop” team didn’t expect it to be a smash — if it even got produced. Now, it’s a Pulitzer Prize winner and Tony nominee for best musical. Here’s how “A Strange Loop” evolved from a complex kernel of an idea to the toast of Broadway.

The journey from Jackson’s brain to Broadway

It’s been a long and winding road, if not exactly a loop, for Jackson’s show. Versions of the musical had lived in Jackson’s brain since his 20s, and Brackett’s been attached as its director for the last decade. Through workshops and concert performances to its eventual off-Broadway debut, its Pulitzer Prize for drama win in 2020 and now its Broadway tenure, the “DNA of the piece has always remained the same,” Brackett said.
The show had always been written to follow Usher, but it took years to find the shape the musical would eventually take. Jackson and Brackett eventually settled on the musical’s uproarious “gospel play” segment as the culmination of Usher’s insecurities and fraught personal history coming to light. It offers a biting commentary of Tyler Perry’s works, which have been criticized for stereotypical depictions of Black women and gay Black characters (Perry is namechecked throughout the production).

Also playing in this minstrel performance are Usher’s Thoughts — there are six of them — who inhabit every other role in the production to flesh out Usher’s life. Though they’re all a part of Usher, they often feel at war with him — they partake in painful scenes in which his parents use homophobic slurs or in fictional manifestations of Usher’s deep insecurity.

There are other moments in “A Strange Loop” that will shock audiences, move them to tears or return them to a memory they’d forgotten. Most audiences have likely never seen a racially charged sex act onstage in a musical playing down the street from the exceedingly family-friendly hit “The Lion King.” But the provocation of the play serves a purpose, Brackett said, and it’s to tell an honest, original story that’s never made it to Broadway before.

“Every moment of outreach, we’re extending that out to the audience as much as possible so that people can see versions of their own life onstage,” Brackett said.

The show is influenced by bell hooks and Sondheim, among many others

“A Strange Loop’s” influences range from the indie anthems of Liz Phair, late writer and Black feminist bell hooks and the scholar Douglas Hofstadter, who wrote a book on “strange loops” of self-perception. For good measure, there are digs at Broadway stalwarts “Hamilton,” “The Lion King” and “Wicked,” too.
Though its subject matter is unique, Brackett said that he views many of the numbers as homages to classic musical theater. Usher doesn’t possess the manufactured confidence of a Harold Hill, nor is his suffering as grandiose as that of the famed Phantom. And though critics are quick to call the show “avant garde” because of its concept, Brackett said, it often looks and sounds like a traditional musical (minus the lyrics about gay sex).

“One of the things that Michael and I both share is a great love of the tradition of musical storytelling,” Brackett said. “When I think of this piece, I think of a very classic hero’s journey. There’s something almost Greek about it to me.”

Brackett said he sees in the show flashes of Stephen Sondheim’s “Company,” an episodic musical with a sizable ensemble traditionally anchored by one compelling, lonely male performance, and the works of William Finn, who composed the witty, winsome “The 25th Annual Putnam County Spelling Bee” and “Falsettos,” among others. (Unlike those shows, though, all the performers in “A Strange Loop” are Black. Brackett said that choreographor Raja Feather Kelly made sure the movement of the show “explodes with Blackness and queerness” at every turn.) The aforementioned shows are staged similarly, too, with small casts and wordy songs that reveal a character’s interiority to open-hearted audiences.

In “A Strange Loop,” Usher’s late-show solo number is “Memory Song.” In it, he recounts sneaking cupcakes in the high school gym and watching “The Young and the Restless,” the “one lone Black gay boy [he] knew who chose to turn his back on the Lord.” A meditation on his youth and the man he’s becoming, it’s a much quieter song than Act II barn-burners like “Rose’s Turn.” But this 11 o’clock number provides its protagonist with the same note of clarity on which to end the show.

“I’m so excited for those moments onstage that are the simplest and where the audience feels a real connection to Usher, and what he’s thinking and what he’s feeling,” Brackett said.

How a personal story resonates with audiences

There’s something in Usher’s story that will ring true to every audience member, Brackett said, even though his story is highly specific.

“Everyone knows what it feels like to be misunderstood, to feel trapped, to be working against something that they feel is against them,” he said.

That specificity is purposeful, Brackett said — Usher, dressed in a green plaid flannel and bell hooks tee, sharing sharp memories of a family spat or a painful sexual experience, comes to life through these details.

“The moment you start to generalize, the moment it starts to feel a little inauthentic,” he said. “We go to the theater to see humanity onstage — life reflected.”

Brackett said he hears from audience members after every show who connect with an element of Usher’s story, whether it’s his complex relationship with his family, his overwhelming self-loathing or his being stuck at a low-paying job while his life’s work remains stuck inside his head.

“It was really important to us that, obviously, this show is about a young, gay, overweight Black man,” he said. “It’s very specific to the identity of that story, but we knew that we wanted it to have as much of a universal implication as possible.”

Its acclaim shows that ‘big, Black queer-ass’ shows can succeed on Broadway

That the Pulitzer winner would eventually transfer to Broadway after rapturous reviews seems inevitable now, but until the musical found its producer, Brackett said, the show’s creative team wondered whether “A Strange Loop” was “too out there, too extreme” to find a stage home.
Winning the Pulitzer during the pandemic, he said, “opened up this new door of possibility for us.” After finishing up a successful run in Washington, DC, in 2021, the show announced a long-awaited Broadway transfer.

Jackson tinkered with the script up until the curtain went up on the show’s Broadway opening in April, Brackett said, refining a script that already earned one of the highest honors in the arts.

There’s no guarantee of success for any Broadway production, even one that’s based on a beloved film (see: this season’s musical adaptation of “Mrs. Doubtfire,” which closed shortly after it opened). Original works can be even more challenging to produce and attract audiences to, but Brackett said that the acclaim of “A Strange Loop” shows that “audiences are hungry to be challenged but also to be rewarded.”

Fans of the show will find out on Sunday whether the Broadway League and American Theatre Wing have decided to reward this “big, Black and queer-ass” musical when the Tony Awards air on CBS.