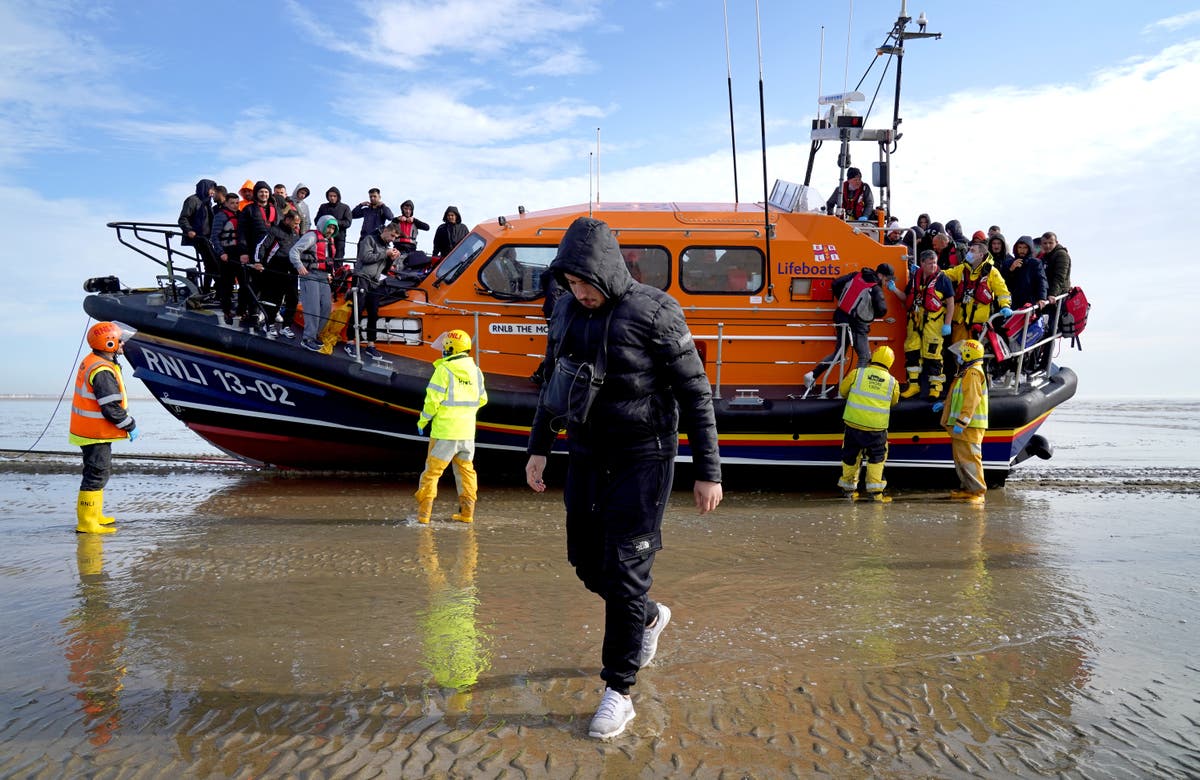 About 250 people are believed to have arrived in the UK after crossing the Channel in small boats on the day when the government spent an estimated £500,000 deporting half a dozen to Rwanda in an operation branded “immoral” by Church of England bishops.

After the failure of last-ditch legal efforts to avoid removal from the UK, seven migrants were due to board a 200-seater Boeing 767 jet at a Wiltshire RAF base on Tuesday evening for the first flight in a programme which Boris Johnson initially said could see tens of thousands sent to the African country.

But a last-minute intervention by the European Court of Human Rights is understood to have kept at least one man in the UK, after an injunction was issued to allow him to take his appeal to judges in Strasbourg.

And protesters attempted to block roads outside RAF Boscombe Down to prevent the others being moved from immigration detention centres.

The prime minister came under fire over the estimated £500,000 cost of the chartered flight, with former international development secretary Andrew Mitchell telling The Independent: “It would be cheaper to put them up in the Ritz for a year on half-board with a bottle of champagne every lunchtime.”

And charities rejected government claims that it would deter other desparate migrants from undertaking the perilous dinghy trip from France through some of the world’s busiest shipping lanes.

“We don’t believe there will be a deterrent effect at all, and the Home Office has been unable to provide any evidence that there will,” said Graeme McGregor of Detention Action. “But even by the government’s skewed reasoning, it’s hard to see how forcing six or seven people onto a plane to Rwanda is going to act as a deterrent.”

As Anglican bishops signed a joint letter denouncing the scheme, Archbishop of Canterbury Justin Welby said: “Deporting asylum seekers should shame us as a nation.”

“The government has ended up targeting torture victims instead of trafficking gangs,” said Ms Cooper.

Lawyers for home secretary Priti Patel were forced to confirm in court that the UK will bring deported individuals back if the policy is ruled unlawful in a judicial review next month.

And Mr Johnson hinted that he may be ready to take the UK out of the European Convention on Human Rights to ensure the continued operation of the scheme.

Asked if the controversial move was on the table, the PM replied: “Will it be necessary to change some laws to help us as we go along? It may very well be and all these options are under constant review.”

The PM provoked fury in the legal profession by accusing those fighting the deportations of “abetting the work of the criminal gangs” of people-smugglers.

In a joint statement, the Bar Council and Law Society responded: “It is misleading and dangerous for the prime minister to suggest lawyers who bring such legal challenges are doing anything other than their job and upholding the law.

“Anyone at risk of a life-changing order has a right to challenge its legality with the assistance of a lawyer, who has a duty to advise their client on their rights.”

Numbers of weekly arrivals detected by the Ministry of Defence have fallen from the 1,071 recorded at the time the policy was announced on 14 April to between 190 and 762 in subsequent weeks.

The latest official figures saw 138 arrive on Monday, while BBC reporters on the scene estimated around 250 were helped to shore on Tuesday.

The fluctuating figures are heavily influenced by factors such as the weather and sea conditions, and there is little sign of a return to the levels seen as recently as 2019, when fewer than 2,000 made the crossing in a year.

The Refugee Council said government claims of a deterrent effect “have already been disproven” by the numbers continuing to travel across the Channel.

“We always knew these measures would do little to stop desperate people making dangerous journeys to the UK, because they do absolutely nothing to address the reasons people come,” said chief executive Enver Solomon.

Joint Council for the Welfare of Immigrants (JCWI) head of policy Zoe Gardner told The Independent there was no evidence that the “desperate and cruel” Rwanda flights will stem the flow of boats.

“This will not make refugees disappear,” she said. “We’ve told this government time and again what would prevent perilous crossings and save lives – and that’s safe routes for people seeking sanctuary here.”

Chief inspector of borders and immigration David Neal last week told MPs he had seen no sign of arrival numbers being reduced by the scheme, while the Home Office’s top civil servant Matthew Rycroft told Ms Patel in a letter in April that “evidence of a deterrent effect is highly uncertain”.

After unsuccessful attempts at the High Court and Appeal Court to block the flight, three Iranian men and one from Vietnam saw their final appeals to be removed from the passenger list rejected at the High Court today, while the Supreme Court turned down an application for permission to appeal by an Iraqi man.

Up to 130 people were initially told they could be on the inaugural Rwanda flight. Home Office sources said that work was underway to overcome legal barriers preventing removals, and many of those who avoided today’s flight can be expected to be on the next, expected to depart within weeks.

Many of those involved are understood to be in detention, and if the policy survives judicial review, further planes are expected to be chartered to take them to Rwanda as and when their cases are processed.

In a press conference in Kigali, Rwandan government spokesperson Yolande Makolo said they were expecting to receive “thousands” of deportees over the life of the partnership signed with Britain.

Challenged over the cost to the taxpayer of the exercise, one source said that the bill for the asylum system currently stands at £1.5bn a year, with £5m spent each week on housing migrants.

“The savings to the taxpayer will come,” said the source. “With people dying and our borders insecure, what cost are people saying is too much to deter these crossings?”

Claire Moseley, founder of charity Care4Calais, which is bringing judicial review proceedings alongside Detention Action and the PCS union, described the removals as “absolutely shocking and horrifying” and said the planned series of flights would be “costly and ineffective”.

“You have to question the motivation,” said Ms Moseley. “It’s not because they want to stop people traffickers and save lives, because if they wanted to do that they would open up more safe routes for refugees.”

And Mr McGregor said it was “absolutely absurd to send a handful of people to Rwanda in an attempt to scare people”, adding: “If the government wants to go ahead with the flight just to prove a point, then it’s pretty desperate.”