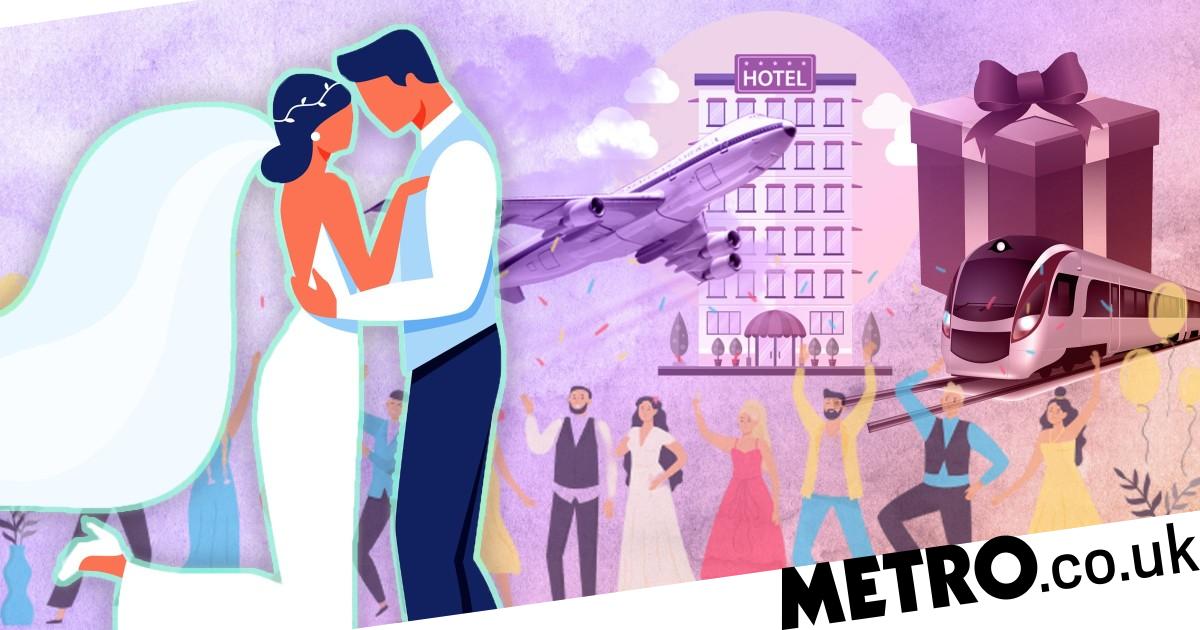 It’s a lovely feeling being invited to share someone’s special day with them.

But increasingly, when a wedding invite drops through the letterbox, with its good-quality card and embossed print, it may be accompanied with an impending sense of anxiety, rather than excitement.

We’ve all been there. And it’s nothing to be ashamed of – you can still be happy for someone and worry about how much money it’s going to cost you. The two aren’t mutually exclusive.

At this point in time, where we’re all cutting back, it’s not always possible to say yes to everything – and when it comes to holidays, nights out and splurges, we’ve probably all had to make some choices about where to spend our hard-earned cash.

But there’s something about a wedding that makes it particularly hard to turn down.

Prices can mount up quickly, especially if the wedding in question is taking place abroad, or will involve travel or an overnight stay somewhere far from home. And that’s before you start thinking utfits, presents, and hair and makeup, and spending money…

In fact, a recent study found that British wedding guests will spend an average of £391 each – a figure that has increased over the years, and will likely keep going up given the current state of inflation and increased living costs. And, of course, some weddings cost way more than this, depending on the location.

For some people, it’s too much and they’ve no choice but to say no – but others feel the pressure, sometimes even getting into debt to afford to go.

Ruby*, aged 28 from Edinburgh, tells Metro.co.uk that she has been invited to attend a friend’s wedding in Croatia next year as a bridesmaid, and – despite not being able to afford it – she doesn’t see how she can possibly decline, without hurting her friend’s feelings.

‘We’re best friends and I know she wouldn’t fall out with me over it but I’d just feel too guilty,’ she says.

‘I was hoping to start saving for a flat deposit this year, but I’ve got this to pay up, as well as two other friends’ weddings taking place in England, so I think I’ll have to put that on the back-burner.’

She stresses that she loves her friend, is happy for her and knows that they’ll have a brilliant time.

Ruby is not alone in her worries. New research from Spareroom.com found that almost one in four (23%) of young people would rather miss out on going to a wedding in the current climate, due to the financial anxiety caused by receiving an invitation.

The data also reveals that nearly half (43%) claim attending weddings has directly impacted their ability to save to get onto the property ladder.

It also found that around a quarter of young people now think an invite to a wedding, hen or stag causes more stress and anxiety than excitement.

A similar number of millennials and Gen Z’s admitted that the increased cost of living will likely impact their ability to attend weddings and hens/stags, both this year and next

I’ve worked it out and it’s going to cost me a few grand in total. I actually don’t know how I’m going to afford to pay my rent

But it’s not an easy thing to say not to: One in five (20%) are anxious about falling out with a friend due to not being able to go to their wedding or hen/stag.

Polly Arrowsmith from London knows only too well that this can happen.

‘I went traveling for 18 months and returned to the UK to be invited to a friend’s wedding. But I couldn’t afford to travel to Harrogate, buy the gift and get a suitable piece of dress wear,’ she tells Metro.co.uk.

As a result, she had to turn down the invite – she says that, until patching things up recently, her non-attendance of the wedding cost her the friendship.

The fear of losing friends possibly accounts for the fact that over a third (36%) of young people have fallen into debt or encountered financial difficulties as a result of attending a wedding, hen or stag.

‘I’ve just turned 32,’ says Georgia from Manchester, ‘and it feels like everyone I know is getting married.

‘It might be to make up for lost time in Covid, but this year, I’ve got six weddings – including one taking place in Devon, and two foreign hen dos.

‘I’ve worked it out and it’s going to cost me a few grand in total. I actually don’t know how I’m going to afford to pay my rent – I’m just putting it on my credit card for now, and will figure it all out later.’

It’s fair to say that there’s a certain amount of pressure to be there on your friend/colleague/cousin/acquaintance’s big day – and the days leading up to it.

But not all weddings are created equal – and it’s easier to say no to some than others. And, it turns out we’re not that bothered about cousins.

The Spareroom research revealed almost a third (29%) of people would turn down their cousins’ weddings if it was too expensive. Just over one in ten (12%) would not attend their siblings’ weddings for the same reasons.

Meanwhile, over half of people would turn down their colleagues (51%) and acquaintances (57%) if they had money worries. Seems fair.

‘The cost of living is affecting everyone, and as much as we all love a good wedding and want to celebrate our friends and family on their special day – sometimes it’s just not possible.

‘We’re seeing more and more weddings further afield, too, which of course is adding to the cost for both the bride and groom as well as their guests.’

However, Lisa advises that it’s perfectly reasonable to decline an invitation if you can’t afford to attend a wedding, especially if it involves travel and hotel costs plus time off work.

But you need to handle the conversation with the engaged couple carefully.

‘Your friend, whether the bride or groom-to-be, is planning one of the biggest and most important days of their lives so emotions often run high, make sure you pick your moment and words carefully to avoid any upset,’ she says.

‘If they are getting married further afield or even abroad, they will most likely be expecting some guests to decline and they will hopefully be understanding of your situation.’

‘Depending on how close you are, you could ask them to go for a coffee or give them a call – try not to do it over text or message,’ Lisa suggests. .

‘If you can’t call them or meet up, maybe send them a lovely RSVP card instead. This just helps to show that you have put some thought into telling them.

She suggests that you start off by being apologetic and explaining the reasons you can’t attend the wedding – but being careful not to put a dampener on their chosen nuptials.

‘It might also be a nice touch to suggest a pre or post-wedding drink, to celebrate with them that way,’ she advises.

And if you can afford to attend the wedding, but a gift is going to be a stretch too far, don’t feel like you have to put yourself into debt for it.

‘Fear not,’ says Lisa, ‘your gift does not need to be expensive.

‘A beautiful wedding card with a lovely heartfelt handwritten message and a bottle of something would be acceptable – especially if you’re having to spend money to get to the wedding.’

Why did nobody tell us that before now?


MORE : Is getting married young the new holding off? Here are the pros and cons


MORE : Kids who got ‘married’ at nursery set to tie the knot for real – 14 years later