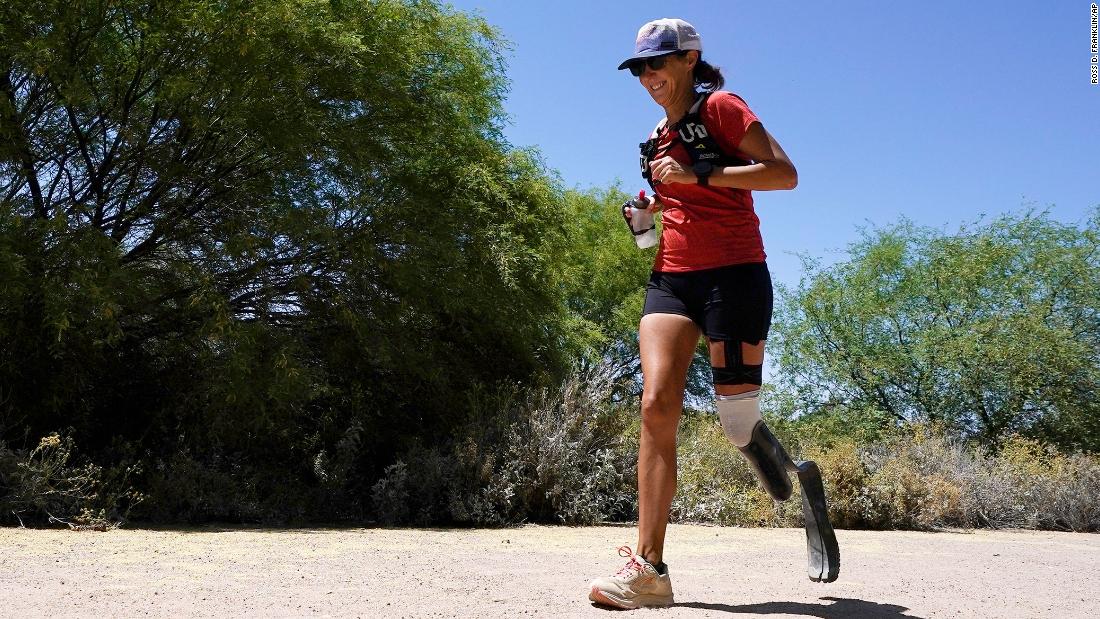 At least, that’s what Jacky Hunt-Broersma, an amputee endurance runner based in Arizona, might have thought before she took up the sport nearly six years ago.

“I wasn’t a runner before I was an amputee,” she tells CNN Sport, “I thought runners were crazy … But I kind of just gradually got addicted to it a little bit.”

Fast-forward to 2022 and the 46-year-old Hunt-Broersma has just completed the self-set feat of running 104 marathons in 104 consecutive days between January and April.

Initially giving herself the target of 100 marathons in 100 days, she started the challenge with several unknowns — “Is my stump going to be able to hold up on the miles? Is my blade going to hold up?” — but as the weeks passed, she surprised herself time and again.

“I didn’t know how my body would react, and it just showed me how strong our bodies can be,” says Hunt-Broersma. “Every day, I kind of just got on with it and got stronger and stronger … your body is just incredible.”

The challenge, it transpired, was “90% mental versus physical.” Summoning the motivation to get out the door each day and run the marathon distance was often the biggest battle.

“You just never knew what the day would bring,” Hunt-Broersma adds.

“It was kind of … going with the flow a little bit. Some days, you just have to get it done — suck it up and (put) one foot in front of the next and just go — and then other days you’d feel great and it’s like you’d fly.”

Running most of the marathons around her home in Gilbert, AZ, Hunt-Broersma did some on a treadmill and took part in the Boston Marathon for her 92nd.

Competing on the streets of Boston was one of the highs of the challenge, but there were plenty of lows, too — namely at the 50-marathon mark when the thought of quitting crossed her mind.

“It was a weird moment because physically I felt okay,” says Hunt-Broersma.

“My body — obviously, it was hurting and all that — but there was nothing major wrong with it; it was just my mind that was done.

“I had to kind of fight those emotions to get through it and just say: ‘You know what, no, you can still do it. You can keep going.’ And once I got over that, you just then switch over to just getting to the target. It’s like you just need to get to that 100.”

Prior to that, there was another low-point 15 days earlier when she had decided to split her daily run into two half-marathons to make time to look after her children.

But after people questioned whether splitting up a marathon was within the “rules” of the challenge, Hunt-Broersma felt she had no choice but to run another full marathon that evening, eventually completing it five minutes before midnight.

“So I was like, ‘Okay, fine, you know what? I’m just going to have to go out and just do this.’ And that’s kind of what I did. I don’t know how I managed to do it, but I did … You learn to just suck it up and just get it done.”

Since completing her 104th marathon, Hunt-Broersma has started the process of applying for her feat to be officially recognized by Guinness World Records, with the current record of 95 set by American Alyssa Clark in 2020.

Getting a record ratified is not straightforward. The months-long process involves submitted GPX files of every run, photos of the start, middle and finish, video footage and a witness report.

“That process is probably harder than the running part, to be honest,” Hunt-Broersma jokingly suggests.

‘A sense of freedom’

Born and raised in South Africa, Hunt-Broersma lived in England and the Netherlands prior to moving to the United States.

Her leg was amputated after she was diagnosed with Ewing sarcoma — a rare type of cancer affecting bones or the tissue around the bones — in 2001. Through running, which she took up 15 years later, she started to appreciate what her body was truly capable of.

“When I became an amputee, you become very limited — everyone tells you: ‘You can’t do this, you can’t do that,'” says Hunt-Broersma. “And then when I put on a running blade, there was a sense of freedom. I felt like I was flying and I was doing something that I thought I couldn’t do.”

She started with five kilometer runs before soon progressing through the distances — 10ks, half-marathons, marathons, and now ultra-marathons.

She is currently training to compete to compete at the Leadville 100 — a 100-mile race in Leadville, Colorado, referred to as the “Race Across The Sky” — in August and Moab 240 — a 240-mile race through Utah’s deserts, rocks and mountains — in October.

Competing in those iconic endurance events feels a far cry from the days before Hunt-Broersma took up running.

“There was an element where I felt ashamed of who I was,” she says. “I didn’t want to be an amputee. I didn’t want people to see me as different.

“Whereas running has given me confidence — I can just be who I am. Because I know my body has run 100 miles, I’ve done all this on a prosthetic, so I’m kind of proud of being who I am now.”

As part of her marathon challenge, Hunt-Broersma raised close to $200,000 for Amputee Blade Runners, a charity providing running blades — which are often costly — for amputees.

That far surpassed her initial expectation of $10,000 — just as she exceeded her own expectations when running 104 consecutive marathons.

“With my running, it’s taught me that I’m capable of so much more,” says Hunt-Broersma. “I thought this would be a great way to show people what you could do if you just pushed yourself out of your comfort zone.”

Bobby Bonilla Day: He hasn’t played in MLB for more than two decades. One team is paying him $1.2 million a year until 2035