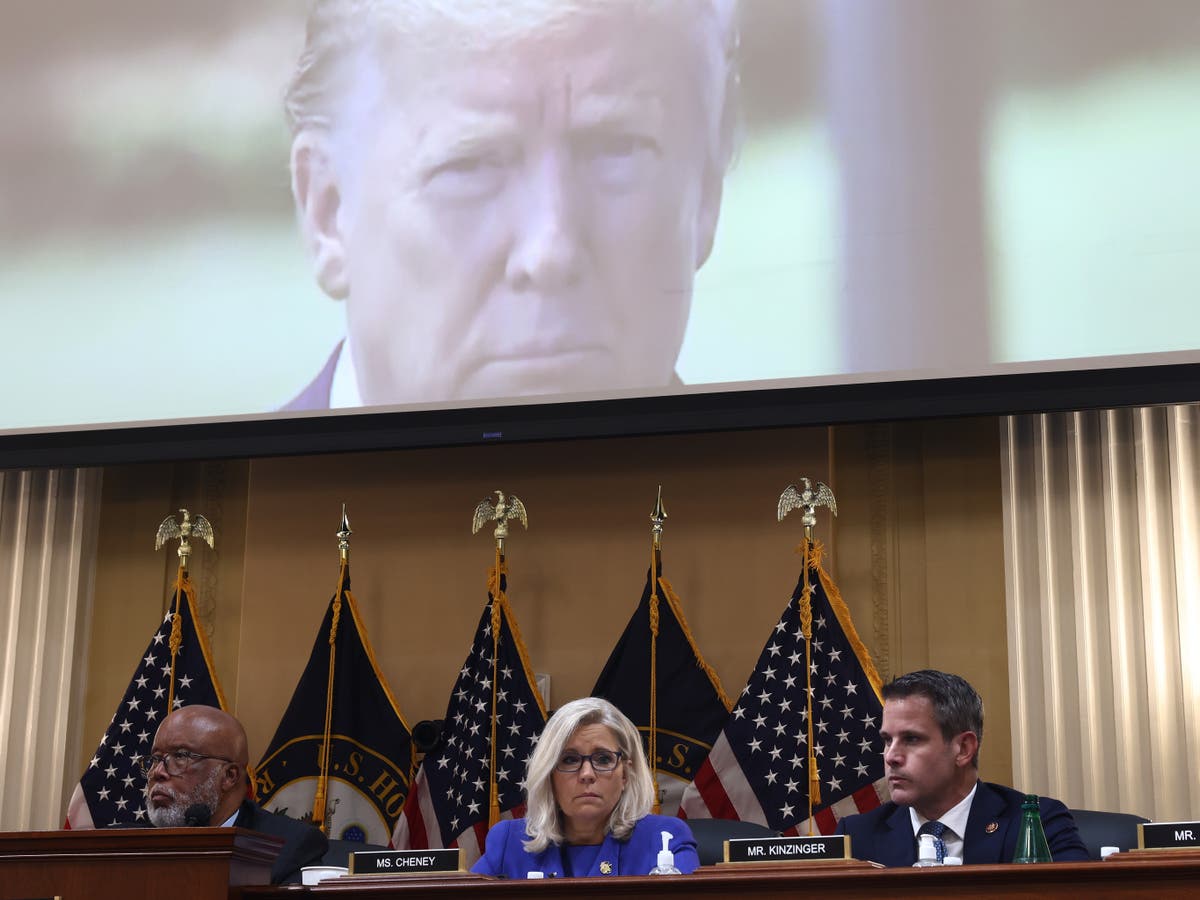 Mr Trump hit out at the political “hacks” and “thugs” on the committee on his own social media platform.

The first hearing wrapped up on Thursday after two hours of testimony about the violent Capitol riot.

Excerpts of interviews with former Attorney General Bill Barr, Ivanka Trump, and Jared Kushner were also played. Mr Barr testified he told then-President Trump that the idea the election was stolen was “bulls***”.

Ms Trump said she respected his opinion and had also accepted that.

The hearing was shown unseen graphic footage of the attack on the Capitol that distressed some in the room, followed by emotional testimony was heard from Officer Caroline Edwards who recalled being injured when the mob turned violent and the “war zone” that followed.

Some of the Capitol police officers present on the day of the January 6 Capitol attack could be seen crying and emotional as the committee showed a shocking compilation of bodycam footage and documentary video on Thursday during the first primetime hearing into the attack on Congress.

In the video, set up by committee chair Bennie Thompson, members of US Capitol Police are heard desperately calling for reinforcements as they are viciously attacked by a massive mob of Trump supporters who are seen smashing windows, striking officers, and wrestling with metal barricades.

Three Capitol rioters appeared in court just hours before the January 6 House select committee hearing and pleaded mercy before federal judges deciding their punishment for participating in the assault.

“I made one mistake in my life and I have immediately took responsibility for it,” Daughtry was quoted as saying by ABC.

“I apologize to the court for my indiscretion. But does a person not get to make at least one mistake in their entire life?”

“I’m embarrassed,” the younger Sywak was quoted as saying by Buffalo News.

“I’m very remorseful for what I did,” he said.

“It’s not right that so many police officers were injured.”Of the 820 individuals arrested and charged in connection with last year’s 6 January Capitol insurrection, 300 have pleaded guilty to an array of charges.

Accusing the Democrats of “distracting” Americans, he said: “Democrats hate America and they hate you!”

Fox News host Sean Hannity hit out at the Democrats as the January 6 House Select Committee’s first hearing was held on Thursday.

Mr Hannity referred to the hearing as “the dullest, the most boring, there’s absolutely nothing new, multi-hour Democratic fund-raiser masquerading as a January 6 hearing,” during his show on Fox News, without giving details to his viewers about the proceedings of the hearing.

Former president Donald Trump hit out at the January 6 committee following its first public hearing on Thursday evening and repeated falsehoods about the 2020 election.

In a statement posted on his social media network Truth Social, Mr Trump called the committee investigating the attack on the US Capitol “political hacks.”

House select committee chairman Bennie Thompson has said that the panel will release transcripts of the closed door depositions that it conducted in its investigation into the 6 January insurrection.

“We’ll make it available,” Mr Thompson said in an interview with CNN’s Jake Tapper after the committee’s first hearing.

He added that the committee planned to cooperate, if requested, with the Justice Department’s investigation into the isurrection though the committee’s job wasn’t to determine whether crimes had been committed.

The Justice Department had asked for the transcripts last month, but the panel refused ahead of Thursday’s hearing.

Ivanka Trump testifies that she accepted there was no election fraud

The committee investigating January 6 and the attack on Congess opened with bombshell video footage on Thursday that showed a number of his most trusted aides and advisers, including his daughter Ivanka Trump, explaining that they knew the election was not stolen.

New York Rep Alexandria Ocasio-Cortez tweeted her reaction to the never-before-seen footage of the Capitol riot, specifically taking aim at Colorado Rep Lauren Boebert and recalling her own experience of that day in January 2021.

And then went after the House Judiciary GOP’s glib reaction to the testimony:

Voices: Trump was terrified of the January 6 hearings. Tonight proved he was justified

There’s a reason Fox News didn’t want to air this prime-time hearing. What we saw was the truth about January 6 showcased with captivating effectiveness.

What happened on that day was not a “tourist visit,” as Republican Rep. Andrew Clyde (GA) claimed. It was not “legitimate political discourse,” as the RNC argued. It was not a “love fest” as Donald Trump delusionally declared. And the responsibility for this does not fall on “everybody in the country,” as Minority Leader Kevin McCarthy (R-CA) asserted just hours before tonight’s hearing. This was a violent, criminal conspiracy to overthrow American democracy perpetrated by Donald Trump, his allies, and domestic extremist groups. Or, to put it as simply as Chairman Bennie Thomson (D-MS) did, January 6 was “the culmination of an attempted coup” — an attempted coup that’s far from over.