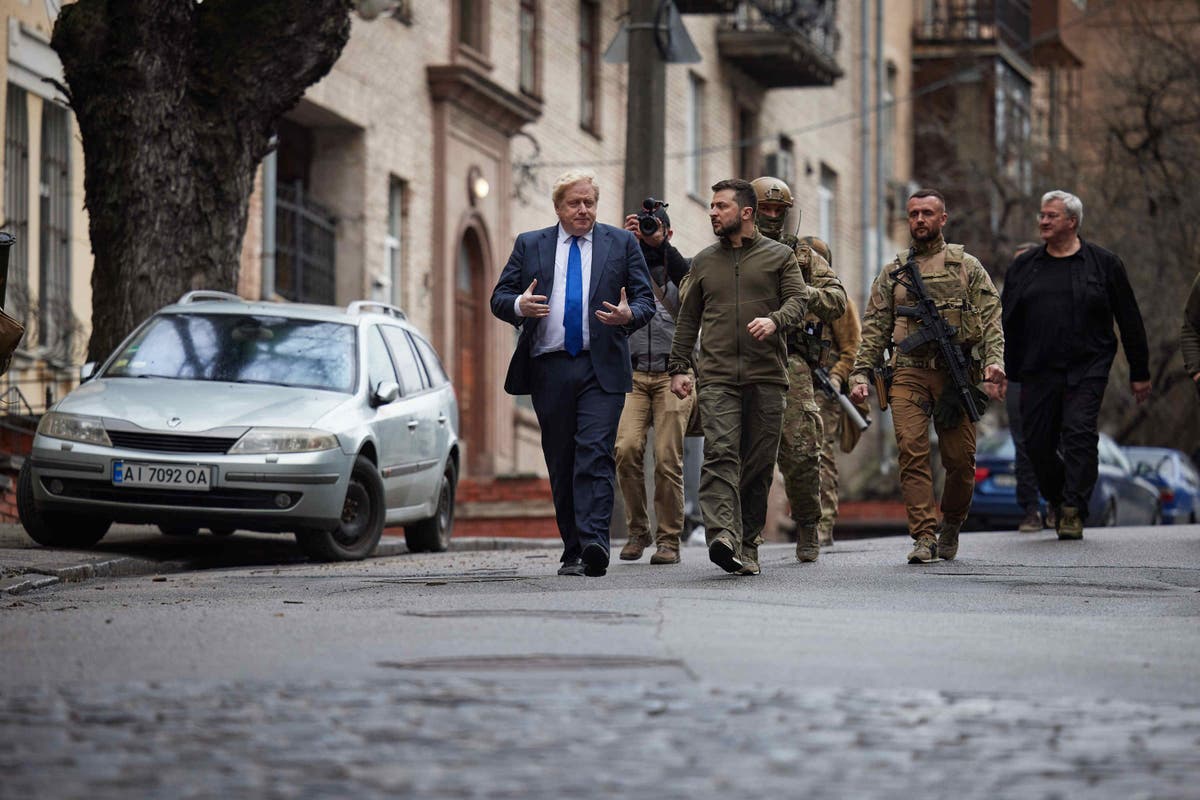 Boris Johnson has made a surprise visit to Volodymyr Zelensky in Kyiv to offer a major training operation he believes could “change the equation” against the Russian invasion.

The Prime Minister visited the Ukrainian capital on Friday to pledge training to up to 10,000 soldiers every 120 days, as he vowed “we will be with you until you ultimately prevail”.

Downing Street said the British-led scheme would train and drill Ukrainian troops to accelerate their deployment, rebuild their forces and increase their resistance.

Arranged in secret, it was Mr Johnson’s second visit to Kyiv since Russian president Vladimir Putin began his offensive in February.

“My visit today, in the depths of this war, is to send a clear and simple message to the Ukrainian people: the UK is with you, and we will be with you until you ultimately prevail,” Mr Johnson said in a statement.

“As Ukrainian soldiers fire UK missiles in defence of your nation’s sovereignty, they do so also in defence of the very freedoms we take for granted.

“That is why I have offered president Zelensky a major new military training programme that could change the equation of this war – harnessing that most powerful of forces, the Ukrainian determination to win.

“Two months on from my last visit, the Ukrainian grit, determination and resilience is stronger than ever, and I know that unbreakable resolve will long outlive the vain ambitions of president Putin.”

The costs of the new operation were uncertain, with Downing Street noting that the training programme was just an offer for now.

If accepted by Mr Zelensky, there would then be discussions on the scale of the operation, which is expected to take place outside Ukraine.

Instead, a No 10 source said the existing training programme in Britain could be increased and could take place in countries neighbouring Ukraine if allies agree to come on board.

The soldiers would be expected to spend three weeks on the training course, learning skills for the front line, as well as training on cyber-security and counter-explosives.

Mr Johnson and the president also discussed how the UK can assist in ending the Russian blockade of grain, amid fears it could lead to world hunger and a surge in famine.

Television footage of the visit showed Mr Zelensky showing Mr Johnson the wreckage of burned out Russian tanks and other vehicles on display in St Michael’s Square in the centre of Kyiv.

The two leaders were accompanied by Ukrainian officials – some in combat fatigues – although there was no sign of members of the public.

A message on Mr Zelensky’s Telegram account read: “Many days of this war have proved that Great Britain’s support for Ukraine is firm and resolute.

Video from the Ukrainian government showed Mr Zelensky warmly greeting the Prime Minister with a “hi, Boris” as he arrived at the presidential palace.

Mr Johnson tweeted a picture of himself with Mr Zelensky, adding: “Mr President, Volodymyr, it is good to be in Kyiv again.”

The Prime Minister pulled out of an expected appearance in Doncaster for a conference of northern Tory MPs to dash to Ukraine.

Mr Johnson’s first wartime visit to Kyiv came in April, as Mr Putin shifted the focus of his depleted troops to the eastern Donbas region.

That has become a protracted battle and Mr Zelensky has been pressing allies to supply further, and more sophisticated, weaponry.

Woody Allen says he’s a ‘prude’ and would remake his most ‘dirty’ movie in...

Overwatch 2: How to get beta access, what new features will be included and...

Why are so many flights being cancelled?

Quick Area - June 28, 2022 0
For many in the UK, a spring or summer holiday has become a “fingers crossed” prospect rather than a sure thing.As anyone who has a flight booked in the coming weeks will know,...
Read more

Quick Area - June 28, 2022 0
If you expected the man who’s just completed an epic four-year challenge to visit every railway station in Great Britain to be some kind of train nut, you’d be mistaken.“I’d describe myself as...
Read more