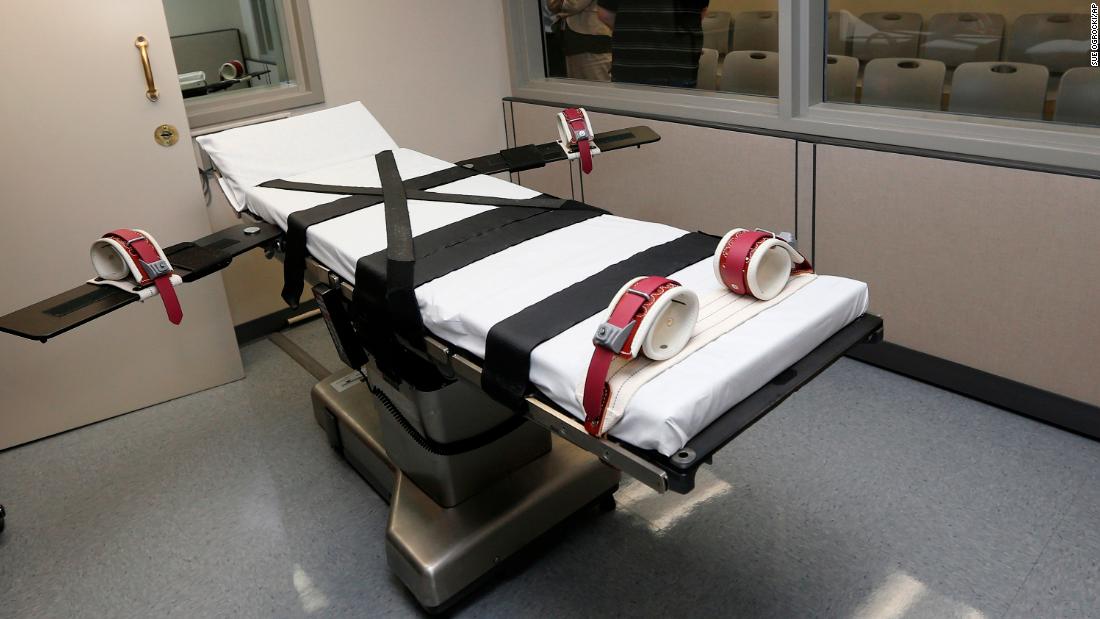 Executions in Oklahoma are scheduled by the state Court of Criminal Appeals. The motion from Attorney General John O’Connor requests executions take place every four weeks, starting no earlier than late August in order to give the Department of Corrections time to prepare.

Attorney Jennifer Moreno told CNN on Tuesday the plaintiffs are considering an appeal, saying the state’s protocol “creates an unacceptable risk that prisoners will experience severe pain and suffering.”

The attorney general is asking for 25 prisoners to be scheduled for execution. One prisoner, Wade Greely Lay, is scheduled to have a jury trial next May to determine whether he is competent to be executed, and O’Connor says his execution date should be delayed until after the trial is concluded.

The lawsuit, brought on behalf of 28 death row prisoners, named officials with multiple Oklahoma corrections agencies and claimed the injection method causes “constitutionally impermissible pain and suffering,” according to the ruling.

In a judgment filed Monday, Judge Stephen Friot of the US District Court for the Western District of Oklahoma ruled the prisoners’ attorneys fell “well short of clearing the bar set by the Supreme Court” for lethal injection challenges.

The state’s lethal injection protocol uses a combination of the drugs midazolam as a sedative, vecuronium bromide as a paralytic, and potassium chloride to stop the heart.

Friot described a “battle of the experts” during the weeklong trial earlier this year, in which testifying experts frequently and strongly contradicted one another.

“Rarely, in any field of litigation, does a court see and hear well-qualified expert witnesses giving expert testimony as squarely — and emphatically — contradictory, on the issues at the heart of the matter, as this case,” Friot wrote in a statement of facts filed Monday.

During the trial, the court considered four recent state executions, including the October 2021 execution of John Grant. A media witness to Grant’s execution said at the time Grant convulsed and vomited immediately after receiving a dose of midazolam.

While examining why Grant may have vomited, Friot cited the speed of administering such a large dose as a possible reason, noting manufacturer advice to administer midazolam slowly and the drug’s possible side effects of vomiting or retching.

Friot also rejected “speculation that Grant was conscious during this episode, whether it was vomiting or passive regurgitation,” citing a doctor’s conclusion during the execution he was unconscious.

Grant was the first person to be executed in Oklahoma since the state put a moratorium on lethal injections in 2015 following a botched execution in 2014. At the time, state officials said executions would resume after the state revised its protocol and obtained the drugs necessary for the procedure.

O’Connor had applauded Friot’s decision, saying, “The State has proven that the drugs and method of execution satisfy the United States and Oklahoma constitutions.”

“Midazolam, as the State has repeatedly shown, ‘can be relied upon … to render the inmate insensate to pain,’ ” O’Connor said, adding he intends to seek execution dates from the Oklahoma Court of Criminal Appeals for inmates awaiting execution.

There are 43 people who have been sentenced to die in Oklahoma, though two are incarcerated in other jurisdictions.

In their suit, the death row prisoners proposed two alternative methods of execution: injection of a combination of fentanyl with an anesthetic and death by firing squad.

Execution by firing squad, while uncommon, is offered as an alternative method in four states. Lethal injection is the widely preferred execution method in the United States.
A state department of corrections official testified during the trial the agency is unable to procure fentanyl or either of the proposed anesthetics. The corrections official’s comment echoes a common argument corrections agencies across the nation have been making for years as they struggle to obtain the drugs necessary to carry out lethal injections due to manufacturers not wanting their products used in executions.

In his rebuttal of the firing squad method as a viable alternative, Friot concluded “execution by firing squad, done right, is highly likely to cause a quick death,” however “it is difficult to conceive that a method of execution which requires the sternum to be shattered … can be called painless.”

Biden ‘shocked’ by Highland Park shooting: ‘There is much more work to do’