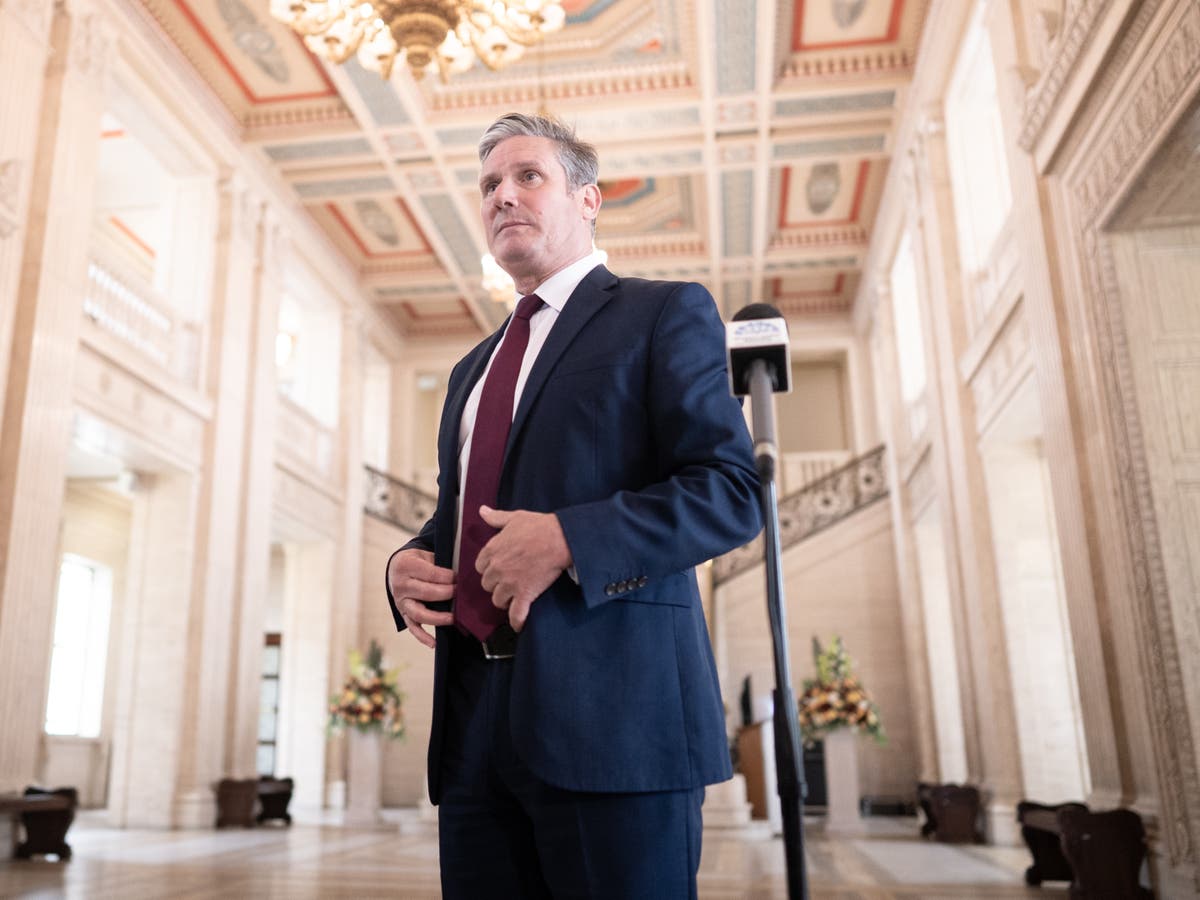 It comes as senior Conservative MPs told The Independent there was a lot of “unease” about the idea of breaking an international treaty, while Tory peers vowed to dilute and delay the bill in the Lords.

The Labour leader said his party would oppose the plan to override parts of Brexit deal agreed with the EU – set to be published in parliament on Monday – and promised to “scrap” the legislation if the bill becomes law.

“We would scrap the legislation,” Sir Keir announced on a visit in Belfast – who said the UK-EU row over protocol checks “can be overcome around the negotiating table with statecraft, with high levels of trust”.

The Labour leader added: “I think there has been an impasse in the negotiations because we haven’t seen the high levels of trust that we need for negotiations like this, not least from our prime minister.”

A senior Conservative MP said many in the “one nation” caucus of party moderates were opposed to the government’s “unilateral law-busting approach”.

“We may not see a huge rebellion in the Commons,” the senior figure said. “But I’ve spoken to a few Brexiteers who are also concerned, who say taking back control was not about becoming an international law breaker.”

Another senior Tory backbencher said there was “unease” about the plan among many MPs, outside of the hardline Brexiteers in the European Research Group (ERG). “There is concern that it could break the law. Colleagues will be looking for assurance on the legal position next week,” the MP said.

No 10 confirmed on Friday that the legislation led by Ms Truss – and a summary of the government’s legal position – will be released on Monday. But the full legal advice given to ministers will not be disclosed.

Mr Johnson and foreign secretary Liz Truss have come under pressure by Tory MPs in the ERG and the DUP to make the bill as bold as possible in removing checks and customs controls on goods moving between Great Britain and Northern Ireland.

The PM and Ms Truss met the ERG’s Bill Cash earlier this week to discuss their legislative plans – said to involve a “dual regulatory regime” allowing goods produced in GB to move into NI, and vice versa, without checks.

Conservative party grandee Ken Clarke said the “vast majority” of peers will back attempts to block and amend the bill, telling the Daily Mail that the upper chamber will “hold it up for a considerable time”.

Fellow Tory peer Michael Howard – the former party leader who has previously rebelled against Brexit legislation – also said the bill would “encounter a rocky road” in the Lords.

In November 2020, peers handed the government a significant defeat over Internal Market Bill, its previous bid to override parts of the Brexit withdrawal agreement, voted 433 to 165 to remove key clauses.

Mujtaba Rahman, analyst at the Eurasia Group consultancy, said the EU would “not overreact” to the bill next week. He said Brussels chiefs are aware it could take six to 12 months for the legislation to move through parliament.

But the Brexit expert told The Independent that he expected the European Commission to start “preparatory work” on possible retaliatory moves – including tariffs – as a bill moves through parliament.

Meanwhile, Sir Keir has said that Labour will also oppose controversial government legislation to end the prosecution of veterans address the legacy of the Troubles in Northern Ireland.

The Northern Ireland Troubles (Legacy and Reconciliation) Bill is aimed at offering immunity to people who are deemed to have co-operated with an information retrieval body.

“You don’t proceed in Westminster with controversial legislation when it doesn’t have the backing of the political parties, victims’ groups here in Northern Ireland and the Irish government,” Sir Keir said.