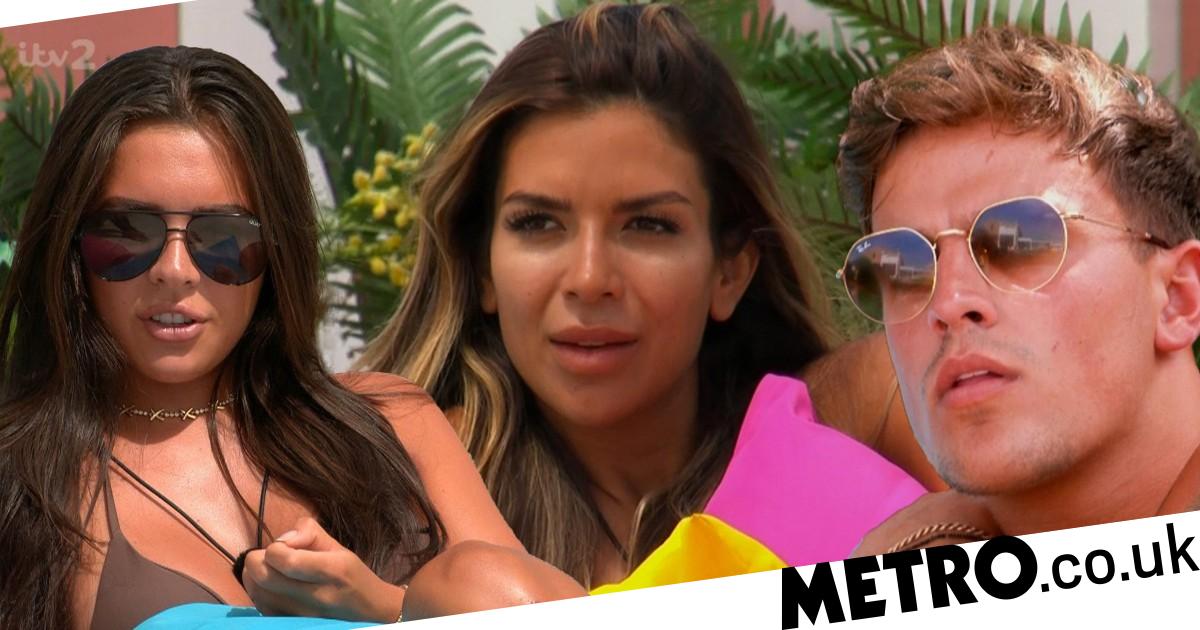 Love Island once again brought us another drama-filled episode, this time leaving Gemma Owen and Luca Bish’s relationship on the rocks and we have to wonder, is anyone safe?!

We were treated to some ‘mind-reading’ from Dami Hope and saw Davide Sanclimenti continue his no-nonsense attitude towards Ekin-Su.

Let’s break it down.

This week has seen former flames Davide and Ekin-Su getting flirty, with fans convinced we were about to see an ‘enemies to lovers’ storyline.

Even Ekin-Su saw it as a possibility, admitting that there was still something there between them – or so she thought.

Many viewers were left unimpressed, with some branding the comment ‘vile’.

Italian is meant to be the language of love, Davide!

So, when Dami tells you he’s going to read your mind, of course you say yes! But things didn’t turn out too well for Gemma when he gave it a go.

He told her he reckons Luca’s a tad more into her than she’s into him, and that if that if another boy came in, who was exactly her type, her head could turn. She told him he’s ‘not too far off’.

Naturally, Ekin-Su, who’s putting in overtime to bring us TV gold this series, went immediately to tell Jacques O’Neill and Paige Thorne, with Jacques insisting he had to tell Luca.

Basically, news spread like wildfire with Luca being the last to know – leaving him annoyed that Gemma didn’t talk to him immediately.

Ekin-Su, however, insisted she’d done nothing wrong, saying it’s too easy to blame her.

It then all kicked off in a chat between Gemma and Ekin-Su, with Gemma accusing her former pal of ‘d**khead behaviour’ and ordering her to ‘keep her nose out of other people’s business’.

Later, Gemma and Luca had their chat, with Luca insisting he wanted to ‘sack it off’ if it turns out he’s more into her than she’s into him.

Their future was left uncertain, after Luca insisted his head wouldn’t turn.

Sunday night saw Jacques opening up about his feelings to Paige for the first time – and he quickly regretted it on Monday night, when he spotted her chatting to Jay Younger.

It all came to a head when Jacques asked Paige if she wanted to go for a swim, and she didn’t immediately follow him – leaving Jacques fuming.

Basically, he was feeling sensitive after opening up to her, and insisted to the others that he regretted doing so.

Paige stormed off during their chat, with Jacques left fuming – however, it seems things are about to get better between them.

Paige has been getting to know Jay, with Jay even picking her at the recoupling.

However, Monday night’s episode saw Paige decide that she wants to stick with Jacques – and she had to break the news to Jay.

It was a drama-free chat, with Paige admitting it was hard for her to be so ‘direct’ but she’s happy with Jacques.

Jay took it well, despite that leaving him with few options in the villa. Could a bombshell be on the way for him soon?

As one relationship ends, another heats up…

Tasha Ghouri and Andrew Le Page have had a rocky time of it recently, but it seems they’re on the up, after Tasha told him she wants to concentrate on their romance, rather than getting to know new boy Charlie Radnedge.

Of course, Andrew was over the moon – but we don’t doubt there’s more drama to come.