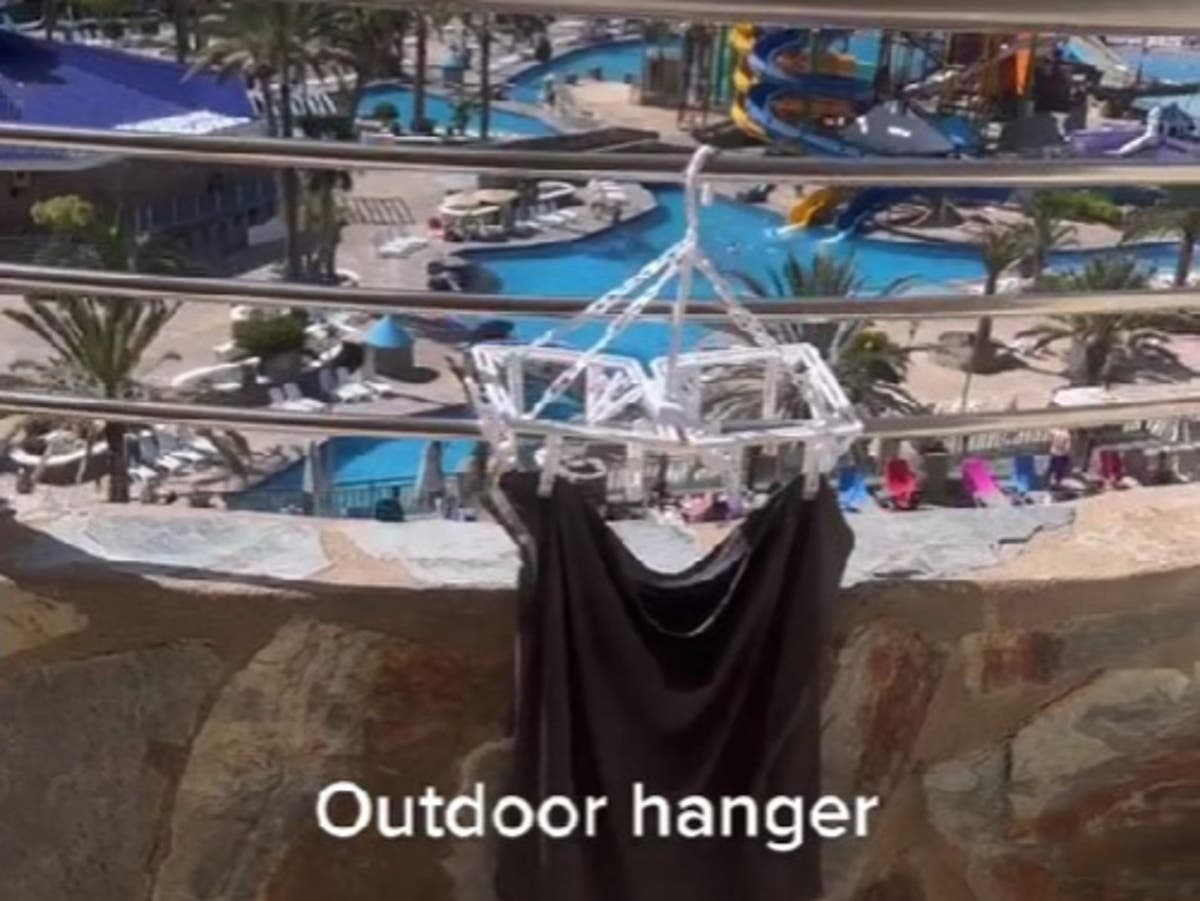 Not all holidaymakers are born equal – some people just have a knack for packing a suitcase like a pro, as a viral TikTok video shows.

One man’s wife has become a travel sensation for her smart, practical packing list for a summer holiday in a hotel.

In a video entitled ‘Things my wife takes on holiday which just make sense’, Thomas Clifford marvels at a range of nifty time-savers and useful items his wife has introduced him to on their trips.

The post has already had more than 1.1 million views and 35,200 likes as TikTok travellers take note of Mrs Clifford’s handy holiday items.

One of them is a thin, canvas pop-up laundry hamper to put dirty clothes in while in the hotel room or apartment; another is a UK extension cable plugged into a European plug adapter.

Meanwhile a hanging laundry airer with multiple clips is shown attached to a balcony railing in the sun while the couple’s swimwear dries.

Next up is a small, round, waterproof Bluetooth speaker, which is shown stuck to the shower wall in their hotel room.

As well as all being useful for day to day holiday life, one thing all four have in common is that they’re light, compact and reasonably affordable.

“I hate to admit it, but she’s on to something,” Mr Clifford captioned the video.

Impressed followers agreed: “Ask your wife to set up her own social media page and share her amazing ideas that make sense with the rest of us pls,” wrote one.

“So I already do washing basket and extension [cable]. Definitely taking on board the speaker and hanger!” commented Louise Jones.

However, some smart packers were already ahead of the curve: “I’ve been taking washing baskets for years. I even take one for lights one for darks so I don’t need to sort washing when I get home,” wrote Tasha Fair.

The video was so popular that Mr Clifford posted a follow-up clip, entitled, “More things my wife takes on holiday which just make sense.”

These ideas were a little more out-there, with one being a chunky make-up brush the couple apparently uses to daub on sun cream.

Separate beach and pool towels were another, “to stop sand getting by the pool” – handy, perhaps, but more likely to take up luggage space.

A third was “insulated bed pockets” which appeared to be a sun-lounger cover with pockets to keep drinks and phones cool.

“I need this lady in my life! She’s an absolute genius. loving these ideas,” wrote one follower.

“This woman might be my holiday idol,” added Sarah Adams.

TikTok is a hotbed of sneaky travel tips aimed at budget travellers, from how to cram extra clothes into your small cabin-bag allowance, to how to book the cheapest flights online.

Last week a video went viral after one woman shared her tip for getting around the 100ml liquids limit for hand luggage; another user revealed her technique to bagging a completely free luxury holiday.

‘Bring food onboard and don’t get left behind!’: Traveller shares tips from a Thailand sleeper train

Ask Me Anything: Simon Calder to answer your travel questions about passports, train strikes and airport chaos