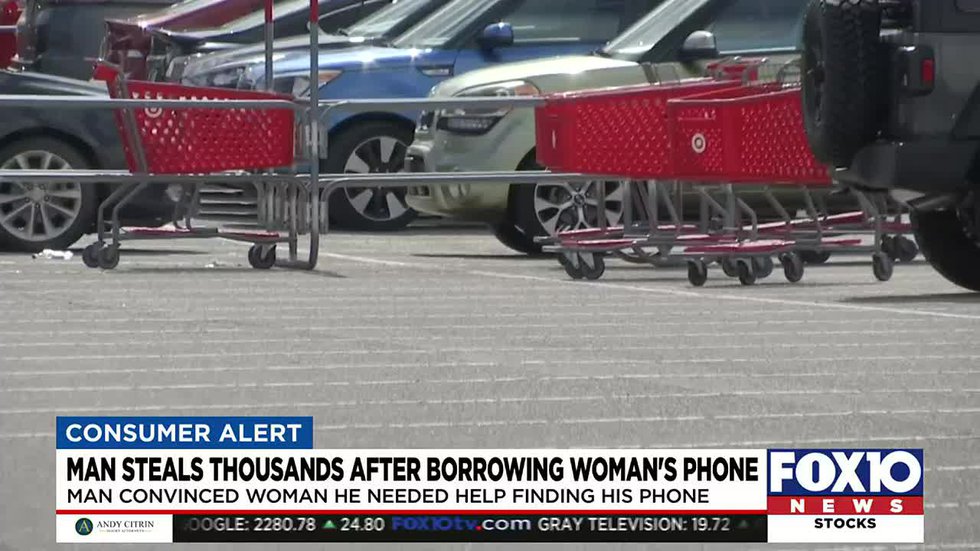 MOBILE, Ala. (WALA) – A reminder that could save you a lot of money and heartache. High-tech pickpockets can take your money without even reaching into your pocket. It happened to a woman in Mobile.

Kasey Johnston tells FOX10 News Anchor Lenise Ligon she was shopping at Target on Schillinger Road in Mobile‚ on Monday, with her son when she says a man asked to use her phone. Johnston said the man told her he needed to call his dad to help him find his phone he’d lost in the store.

He made the call but Johnston said he also took four thousand dollars from her account; right from underneath her nose.

“What happened is he locked my phone and then said, hey, I accidentally locked you phone…so when I entered my passcode he watched me,” explained Johnston. “He then went to my banking account app and when face ID didn’t work he entered in the passcode he’d memorized and gained access to my accounts.”

Johnston said she felt targeted because she was trying to care for her son and the alleged thief used that to his advantage. She is sharing her story so this doesn’t happen to anyone else.

“I have my guard up now as much as I’m trying not to. I just don’t trust people anymore and I’ve always tried to help people and I got burned yesterday in a big way.”

The Better Business Bureau says what happened to Kasey is an important warning, especially since a number of times, these situations go unreported.

The agency’s best advice is to require a face ID and pin to access not just your phone, but the Venmo app itself and that passcode should be different than what you use to unlock your phone.

Johnston tells FOX10 News Mobile Police and Venmo are investigating. Police describe the man as in his mid 20s to 30 years old, with short dreadlocks, and a thin build. He was wearing a red baseball hat, yellow pants, and a white t-shirt reading, “I love awful lot of cough syrup.”

Investigators say the crime happened between 7:42p.m. and 8:15p.m. Anyone with information should call MPD.

Download the FOX10 Weather App. Get life-saving severe weather warnings and alerts for your location no matter where you are. Available free in the Apple App Store and the Google Play Store.