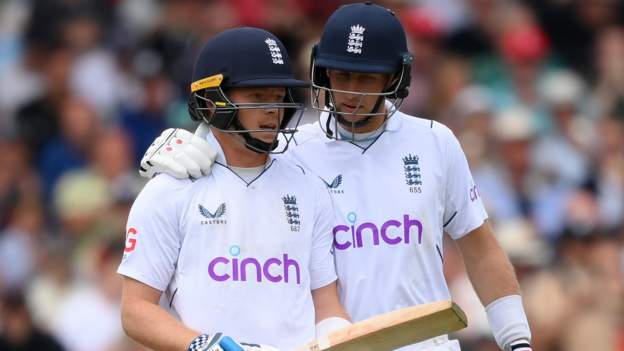 Scintillating centuries from Joe Root and Ollie Pope kept England in the second Test with New Zealand on a riotous third day at Trent Bridge.

Root, in form far beyond anyone else in the world, is 163 not out, while Pope vindicated his selection at number three with 145.

After Alex Lees fell for 67, Root and Pope flayed the New Zealand bowling in a third-wicket stand of 187.

But that was nothing compared to the entertainment provided by England captain Ben Stokes, who crashed 46 from only 33 balls.

There is still work to do for England, but they should be looking to first get level with New Zealand, then build a handy lead.

Their Sunday effort has given them a strong chance of preserving their 1-0 series advantage, and maybe even a shot at victory.

‘Bazball’ gets England back in it

This was the day when the influence of new England Test coach Brendon McCullum has been most obviously on show.

At 90-1 overnight, 463 behind, it would have been typical of England to wilt. Instead, they attacked from the outset, with every batter looking to get after the New Zealand bowling.

Aided by a true surface and lightning-fast outfield, this was England playing ‘Bazball’ to devastating effect. The scoreboard rattled along to the delight of the energetic Trent Bridge crowd.

New Zealand did not help themselves – they missed catches off Root twice and gave a life to Ben Foakes to go with reprieves handed to Lees and Pope on Saturday, while off-spinner Michael Bracewell was underused. The Black Caps also had to deal with a back injury to fast bowler Kyle Jamieson.

But this was an exhilarating assault by England, one that has brought this Test to life and set up the possibility of a thrilling final two days.

For England to win they will have to wind a way of dismissing New Zealand in their second innings – a big ask given the nature of the pitch.

Still, McCullum will ask them to believe that anything is possible.

Pope had not batted at number three in first-class cricket before this series, but was recalled because new captain Stokes was adamant he wanted the Surrey man in his team.

Pope repaid the faith with his second Test century and, curiously, the first of his 14 in first-class cricket made at a ground north of the River Thames.

After being dropped on 37 the previous evening, Pope resumed on 51 and, along with Lees, was determined to pressure the New Zealand bowling on Sunday morning.

The intent led to a number of nervy moments for both men and was Lees’ undoing when he flashed to first slip after making his maiden Test half-century, but Pope grew in stature, peppering the boundaries square of the wicket on both sides.

His hundred, reached by pushing Matt Henry through the covers, came from 160 balls. At one stage, with the same bowler packing the leg side, Pope backed off to play an outrageous cut for four.

Pope was eventually undone after a lengthy break to change a damaged pad. He top-edged a pull off Trent Boult to long leg and was given lengthy congratulations from Root as he departed.

Root does it again

Root is so prolific that he is exhausting all the superlatives. This was his 10th century since the beginning of last year and second in as many Sundays.

It was a carefree hundred – at 116 balls the fastest of his 27 in Tests. As a result, there were loose moments – on 27 he burst the hands of second slip Tim Southee and could have been caught on 52 when a top-edged slog-sweep at Southee landed between the wicketkeeper and long leg.

There were also the classic Root characteristics. Rhythmical footwork, urgent running and sweet off drives. When he reached three figures by inside-edging Daryl Mitchell, his first reaction was to laugh.

The stand with Pope saw runs flow at nearly 4.5 an over and, after Jonny Bairstow gloved Boult behind, Root’s time with Stokes bordered on carnage.

The captain ran down the pitch to the pace bowlers and launched Bracewell for a huge six, only to then hole out looking for another maximum. Sixty-one runs had been added in 56 balls.

There was still time for Root to share another 68 with Foakes, who overturned being given caught behind on eight and was dropped by Will Young at deep square leg on nine.

Root continued to attack right up to the close. His fetch from outside off stump to whip Southee through mid-on was perhaps the most audacious stroke of a remarkable day.

“He’s such a joy to watch and he makes batting look so easy.

“It’s just that drive and determination. You’ve got to have an incredible appetite to just keep on scoring centuries.”

England all-rounder Moeen Ali: “During Covid when everyone was locked down, Root got all his dismissals and had a look where he can get better.

“He did this thing where he batted 30 overs on the bowling machine. Have a break. Then bat 30 overs on the machine again so it can help his concentration and he can bat the whole day. That really helped his game.

“That is why he’s so good and what makes him a great, and probably our best ever, play. The way he trains is the most impressive thing.”

BBC cricket correspondent Jonathan Agnew: “If you haven’t had the chance to watch Joe Root today, then I implore that you do because that was batting poetry. Sitting and just watching that was an absolute privilege.”

Hong Kong handover: Am I Chinese or a Hongkonger?