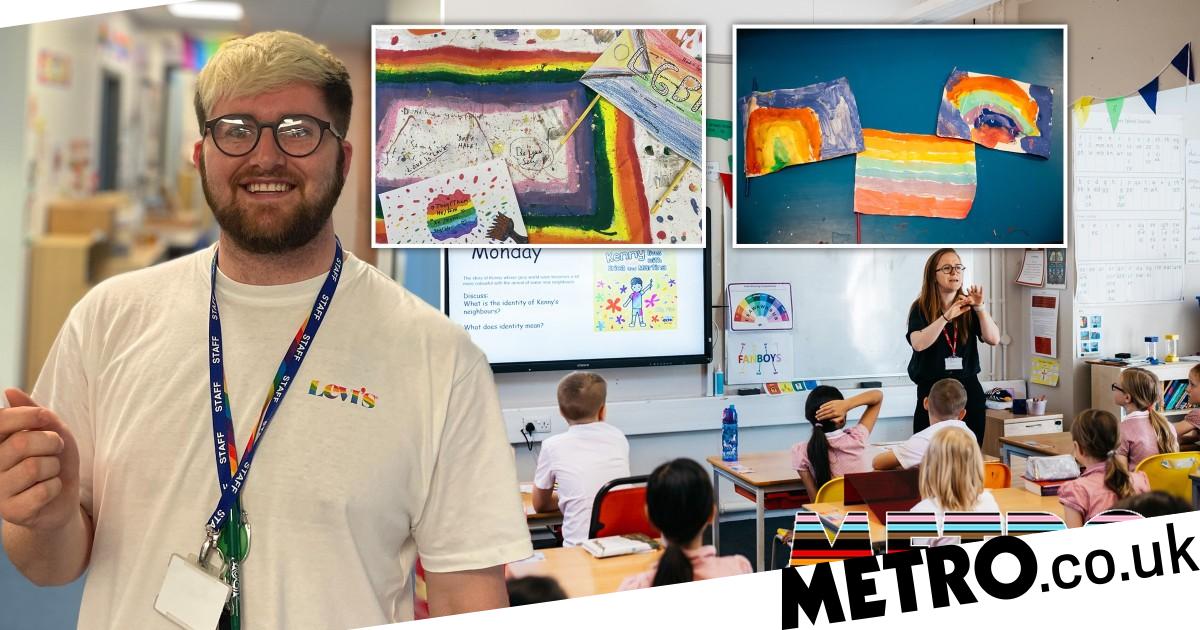 From Pride parades to popular culture, there is a good chance children have been exposed to LGBTQ+ culture and have a million questions about it.

This is why it is surprising a third of UK parents have never spoken to youngsters about what the terms lesbian, gay, bisexual and transgender mean – and 10% say they never would.

According to a new survey by Just Like Us, the LGBTQ+ young people’s charity, only 19% have had a conversation about what the acronym means only after their child asked them.

Jodie Lancet-Grant, 41, is a children’s books author working to bridge that gap.

Her second book The Pirate Mum, which came out in 2021, became the first to be read on CBeebies Bedtime Stories that features two mums.

As a mum of two twin daughters, she wanted to write literature that reflects her own relationship with her wife to ‘further the mission of inclusivity’.

‘For my girls, it is very different as they have grown up with two mums,’ she told Metro.co.uk.

‘In my experience, the vast majority of people in the UK are not homophobic at all.

‘But because there is so little representation of LGBTQ+ life, especially in children’s spaces, there will be a lot of them who have never come across such types of relationships.

‘I remember taking the children to a playdate when they were in nursery school.

‘They were playing a game of family and the girl whose house we were at wanted to be the mummy.

‘One of my daughters said that she wants to be the other mummy and the girl was like, “What, there is not another mummy,” so my daughter got a little upset by that.

‘It was not that that little child was homophobic, it was just that she had never come across such relationships before.’

The survey from Just Like Us of 1,001 parents comes as thousands of schools across the UK celebrate School Diversity Week, where young people learn about diverse families and tackling bullying.

During the week-long event, students have the opportunity to take part in various activities, including Rainbow Friday dress-up day, and ask questions about LGBTQ+ culture they might be apprehensive about asking at home.

According to their research, dads are less likely than mums to have a conversation with their child about what the abbreviation means.

For Jodie’s daughters, their education has started at an early age.

‘What I have just started doing recently, is to bring in the idea that some people might be homophobic and disagree with our family,’ she explained.

‘I am Jewish, so this is quite similar as to how I would approach antisemitism with them.

‘This is something I held off doing because obviously there is nothing wrong with our family, we are incredibly happy. Our children are very loved. But they are both seven now and I feel like time has come.’

Jodie hopes her books, which feature two mums and two dads, could serve as a tool to parents to help have such conversations early on in their child’s life.

Only 23% of parents said they have had a conversation with their child because someone in their family or social circle is LGBTQ+.

And almost half (40%) of parents said they have had a conversation with their child about it because ‘I want my child to be inclusive to all’.

The overwhelming majority (82%) believe that is it ‘important’ for their children to ‘learn that different types of families exist’.

However, only 34% of parents said there is enough support and resources for parents from schools about educating their children on LGBTQ+ topics.

After starting work there in January this year, he has been very open with students about his sexuality and everyone knows he is gay.

With his work, Cameron is trying to right the wrongs of previous generations who got LGBTQ+ education ‘massively wrong’.

Margaret Thatcher’s controversial Section 28 – which prohibited the ‘promotion of homosexuality’ by local authorities – was repealed in 2003, when he was in primary school.

‘The negative impact from Section 28 was major when I was at school, which is why I am so passionate about being open with the kids,’ he said.

‘They know I am gay and that I fall in love with men. It is about being open and giving children positive role models at school.

‘When I think back, I did not have any. This past generation really failed when it comes to the mental health of queer people.’

This is the first School Diversity Week in West Cornforth and Cameron has already heard several students say ‘I have a gay uncle’ or ‘I have two aunties who are married’.

He added: ‘Children are definitely being exposed to LGBTQ+ couples at home much more. They have a lot of questions.

‘With 10 or 11-year-olds, you can already see they are starting to express their gender identity and sexuality.

‘We have a few students who are non-binary and bisexual, so I think it is really important that we have weeks like this.

‘There are families in which LGBTQ+ issues are not discussed or who have negative views on them, so we have to discuss it at the foundation stage.’

Cameron has already seen some youngsters being apprehensive about taking queer art back home.

He also heard a few students use the word ‘gay’ as a derogatory term, which he said is ‘learnt behaviour’.

West Cornforth has a zero tolerance policy towards any homophobia or racism, so Cameron made it his mission to have an ‘open and frank’ conversation with the pupils about it.

‘Children that use such language have no understanding as to why it is wrong, which is why we speak very openly about it at school,’ he said.

‘I explained to them how it can make other people feel. It’s about having open and frank conversations.’

West Cornforth is having its own Pride event tomorrow, which will be a non-uniform day, as part of School Diversity Week.

Children are being encouraged to come dressed however they want to express themselves, and Cameron said quite a few of them will get crafty and make their own Pride T-shirts.

This year marks 50 years of Pride, so it seems only fitting that Metro.co.uk goes above and beyond in our ongoing LGBTQ+ support, through a wealth of content that not only celebrates all things Pride, but also share stories, take time to reflect and raises awareness for the community this Pride Month.

And we’ve got some great names on board to help us, too. From a list of famous guest editors taking over the site for a week that includes Rob Rinder, Nicola Adams, Peter Tatchell, Kimberly Hart-Simpson, John Whaite, Anna Richardson and Dr Ranj, we’ll also have the likes Sir Ian McKellen and Drag Race stars The Vivienne, Lawrence Chaney and Tia Kofi offering their insights.

During Pride Month, which runs from 1 – 30 June, Metro.co.uk will also be supporting Kyiv Pride, a Ukrainian charity forced to work harder than ever to protect the rights of the LGBTQ+ community during times of conflict, and youth homelessness charity AKT. To find out more about their work, and what you can do to support them, click here.