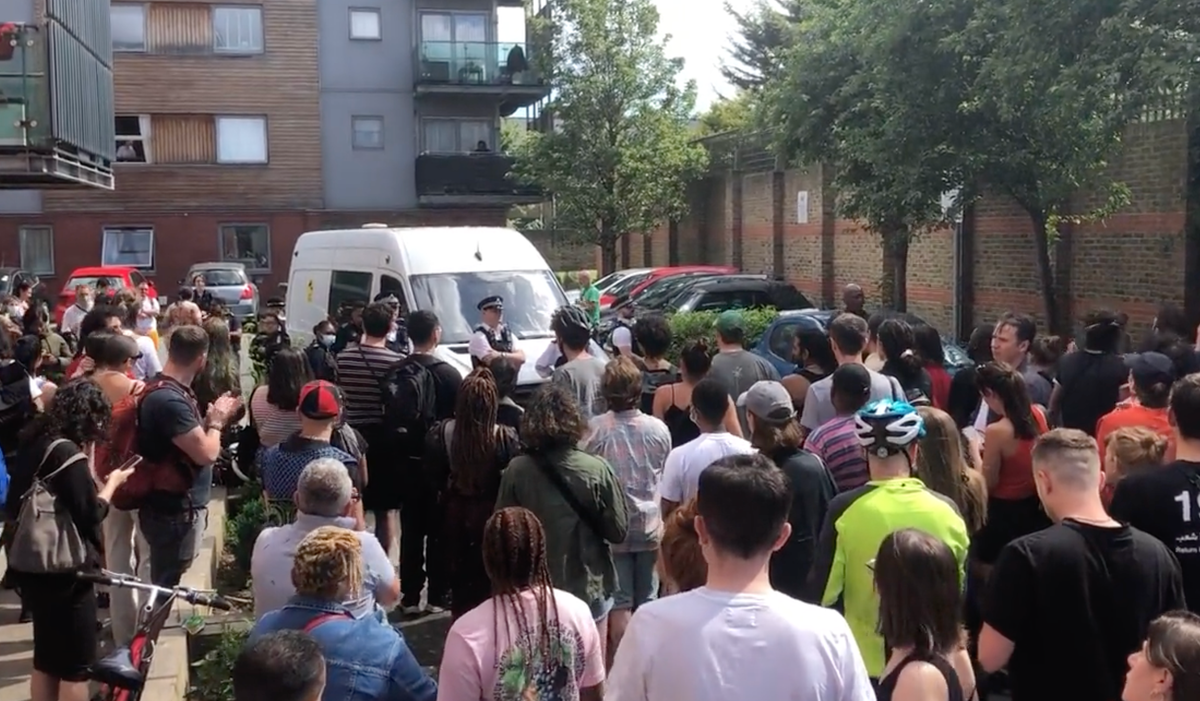 A man accused of immigration offences was released by police after hundreds of campaigners chanting “let him go” blocked a van he was in.

Protesters took to the streets in Peckham, southeast London, on Saturday afternoon to prevent immigration officers from driving the man away.

Footage posted on social media showed a crowd of people sitting on the ground in front of the vehicle amid chants of “let him go”.

In another video, police officers and campaigners appeared to get into a confrontation as other protesters chanted “no need for violence”.

Reginald Popoola, a Labour councillor for Nun Head and Queen’s Road, said on Twitter: “Police immigration raid in our ward NOW. I’m here with over 100 others. Block the van from taking one of our neighbours – come and join us now on Evan Cook Close SE15!”

It is estimated that more than 200 people attended the impromptu protest that ended with the man being released from custody, to the delight of the crowd.

Mr Popoola said: “Thank you to everyone who came down at such short notice. Southwark shouldn’t tolerate illegal raids. Together, we can win!”

Eleanor Janega, 39, from southeast London, said: “We were alerted that there was an immigration raid in process so locals came down to block it.

“We had been sitting here blocking the van and having ice lollies. They brought more police in and tried to break through the crowd by pushing us. We all sat down.”

Videos posted online showed the crowd cheering and chanting “shame on you” as officers left the scene.

A Met Police spokesperson confirmed a man arrested on suspicion of immigration offences had been released from the van and is currently on bail.

In a statement, the force said: “Police were called to Evan Cook Close, SE15, on Saturday, 11 June, shortly after 1.30pm to a report of protesters obstructing immigration officers.

“Officers attended and found a van was being prevented from leaving the location. One man has been arrested by Border Force officers on suspicion of immigration offences. Officers remain at the scene.”

The policy has moved one step closer after a High Court judge rejected campaigners’ bid for an injunction to stop the first flight out of the country, which is scheduled for Tuesday.

Brexit: Keir Starmer insists he is not ‘advocating status quo’ as he rules out return to single market