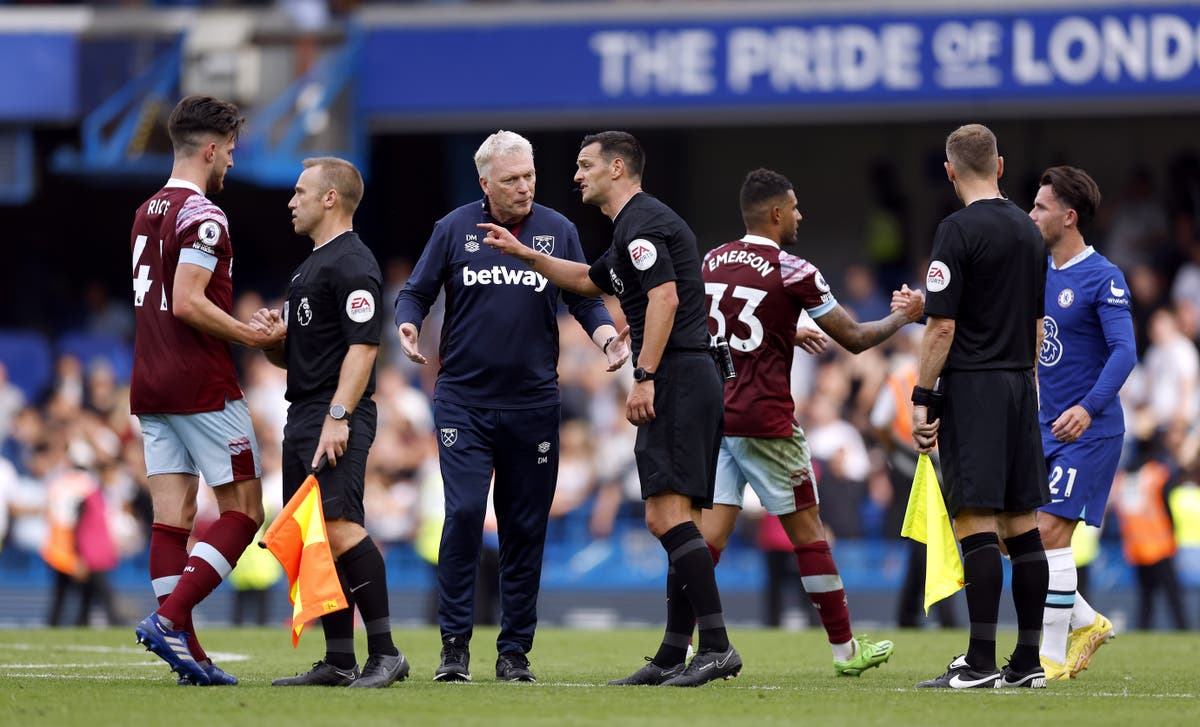 Referees are being “hung out to dry” over a series of high-profile VAR controversies in the Premier League this weekend due to a lack of leadership, according to former top-flight referees’ boss Keith Hackett.

Professional Game Match Officials Limited (PGMOL) has acknowledged errors were made in those matches and is understood to be co-operating with the Premier League after it called for the incidents to be reviewed.

Hackett, a former general manager of PGMOL, criticised current incumbent Mike Riley, who will be succeeded before the end of the year by 2010 World Cup final referee Howard Webb.

“We’re in our fourth season of VAR and we’re not operating it well,” Hackett told the PA news agency. “These officials don’t get to the Premier League without being good referees. In some ways they have been made to look foolish this weekend by what has happened. They must feel that they’ve been let down.

“They have been hung out to dry because there’s no leadership. There’s no guidance, there’s no coaching. That ultimately has to come down to the person running the organisation (Riley). The interaction between the referee and the VAR is suspect.

“One of the reasons for that is you’ve got current referees who might referee on a Saturday suddenly becoming a VAR on a Sunday. I don’t think that’s conducive to good officiating.”

Hackett says PGMOL should move to create a panel of individuals whose sole job is to serve as VARs and called for them to operate as teams with a referee and his or her assistants to improve communication.

He also believes VARs should be situated within the stadium, or very close by, rather than at the Stockley Park headquarters, which he likened to an “ivory tower”.

Newcastle were denied a winner against Crystal Palace after VAR Lee Mason recommended a check by Michael Salisbury on a collision between the Magpies’ Joe Willock and Palace goalkeeper Vicente Guaita.

A foul was given, even though replays suggested the collision was caused by Palace’s Tyrick Mitchell shoving Willock towards Guaita.

Hackett said officials are “conditioned” to change their mind if a VAR suggests they should review an incident.

“They see the walk from (making) the decision to the pitchside monitor as the walk of shame,” he added. “We need to get them in a room and say ‘guys, ultimately what we want is the correct decision. Have the courage of your convictions, because you will be supported either way’.

He also felt VAR was being used too forensically, rather than just for clear and obvious errors.

“The PGMOL said at the beginning of the season that they had raised the bar (for interventions). They have clearly forgotten to tell the VAR operators,” he said.

The referee and VAR appointments for the coming weekend’s matches will be made at 4pm on Monday, and there will naturally be close attention paid to how, or even if, the likes of Mason and Gillett feature.

Asked if the officials involved should face consequences, Hackett added: “They need operational advice. They need to understand this error. Everybody needs to understand why that error was made. It’s not about putting a guy up to a post and saying ‘we’re gonna shoot you’.

“This is about education, this is about accountability. It’s about saying ‘let’s take time out’ – maybe a week off for that individual to get his head around the error that he’s made.”

Meanwhile, the English Football League is “incredibly frustrated” by the failure of goal-line technology during Sunday’s Sky Bet Championship match between Huddersfield and Blackpool.

The Terriers were denied an equaliser when Yuta Nakayama’s effort crossed the line, but GLT failed to detect it and the on-field officials did not spot it either.

The EFL said the incident “overshadowed” a fantastic weekend of action and that GLT “failing in such a manner…is a matter of great concern”.