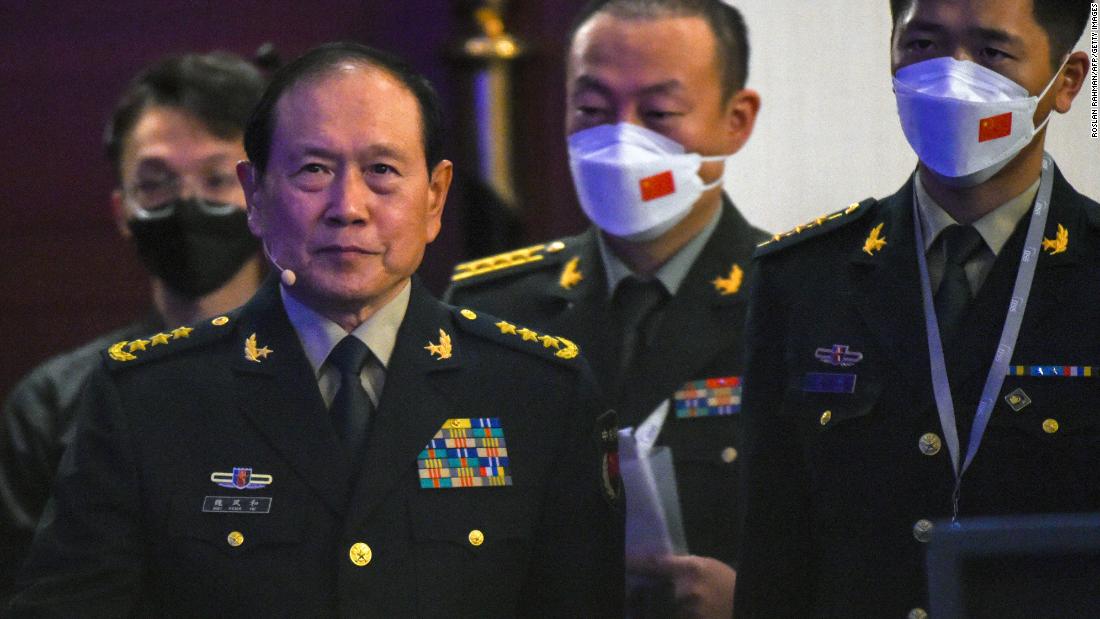 “Taiwan is first and foremost China’s Taiwan,” Wei told the Shangri-La Dialogue, Asia’s premier defense conference, adding that China would “not hesitate” to crush any attempt by the self-governed island to “secede.”

The speech — which came just weeks after US President Joe Biden said the US would respond “militarily” if China attacked Taiwan — capped a weekend of confrontational exchanges between the American and Chinese military chiefs.
Wei also called out US Defense Secretary Lloyd Austin, who had told the conference a day earlier that China was engaged in coercive, aggressive and dangerous actions that threatened to “undermine security, stability and prosperity in the Indo-Pacific.”

Austin had also talked about US coalition-building in the region and its joint military exercises with Japan, Australia, India and Indonesia, but Wei said this was a kind of “power politics” that China rejected.

“No one and no country should impose its will on others, or bully others under the guise of multilateralism,” Wei said.

“We notice Secretary Austin’s remarks on the US Indo-Pacific strategy. To us, the strategy is an attempt to build an exclusive, small group in the name of a free and open Indo-Pacific, to hijack countries in our region and target one specific country. It is a strategy to create conflict,” Wei said.

“Fight to the very end”

But Wei — who met Austin in a bilateral meeting on Friday afternoon — reserved some of his harshest criticisms for Washington’s stance on Taiwan, the democratically governed island that Beijing considers its territory despite never having ruled it.

Austin had on Friday said the US would continue to support Taiwan with the means to defend itself, including arms sales which China sees as a violation of its sovereignty.

Under US policy, Washington provides Taiwan defensive weapons, but has remained intentionally ambiguous on whether it would intervene militarily in the event of a Chinese attack — a policy that the White House insists remains intact despite Biden’s recent comments that appeared to deviate from the ambiguity. Washington acknowledges China’s position that Taiwan is part of China, but has never officially recognized Beijing’s claim to the self-governing island.
Wei said there would be no compromise on China’s sovereignty or the question of whether Taiwan will one day be “reunited” with the mainland — a clear goal of China’s ruling Communist Party, which calls for peaceful “reunification” but has not ruled out using force.

“China will definitely realize its reunification. … It is a historical trend that no one, no force can stop,” Wei said.

And the People’s Liberation Army was prepared to spill blood to enforce that if necessary, he said.

“Let me make this clear,” Wei said. “If anyone dares to secede Taiwan from China, we will not hesitate to fight. We will fight at all costs. And we will fight to the very end.”

The Chinese defense minister said the road the US is taking in the region is one his country would never go down.

“The order of human civilization must be based on the rule of law. Otherwise, the law of the jungle will prevail,” Wei said.

“China will never seek hegemony or engage in military expansion or an arms race. We do not bully others, but we will not allow others to bully us,” he said.

China has faced a barrage of criticism during the Shangri-La conference.

Delegates from US allies like Australia and Canada have been critical of what they see as Beijing’s violation of international laws, including what they claim are dangerous intercepts of their aircraft operating in the region.

Without mentioning China by name, Japanese Prime Minister Fumio Kishida said Friday that the Asian security situation is prompting Tokyo to substantially increase its defense budget and consider acquiring “counterstrike weapons,” of the type not now in its arsenal.

Japanese forces and Australian forces, among other US allies and partners, have been operating in the South China Sea, almost all of which China claims as its sovereign territory.

But Wei inferred that it was the US that was muscling in by sending naval ships into the waterway.

“Some big power has long practiced navigation hegemony on the pretext of freedom of navigation,” Wei said.

He said the US and China are at a critical juncture in their relationship, but contended the ball is in Washington’s court when it comes to diffusing tensions.

“It will be a historic and strategic mistake to insist on taking China as a threat and of an adversary or even an enemy,” he said.

If Washington can treat Beijing with “mutual respect,” there is room for both nations to prosper, Wei contended.

But he had a stern warning if the United States chose otherwise.

“If you want to cooperate, we should promote mutual benefits and win-win results. However, if you want confrontation, we will fight to the end.”