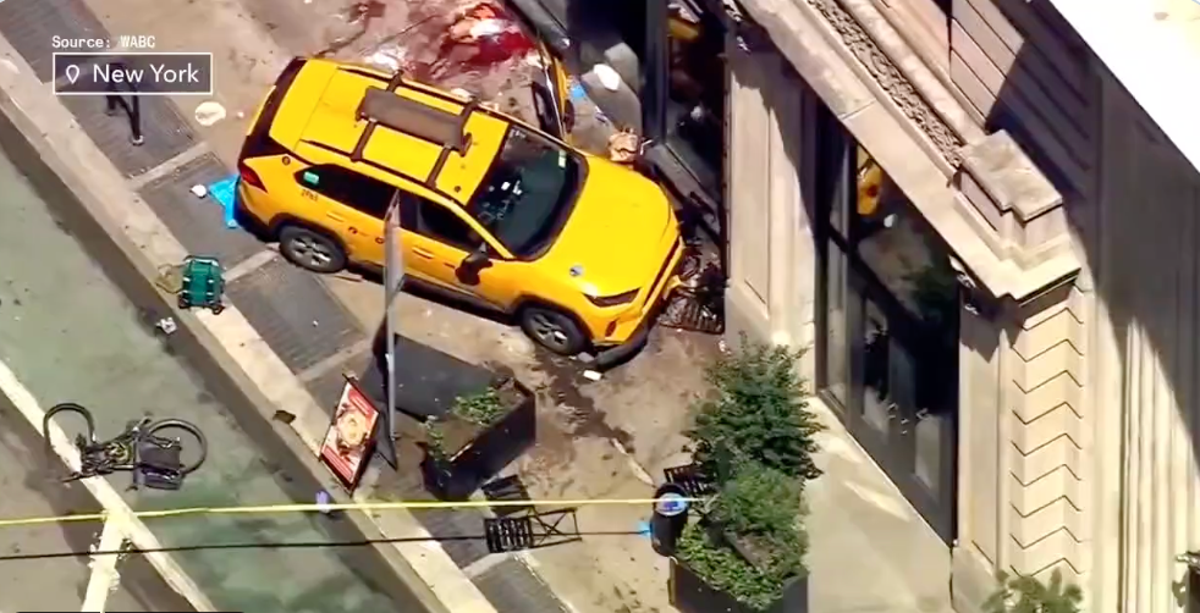 A taxicab that jumped a curb onto a busy Manhattan sidewalk and pinned two women under its wheels had reportedly racked up 18 driving violations since 2019, the New York Post first reported.

On Monday at about 1pm, taxi driver Khan Zahangir, 60, was driving on West 29th Street when he collided with a cyclist after attempting to turn onto Broadway, according to NYPD Deputy Chief John Chell.

After striking the cyclist, the driver of the Toyota RAV 4 then swerved into a group of pedestrians on a Manhattan sidewalk, located just a little more than four blocks south of the tourist-packed Herald Square and Empire State Building.

The Post reported on Wednesday that the licence plate associated with the 60-year-old man’s taxi had tallied up 18 parking and driving violations since 2019, all of which could be viewed on the website How’s My Driving NYC, an open-source platform that tracks parking and camera violations.

Since 2019, the cab had received eight school-zone speed-camera violations, two failures to stop at a red light, four bus lane violations and a handful of parking violations such as double parking and expired metres.

Though Mr Zahangir was behind the wheel during Monday’s incident, and he continues to cooperate with the investigation, the website does not include the details of who was driving the car at the time of each violation listed. The site only tracks tickets issued to the specific licence plate, not the driver.

In total, since 2019, the licence plate associated with the car has picked up $1,210 in fines, with school zone speeding violations – each of which resulted in a $50 ticket – costing the driver of the taxicab at that time $400.

On Monday, police said that three people from the incident had been left with serious injuries, while three others had suffered minor injuries.

Two of the people injured are reportedly at risk of losing one of their legs, while three of the victims were said to be in stable condition as of Wednesday morning, as per the Post.

A sixth person injured is reportedly out of the ICU, according to a person from the man’s office, the Post reported.

Initial comments from the NYPD have stated that they believe the incident was an accident, but an investigation was underway to determine exactly what happened.

“Right now, it appears to be an accident,” Mr Chell told reporters Monday, noting that accident investigators were still working to determine the cause and would be speaking with witnesses, the taxi driver and examining surveillance video.