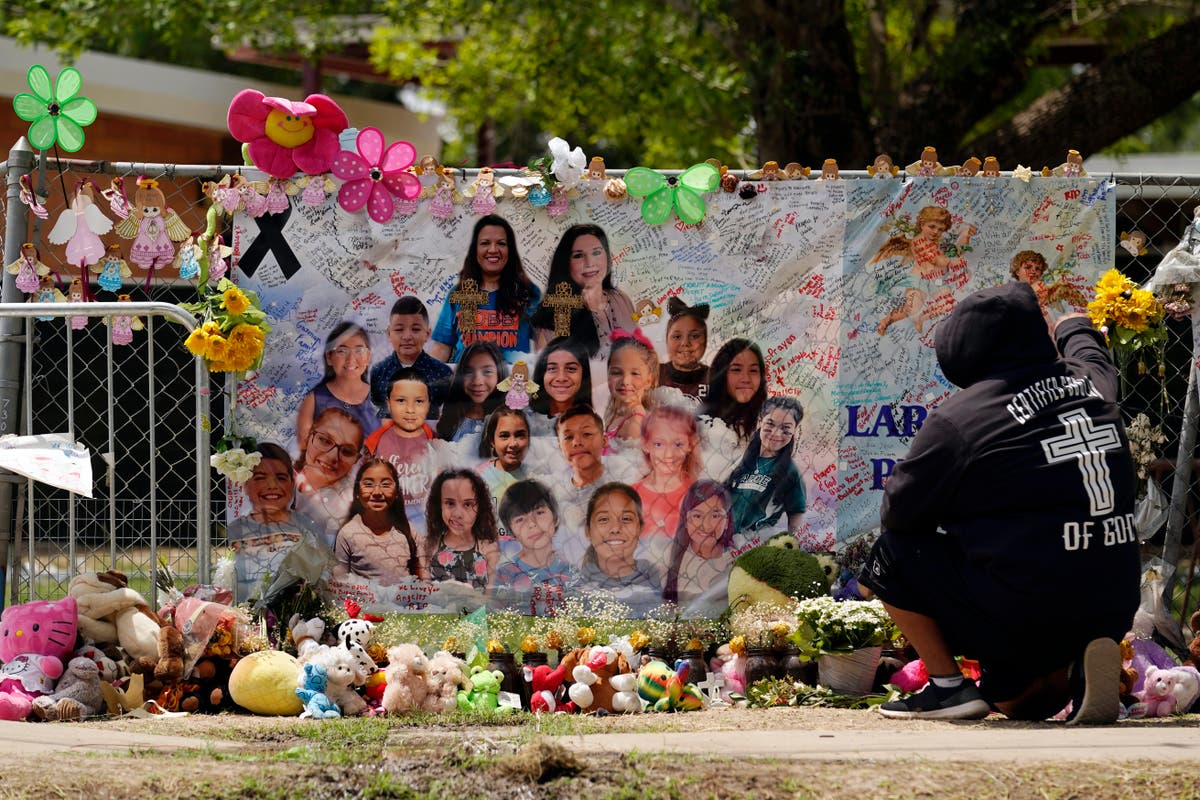 Texas mental health services put in place after the 2018 school shooting in Santa Fe still hadn’t reached Uvalde prior to last month’s shooting, lawmakers learned on Wednesday – as a teacher revealed that the gunman “scared” her and started “dressing like a school shooter” in the lead up to the attack.

He told lawmakers that the Uvalde Consolidated School District where 21 people were slaughtered last month was still not part of the Texas Child Mental Health Care Consortium more than three years on from its launch.

The consortium was set up in 2019 in response to the school shooting at Santa Fe High School to intervene when students show signs of mental health issues in order to try to prevent similar tragedies from happening in future.

On 18 May 2018, 17-year-old student Dimitrios Pagourtzis entered his high school dressed in a trench coat and t-shirt reading “Born to kill” and opened fire on his fellow students and teachers.

Eight students and two teachers were killed in the attack.

Mr Pagourtzis, now 21, is still yet to stand trial over the massacre as he has been deemed mentally unfit for trial three times and is being held at a mental health facility.

In response to the massacre, Texas state lawmakers launched the $100m mental health consortium to help identify students with mental health issues and provide them with the healthcare that they need.

And – four years on from the Santa Fe mass shooting – the telehealth service is still only available to around 40 percent of the student body in Texas.

Dr Lakey and Dr Laurel Williams, also with the consortium, testified that the rollout of the services had been a challenge because of difficulties in hiring the workforce needed.

The services had not reached Uvalde, they confirmed.

The revelation that the mental health services were not up and running in Uvalde comes after it emerged that a teacher had been “scared” of Ramos and noticed that he began “dressing like a school shooter” in the months leading up to the mass shooting.

Texas Department of Public Safety Director (TDPS) Steve McCraw testified during Tuesday’s Texas Senate hearing that the teacher told investigators Ramos “was the student who scared her the most”.

“We had one teacher who said she was always worried about him,” he said.

Mr McCraw, who is leading an investigation into the police response to the 24 May massacre, said that around 500 to 700 people in the small town of 17,000 had so far been interviewed in the month since the mass shooting.

At least six of those people spoke of concerns about Ramos’ behaviour including instances of animal cruelty, with footage of the gunman carrying a bag of dead cats had been posted online prior to the massacre.

Ramos also had a significant truancy problem, being truant on and off from the fourth grade onwards.

However, despite several people being aware of his concerning behaviour, Mr McCraw said that there was no record of any reports being made to law enforcement prior to 24 May.

Dr Lakey testified on Wednesday that “interventions” could have been made after Ramos displayed disturbing behaviour.

“Multiple times during that individual’s life there could have been intervention,” said the mental health expert.

Dr Lakey said that mental health services are “part of the solution” when such concerning student behaviour is noticed.

He said he would want to see teachers referring students displaying Ramos’ behaviour for mental health care in the early days of his concerning behaviour.

He said that, under the mental health program, intervention could have been made years ago when Ramos began playing truant in fourth grade.

“Where we want to go is when an individual is like this in fourth grade and a teacher says ‘this isn’t right, I’m seeing worrisome signals’ that they make that referral [to mental health experts through the consortium],” he said.

He added: “It is possible to reach the next person earlier before they get to that state.”

The bipartisan Texas Senate committee has been tasked by Governor Gregg Abbott to probe the events of the 24 May massacre and make legislative recommendations to the state.

On Tuesday, the Senate committee heard damning testimony from Mr McCraw who described the law enforcement response to the mass shooting as an “abject failure”.

Mr McCraw said that there was enough armed officers on the scene to stop the gunman just three minutes after the shooting began.

But, instead, law enforcement waited another one hour, 14 minutes and eight seconds – resulting in a total 77-minute delay from the start of the shooting – before a Border Patrol unit entered the classrooms and shot gunman Salvador Ramos dead.

Mr Craw placed the blame for the delayed response squarely on the shoulders of the on-site commander that day – Uvalde School District Police Chief Pete Arredondo – saying he was the “only thing” stopping officers ending the active shooting situation earlier.

“Three minutes after the subject entered the west hallway, there was sufficient number of armed officers wearing body armour, to isolate distract and neutralise the subject,” he said.

“The only thing stopping a hallway of dedicated officers from entering room 111 and 112 was the on-scene commander, who decided to place the lives of officers before the lives of children.

“The officers had training. The subject had none.”

Mr McCraw, who is leading a state investigation into the law enforcement response, said that Chief Arredondo waited for radios, firearms and keys rather than send officers into the two adjoining classrooms where dying students and teachers were waiting to be saved.

Chief Arredondo has previously said much of the delay was due to him waiting for keys to the classroom door.

This was disputed by Mr McCraw who said that the investigation so far indicates that the door was unlocked but that surveillance footage reveals not a single officer tried the door handle to see if it was open.

Even if the door was locked, law enforcement had access to a crowbar tool within minutes that could have been used to force open the door, he testified.

At a city council meeting on Tuesday night, Uvalde Mayor Don McLaughlin slammed Mr McCraw over his comments, pointing out that several DPS officers were also on the scene that day and that he was trying to direct attention away from his department.

He accused the TDPS chief of continuing to “lie, leak, mislead or misstate information” in order to distance his own department from the bungled response.

“Every briefing he leaves out the number of his own officers and Rangers that were on-scene that day,” he said.

He accused Mr McCraw of having “an agenda” which is “not to present a full report on what happened and to give factual answers to the families of this community”.

The Uvalde City Council also voted unanimously at the meeting to deny a leave of absence for Chief Arredondo as a council member, paving the way for him to potentially be ousted from the role while victims’ families are also calling on him to resign from the police department.

Families and community members are growing increasingly frustrated with what they feel is stonewalling from officials in the aftermath of the massacre.

Official accounts and timelines are increasingly changing, requests for the release of information to the public have been blocked and the staggeing 77-minute delay is believed to have cost victims’ lives.

One teacher died in an ambulance while three of the children died after reaching hospitals.

The massacre – one of the deadliest school shooting in American history – has also renewed calls for tighter gun control laws to be passed in Congress.

Late on Tuesday, the Senate moved forward with a bipartisan package of narrow gun safety measures.

The bill includes expanding background checks for people aged 18 to 21 and more money for school safety and mental health resources.

However, it does not include the ban on assault weapons that many are calling for, after high-capacity rifles were used in the recent attacks to kill multiple people.

The massacre at Uvalde came just 10 days after 10 Black people were shot dead by a self-proclaimed white supremacist in a grocery store in Buffalo, New York.

In both shootings, the 18-year-old suspects used semi-automatic rifles that they had legally purchased.

Home set on fire by illegal fireworks from nearby Fourth of July party in Richmond Hill, Queens