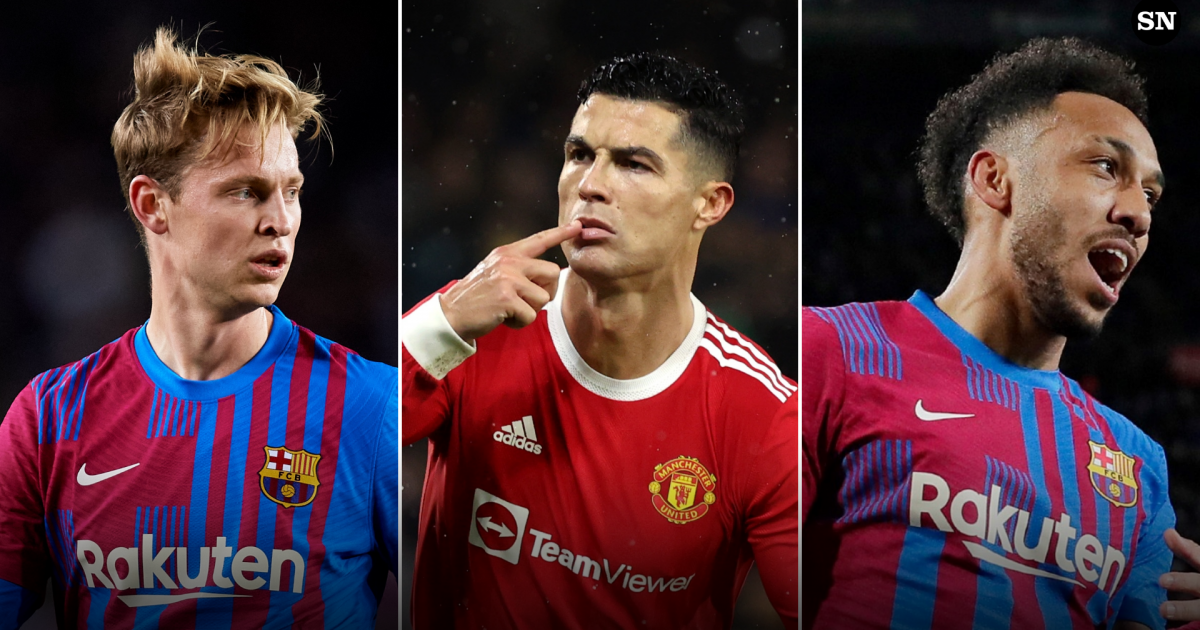 As the end of the 2022 summer transfer window nears, the heat is rising on a number of big European clubs to complete deals, both ingoing and outgoing, to balance their squads and their books.

Some massive transfers have already been completed this summer, including the arrival of Casemiro at Manchester United and his big-money replacement Aurelien Tchouameni at Real Madrid, the sale of Gabriel Jesus and Oleksandr Zinchenko from Man City to Arsenal, and Liverpool’s addition of Darwin Nunez.

The Premier League has by far been the biggest spender this summer as the English top-flight looks to assert its dominance over the rest of the European football landscape.

While many deals have been hashed out already, there are plenty still yet to be completed as the window nears a close.

The Sporting News brings you a list of the most talked-about transfers in the past few days which could take place before the transfer window shuts on September 1.

The biggest deals involve the biggest players, and nobody is a bigger name in the current football world than Cristiano Ronaldo.

His current standing at Manchester United is on rocky ground, with reports claiming Ronaldo could depart the club before the transfer window completes. However, he’ll have to find a willing party, a big ask given his big wages and even bigger personality.

There have been links to Atletico Madrid, but it’s unclear whether Diego Simeone can convince both the club executives and supporters that it’s a good idea to bring Ronaldo back to the Spanish top-flight to play for a former rival.

Latest news (Aug 17): According to a report by The Independent, Portuguese club Sporting Lisbon have reached out to Ronaldo’s representatives to indicate they would be willing to sign the forward. However, they stated they would not be able to pay a transfer fee and could only complete a deal on a free transfer.

Sporting are an intriguing player in this situation, as Ronaldo began his career in the club’s youth system, and his mom is famously a huge Sporting supporter.

The saga of Frenkie de Jong at Barcelona has dragged on all summer, with Manchester United continuing to push for the Dutch midfielder but Barcelona playing hardball the whole way.

Barcelona are in a deep financial quagmire, still unable to register new signing Jules Kounde in La Liga after two games. They need players to depart in order to both raise capital and clear space on the wage bill for Kounde plus any other potential arrivals.

De Jong seems an outcast at Barcelona, struggling in his first La Liga start against Real Sociedad on August 21 as he was deployed at the No. 6 role in place of a suspended Sergio Busquets. Yet he reportedly remains steadfast in his desire to fight for a spot at the club, even as Barcelona push legal action to revise his contract in the hopes of clearing more financial space.

Will Manchester United eventually persuade the Dutchman to sign? Will Chelsea step in and complete a coup? Or will De Jong ultimately remain at Barcelona and push for a spot in Xavi’s long-term plans? There’s still very little clarity on which way this one will end.

Latest news (Aug 22): Despite Man United signing Casemiro, the Red Devils are still pushing for a de Jong transfer. Spanish publication Sport reports that United officials are flying to Barcelona in an attempt to hash out a deal, still “hopeful” that an agreement can be reached with both club and player.

Another player Man United have chased all transfer window is Brazilian winger Antony, who plays for Ajax in the Eredivisie.

The Red Devils have reportedly had numerous bids knocked back, with the Dutch club hoping to break their own outgoing transfer fee record.

United had been linked with a more cost-friendly loan move for USMNT forward Christian Pulisic, but a report on August 22 stated that United have ended their interest in the Chelsea man to focus fully on bringing Antony to Old Trafford.

Latest news (Aug. 22): According to Sky Sports, Man United are preparing yet another improved bid for Antony, which will top the €80 million offer they say rejected previously. Antony, meanwhile, has been pulled from the Ajax squad as talks continue.

Another wide player United are reportedly targeting is Cody Gakpo of PSV. The 23-year-old was a big part of the club’s push for an Eredivisie title last season, which fell just short of Ajax in the end.

Gakpo was linked to Arsenal for much of the earlier portion of the transfer window, but lately Man United seem to have shifted into the team most interested in the Dutch international’s services. Still, they’ll have to meet PSV’s valuation for a deal to be completed, as Gakpo’s contract runs through the summer of 2026, giving the Dutch club all the leverage.

With Barcelona still mired in the financial difficulties of the last few years, striker Pierre-Emerick Aubameyang could be an expendable piece of the squad.

With Aubameyang in good form through the second half of last season, but also reaching 33 years old, Barcelona could act now in order to salvage some transfer value as well as shed his salary.

Latest news (Aug. 22): According to Sky Sports and other reports, Chelsea are in “advanced talks” to sign Aubameyang, with a deal between £15 million and £25 million close to agreement.

Another Barcelona forward who could be on the move is Memphis Depay.

The Dutchman was key through the first half of last season, providing the Blaugrana a steady presence up front as the rest of the squad faltered. As a result, Depay ended the campaign as the club’s top La Liga goalscorer.

However, he’s fallen down the pecking order since, with Aubameyang and Lewandowski now the preferred options, leaving Depay to find a new home.

Latest news (Aug. 21): Italian journalist Gianluca di Marzio reports that Juventus are pursuing a deal for Depay, and the clubs are currently hashing out the details. Di Marzio told Sky Sports Italia, passed on by Italian publication Tuttomercatoweb, that more will be known in the next few days.

The Blues are seemingly in for a number of players, including young Everton winger Anthony Gordon.

Toffees boss Frank Lampard has been open about wishing to keep the 21-year-old, but knows it may be impossible.

With Chelsea doing their best to identify attacking reinforcements, Gordon could be an option, although it would come at a high price.

Latest news (Aug. 20): According to a host of reports, Chelsea have seen a second bid for Gordon rejected, amounting to £45 million. It’s unclear whether they’ll come back with another, although it could be contingent on other deals like Aubameyang.

One player who’s been frozen out of the Barcelona squad entirely is American full-back Sergino Dest.

The 21-year-old is the only natural right-back on the roster, and Ronald Araujo has struggled to deputise out wide, but Xavi is sticking to his guns and leaving Dest out cold.

Dest was linked with Man United for a bit, but it still feels like he has work to do before the deadline to find a new club home.

Latest news (Aug. 21): According to a report by Spanish publication Sport, Barcelona are offering Dest in return as part of offers for other full-backs. However, the report also states that Dest’s representatives have informed Barcelona they will not sign off on any deal and that the player would like to stay and fight for his place. This could end up as a stand-off.

The Blues have had a number of defensive players depart the club this summer, so reinforcements are needed. Kalidou Koulibaly has joined, but more are wanted by Thomas Tuchel.

One that’s been identified is Wesley Fofana of Leicester City. The Foxes have tried desperately to keep the 21-year-old France youth international, but it feels more and more like he’ll depart the club, and for a gargantuan fee.

Latest news (Aug. 16): Reports indicate that Fofana has made his desire to depart clear to the club, and that he’s frustrated with the price point the club has asked for. The defender was left out of the squad entirely for the club’s defeat to Southampton on Matchweek 3, indicating the club may be relenting to a sale.

Another Leicester City player who could depart the King Power Stadium is midfielder Youri Tielemans.

The Belgian has developed into a force during his time with the Foxes, and top clubs have started to circle.

Arsenal are the club most linked with a move for Tielemans, and just like Fofana, he was left out of the Leicester City squad to face Southampton.

Latest news (Aug. 21): According to Belgian reporter Sacha Tavolieri, Arsenal are expected to make a new bid for Tielemans in the coming days. If that doesn’t fall through, a move for Sandro Tonali could be on the cards.

UK: Matches are carried across Sky Sports and BT Sport streaming and TV platforms, with select matches on Amazon Prime.

USA: Select matches are televised on USA Network (English) and Telemundo or Universo (Spanish), and all three channels can be streamed on fuboTV. The rest of the matches are streamed on NBC platform Peacock for subscribers.

Canada: Every Premier League game streams live and on demand exclusively via fuboTV.

Australia: Fans in Australia can stream matches live and on demand on Optus Sport.

Where will the Queen be buried as Prince Philip's body to...

Where will the Queen be buried as Prince Philip's body to...