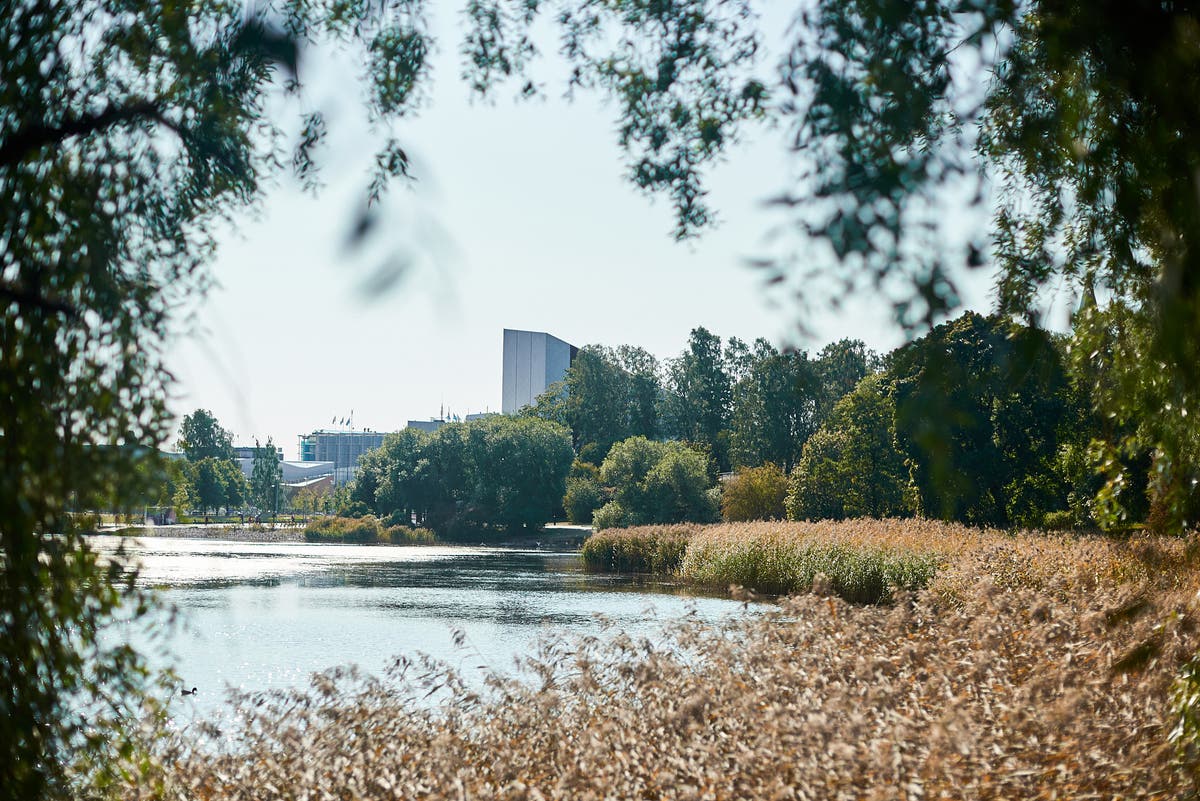 For the fifth year in a row, Finns have been officially ranked as the happiest people in the world.

For urban dwellers, the capital’s abundance of nature, space and quiet is surely a boost – from the parks and allotments that add to its 40 per cent green space, to the near-unrivalled air and water quality and unerring presence of the sea. For Helsinki is, in fact, a peninsula – embraced on three sides by a mosaic of 300 islands, 130km of coastline and 25 public beaches (with winter swimming highly encouraged) – where every resident lives within 10km of the water.

Perhaps born of this unique natural setting, Helsinki has long stood at the frontier of environmental responsibility and innovation. The city has pledged carbon neutrality by 2035, and is steadily moving towards its goal. But for all the big figures, the capital is most keenly a place of grassroots, experimental green thinking, from conscientious food sourcing to low-impact design.

The Helsinki “Think Sustainably” platform helps to direct locals and visitors alike to the city’s most sustainable features and activities, with blogs including “Tips for great breathing spots” and “Urban adventures via public transport”. Indeed, visitors may be surprised to discover how climate responsibility informs so much of the city’s day-to-day life: one only has to languish in an eco-designed sauna, settle into a zero-waste dinner, or roam among its “preloved” boutiques to discover the joy, warmth and inspiration that can stem from environmentalism.

Here’s how to make the most of a trip to this future-facing city with a focus on relishing the present.

Traditional Finnish fishing cottage meets patented off-grid technology at MajaMaja, which became an overnight phenomenon for its eco-retreat on the inner Helsinki archipelago.

Ten minutes by boat from Helsinki harbour, Majamaja is the perfect summation of the city’s radical design history and forward-looking environmental spirit. “People don’t come for just another hotel experience,” says CEO Tuomas Autio. “In the morning, you can clear everything out and create this little zen space.”

Majamaja: overnight stays from €230, sleeps one to three guests. Four new houses available for summer 2022, with a sauna coming in 2023. majamaja.com

Meanwhile, in the heart of Helsinki’s downtown Design District, “It all started from disposable bath slippers,” says Hotel St George’s head of wellbeing Linda Ekholm. The small step of introducing durable, washable alternatives (“which may not be as pretty, but last up to four times as long”), set the path of sustainability for the city’s most stylish hotel: a reimagined former printing house, complete with 300-piece contemporary art collection, glass-ceiling Wintergarden cocktail bar, and mosaic-tiled pool.

Besides its eco-certified renovation, daily efforts include reusing leftover fruit from the bar for making snacks; collaboration with the ResQ app to minimise waste from its marvellous in-house bakery; and equipping guests with SodaStream machines. If anywhere can pull off a reusable slipper, it’s the St George.

Far from being empty buzzwords, notions of seasonal, local, and no-waste cooking are deeply rooted philosophies in the Finnish capital.

“Walk the walk” has never been more apt than at Nolla, Helsinki’s first zero-waste restaurant, led by a team intent on industry reinvention. No detail has been overlooked: citrus zest is collected from local juice bars, kitchen waste is donated to “Lauri”, the dining-room composter (whose output is donated to the restaurant’s suppliers), and serving plates are made from waste clay, while water glasses are cut from bottles reclaimed from the Presidential Palace.

The surprising menu, meanwhile, reveals the majestic confluence of Nolla’s three founding chefs. Southern European meets modern Serbian, with an evolving menu that might include sourdough gnocchi with blue cheese and wild herb chimichurri, followed with buckwheat milk ice cream, carrot compote and buckwheat cake. And above all, conscience here comes with conviviality – starting with half a pint from the in-house brewery.

Other eco-oriented options in the city include the fine-dining Ora restaurant, from chef Sasu Laukkonen, whose no-exceptions Finnish ingredients have commonly travelled only a few miles to reach the kitchen. And then there’s Way Bakery, an unmissable coffee-bakery-eatery spot in the up-and-coming Kallio neighbourhood, guided by local produce and sustainability.

“Everything should be done as efficiently as possible and with as little waste as possible,” says co-owner Lauri Kahkonen. Wind your way here for a seasonal “Laskiaispulla” bun (baked throughout the day), or a generous bowl of homemade saffron tagliatelle and a glass of orange wine.

On the western side of the peninsula, and just outside Helsinki’s city centre, Toolo is green both in sensibility and appearance, from its world-famous architecture to its sporting shoreline and independent cafes. Begin your outing as the sun crests the spruce curvature of Oodi library – a space founded on environmental as much as community principles (a case in point being the library’s “Urban Workshop” of rentable services, from sewing machines to 3D printers).

From here, a short skip along the lakeside will land you at Finlandia Hall, the music venue designed by idol of Finnish architecture Alvar Aalto. Recent ecological tweaks include rooftop solar panels (accounting for 25 per cent of energy consumption in summer), and a climate-friendly coffee offering – the result of several varieties being tested for minimal biowaste.

Past the cyclists and rushes encircling Toolonlahti Bay, continue north to the lush rose gardens and greenhouses of the Winter Garden in Elaintarha Park – as much a haven for succulents as shelter for visitors seeking refuge from the Nordic climate.

Proceed to the top of Mantymaki hill for the best views of the iconic Helsinki Olympic stadium, before looping back into Etu-Toolo (meaning “Inner Toolo”), with a coffee stop at Latin-Nordic roastery Cafetoria, dedicated to equitable partnerships with its organic small-scale suppliers. Lunch can be gathered from the bountiful counter at Toolo Village Shop, or from Cafe Regatta – also the launch pad for a kayak trip on Taka-Toolo’s western shore, or a swim on Hietaranta beach.

Wind up the day with a rummage at class-above-the-rest second-hand troves Relove Lifestyle and Arkadia International Bookshop, before settling into the tranquil garden of Korjaamo Culture Factory. One of the country’s most expansive cultural centres, Korjaamo is lauded as much for its summer barbecue nights as its diverse, topical programme: none more so than the IHME Contemporary Art Festival, which promotes environmental education through art commissioning.

With its unassuming manner, slow pace and surprising edge, Toolo is a capsule of Finnish culture at its best.

Deserving of a category all of its own, the tradition of public sauna is one that completes a visit to the city, and is rapidly on the rise again, with a coterie of new spaces. Architect-artist duo Tuomas Toivonen and Nene Tsuboi’s ecologically designed Kulttuurisauna quickly became a local favourite when it opened in 2017, with operatic chants serenading those in the sunrise-facing sauna rooms, while a simple Japanese-Finnish menu is served.

At the southern tip of the city, the striking geometry of Loyly combines a classic Finnish smoke sauna with two wood-heated saunas, while their expansive rooftop terrace descends into the sea – for the obligatory sauna-to-sea ritual.

And to soak up the city’s unique archipelago setting, hop across to jewel-sized Lonna island, only 10 minutes by boat from Helsinki’s harbour market. With views over the Baltic Sea, an elegant wood-fuelled sauna and deckchaired terrace awaits – primed for sipping cans of classic Finnish lonkero, a refreshing gin-grapefruit mix. While on the island, don’t miss Lonna’s restaurant, especially its in-house “archipelago” bread (Saaristolaisleipa), an irresistible rye-molasses loaf, paired with smoked fish.

Between the boutiques of the Design District, the second-hand fashion stores of Kallio, and the myriad stalls of Hietalahti flea market (known among locals as Hietsu), the city brims with responsible shopping options.

For foodie souvenirs, make a beeline to Anton&Anton deli for its hand-picked selection of organic, local produce. Or, for the best of the museum’s shops, carve out time after a prescribed visit to the spectacular Amos Rex for inspiration from new arts titles, hand-cast coconut candles, or irresistible patchwork items from Jouten clothing, made from 100 per cent recycled textiles, such as repurposed hotel towels and bed linen.

Travellers can reach Helsinki from London by catching a Eurostar to Paris and an onward train to Hamburg, followed by a train to Stockholm. From there, a regular ferry service runs to Helsinki.

Norwegian, Finnair and Ryanair all fly direct from the UK to Helsinki.

British Airways summer cancellations: All you need to know