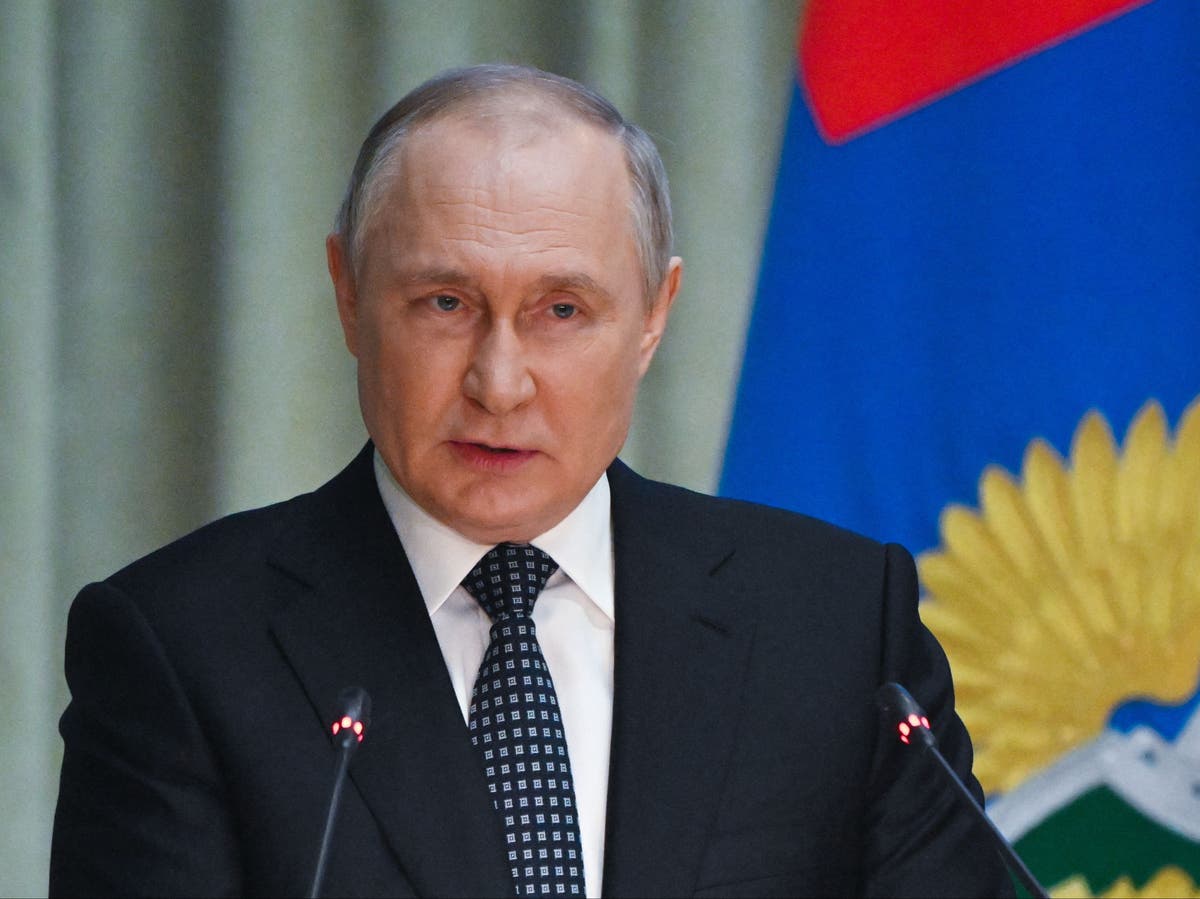 Vladimir Putin has lashed out at western sanctions against Russia over its war in Ukraine, calling them “mad and thoughtless” and an “economic blitzkrieg”.

But the Russian president claimed they were “more harmful” to those imposing them.

Many western countries have imposed restrictions on Russia to punish the nation for its war on Ukraine.

In other news, Boris Johnson has offered Ukraine a major armed forces training operation he believes could “change the equation” against the Russian invasion during a surprise visit to Kyiv.

In talks with Ukrainian president Volodymyr Zelensky, the prime minister said the UK could train up to 10,000 troops every 120 days.

“My visit today, in the depths of this war, is to send a clear and simple message to the Ukrainian people: the UK is with you, and we will be with you until you ultimately prevail,” Mr Johnson said in a statement.

Shelling has trapped 77 miners in a coal mine in the Donetsk region of eastern Ukraine after power to the mine was cut off, according to Russia’s state RIA news agency.

What is the latest?

Here is a quick look at the latest developments in the war:

Aisha Rimi reported at the time:

Russian president Vladimir Putin has condemned the sanctions placed on it by western countries in the wake of Moscow’s invasion of Ukraine, Peony Hirwani reports.

“The economic blitzkrieg against Russia had no chance of succeeding from the very beginning,” he told a forum in St Petersburg on Friday, adding that the sanctions were “more harmful” to those who imposed them.

Boris Johnson has offered battle training for tens of thousands of Ukrainian troops during an unannounced visit to Kyiv for talks with president Volodymyr Zelensky, Andrew Woodcock reports.

The UK PM aid that a UK-led programme using British Army expertise could train as many as 10,000 Ukrainian service personnel every 120 days.

He said this could “change the equation” in what has become a drawn-out war of attrition against Russian invaders.

David Beasley, the director of the UN World Food Programme, has warned the world of “frightening” food shortages that could destabilise countries that depend on wheat exports from Ukraine and Russia.

“Even before the Ukraine crisis, we were facing an unprecedented global food crisis because of Covid and fuel price increases,” Mr Beasley said in Ethiopia’s capital Addis Ababa. “Then, we thought it couldn’t get any worse, but this war has been devastating.”

Somalia relies on Ukraine and Russia for all of its wheat imports, while Egypt gets 80 per cent of its grain from the two countries.

Russian billionaire Alexander Abramov has launched legal action against Australia’s minister for foreign affairs, asking to be removed from the list of people the government has hit with sanctions over his country’s invasion of Ukraine.

His lawyer, Stewart Levitt, told The Guardian that his client “doesn’t satisfy the definition of a person who should be on the sanctions list”.

“It is not inappropriate to have sanctions against people who further the interests of the Russian government, but we say that Mr Abramov is not in the category of a person who has the requisite influence. He is a businessman, a successful businessman, but he is not a person who should be targeted [by sanctions],” Mr Levitt said.

“The economic blitzkrieg against Russia had no chance of succeeding from the very beginning,” he said at a forum in St Petersburg, adding that the restrictions were “more harmful” to those who imposed them.

Pointing out numbers, Mr Putin said that the EU could lose more than $400bn (£326bn) because of its sanctions against Russia.

He added that inflation was increasing across all European countries and the real interests of people in the area were being sidelined.

What are the steps Ukraine has to take to join the EU?

Ukraine applied to join the EU four days after the Russian invasion in February 2022.

While nations have been supportive of Ukraine, unanimous agreement is needed for the European commission’s recommendation to be taken up.

Portugal and the Netherlands are among the member states who have expressed some tentative misgivings about the granting of candidate status, given the length of the process and the potential that it could give rise to unrealistic expectations in Kyiv.

Although, if the 27 nations all agree, which in itself could take plenty of discussions, the process would then require the formal opening of accession talks.

Support for Ukrainians ‘signals change in views on refugees’

An outpouring of public support across Europe for millions of people fleeing war in Ukraine may point to a shift in attitudes towards refugees as the number of those displaced by conflict or persecution globally has surpassed 100 million, the UNHCR said.

“We are seeing this compassion globally for the situation in Ukraine because it is so horrific,” she said. “We are starting to see the burden being passed on to local and national governments.”

The experience of helping people fleeing Ukraine should help Europeans prepare for a rise in the number of those leaving home because of climate change in the future, she said.