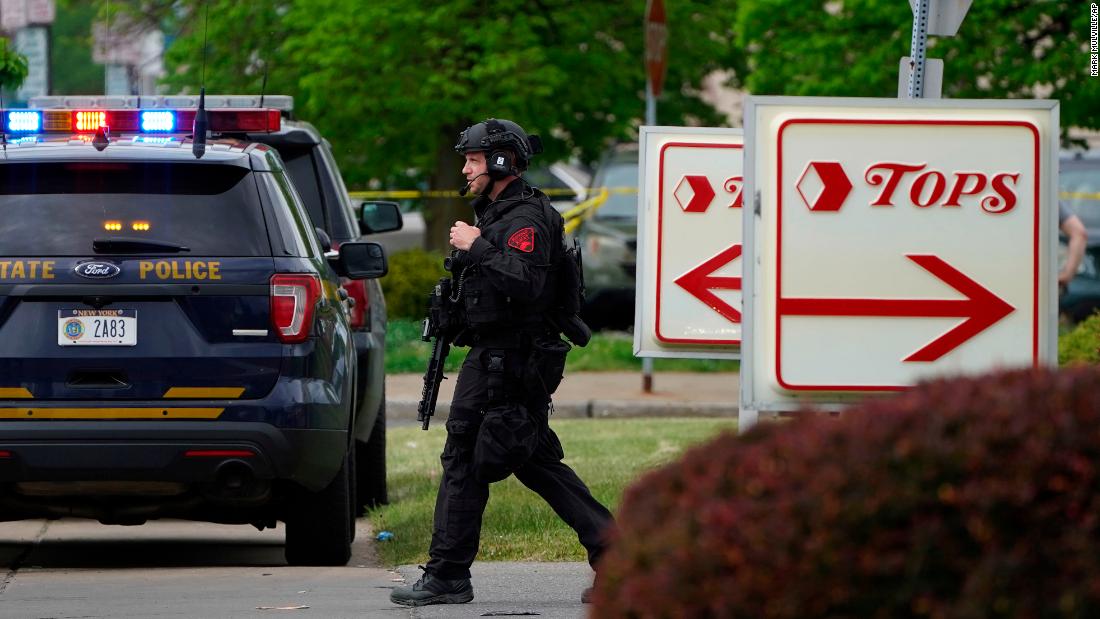 The FBI is investigating the shooting as both a hate crime and a case of racially motivated violent extremism, said Stephen Belongia, FBI special agent in charge of the Buffalo field office.

Here’s what we know about the shooting and the investigation.

How the shooting unfolded

When the suspect arrived at the Tops Friendly Markets supermarket on Jefferson Avenue about 2:30 p.m. Saturday, he was “very heavily armed,” according to Buffalo Police Commissioner Joseph Gramaglia.

“He had tactical gear, he had a tactical helmet on, he had a camera that he was livestreaming what he was doing.”

The suspect first opened fire in the store’s parking lot, per authorities, shooting four people. Three of those people died while another is expected to survive, Gramaglia said.

The suspect shot and killed the security guard and continued working his way through the store, the commissioner said. When police arrived, the suspect put his gun to his neck but later dropped the gun and took off some of his gear, he added.

He surrendered and was transported to Buffalo police headquarters.

Warrants are being obtained for suspect’s home, vehicle, social media platforms, computer, telephone, and any other digital technologies, Gramaglia said. The investigation shows Gendron acted on his own in the shooting, he added.

What we know about the victims

Of the 13 people shot, 11 are African American and two are White, said Gramaglia.

Four were store employees, he said. Three suffered “nonfatal wounds,” he said. The fourth, security guard Aaron Salter, a retired Buffalo police lieutenant, was killed as he tried to stop the suspect. Mayor Byron Brown called him a “hero, who tried to protect people in the store, tried to save lives, and in the process, lost his own life.”

Police identified the victims, ranging in age from 20 to 85, late Sunday.

Among them was 62-year-old Geraldine Talley, who was shopping with her fiancé when gunfire erupted, her niece Lakesha Chapman told CNN. Talley was at the front of the store, Chapman said, but her fiancé had gone to get orange juice. He escaped unharmed.

Chapman’s “Auntie Gerri” was always “the life of the party,” she said. “She was just a lover. I mean she didn’t meet a stranger, and that’s why this hurts so much,” said Chapman.

Heyward Patterson, a 67-year-old taxi driver, was waiting for passengers outside the supermarket when he was gunned down, according to his nephew, Terrell Clark.

Patterson — who loved to tell jokes and sing at church — “took pride in helping people,” Clark said. “And if the person had little or no money, he would still give them a ride. He had a big heart.”

Livestreaming platform Twitch confirmed Saturday the suspect used its platform to stream a live broadcast during the attack, saying in a statement the video was removed less than two minutes after the violence began.

CNN obtained a portion of the livestream showing the alleged shooter pulling up to a Tops store.

The video is recorded from the point of view of the alleged shooter as he is driving into the supermarket’s parking lot. The person is seen in the rearview mirror wearing a helmet and is heard saying, “Just got to go for it,” before he pulls into the front of the store.

In the video, store patrons can be seen walking through the parking lot as the suspect drives up.

The company was “devastated” to hear about the shooting, it said, and the user “has been indefinitely suspended from our service, and we are taking all appropriate action, including monitoring for any accounts rebroadcasting this content.”

Authorities at the state, local and federal level continue to investigate the shooting and motive, but they have already said they believe it was racially motivated.

“The evidence that we have uncovered so far makes no mistake that this is an absolute racist hate crime. It will be prosecuted as a hate crime,” Gramaglia said. “This is someone who has hate in their heart, soul and mind.”

Garcia, the Erie County sheriff, similarly said the shooting was a “straight up racially motivated hate crime from somebody outside of our community,” describing it as “pure evil.”

One piece of evidence may be a 180-page document purportedly written by the suspect and posted online before the shooting. The document, independently obtained by CNN shortly after the massacre and before authorities released the name of the suspect, is allegedly written by a person claiming to be Payton Gendron confessing to the attack.

The author attributes the internet for most of his beliefs, describes himself as a fascist, a white supremacist and an anti-Semite.

The suspect allegedly says he bought ammunition for some time but did not get serious about planning the attack until January. The author also writes about his perceptions of the dwindling size of the white population and claims of ethnic and cultural replacement of whites.

Alongside tirades about his false belief that White Americans were being “replaced” by people of other races, the document included pages upon pages listing the equipment and clothing he planned to wear, from military-style body armor down to the brand of his underwear.

The document also included a minute-by-minute outline of the suspect’s plan. The author drew a color-coded map of the interior of the store, laying out how he planned to “shoot all black people.” It’s unclear how closely the gunman’s attack followed the plan listed in the document.

When asked during Saturday’s news conference about why authorities are calling the mass shooting a hate crime, Flynn, the district attorney, said investigators have “certain pieces of evidence” that “indicate some racial animosity.”

Sheriff Garcia told CNN on Monday the suspect was visited last year by New York State Police after he did a high school project about murder-suicides.

According to Garcia, concerns about alleged mental health issues “were brought to light” after he turned in the post-graduation project.

“The state police arrived at his house at that point last year,” Garcia said. “He stayed at a facility — I’m not sure if it was a hospital or a mental health facility — for a day and a half.”

Gramaglia said that Gendron is believed to have visited the area in early March. Officials previously said the suspect arrived in Buffalo on Friday for the first time to scout out the Tops Friendly Markets store. However, Gramaglia updated that timeline based on what he described as the suspect’s “digital footprint.”

The suspect planned to continue his shooting rampage beyond the supermarket, Gramaglia told CNN, saying there was “some documentation” he allegedly planned to target “another large superstore.”

Officials say the suspect visited the Buffalo supermarket in March and then again on Friday to gather information.

Writings posted to social media by Gendron and analyzed by CNN reveal that the suspect visited Tops Friendly Market in early March and spent months extensively planning his attack.

The posts were originally posted to Discord and were later shared on the hate-filled online forum 4Chan.

According to his posts, Gendron drove from his home to the Buffalo supermarket on Tuesday, March 8.

Gendron writes that he went into the Tops Market three times — at 12 p.m., 2 p.m. and again at 4 p.m — and each time he details what is happening in the market. He notes how many Black and White people are present and provides a hand-drawn map of the market with marked aisles and exit points.

During his last visit to the supermarket at 4 p.m., Gendron says he is approached by a “Black armed security guard” who asked him what he is doing going in and out of the store. The suspect says he told the security guard that he was collecting “consensus data,” for which the security guard said he needed to talk to the manager.

“I asked for his name and he told me and I instantly forgot, then I said bye and thanks and walked back to my car,” Gendron writes. “In hindsight that was a close call.”

In a post on March 10, Gendron writes, “I’m going to have to kill that security guard at Tops I hope he doesn’t kill me or even hurt me instantly.”

The shooter writes that he planned his attack for March 15 but then delays the date several times.

Gendron cites online research in choosing Buffalo as his site of attack, saying that the 14208 zip code in Buffalo has a higher Black population than the other locations he was considering. He also says he considered attacking a church or an elementary school, but chose the market because of how many people frequent grocery stores.

He refers to the Google popular times graph for Tops Friendly Market in determining the time of his attack when the store would be the busiest.

Suspect was radicalized by message boards

In the document, the suspect allegedly detailed how he had been radicalized by reading online message boards, while describing the attack as terrorism and himself as a White supremacist.

He wrote he had “moved farther to the right” politically over the last three years.

The suspect started browsing the message board 4chan — a hotbed for racist, sexist and White nationalist content — in May 2020 “after extreme boredom” during the early days of the coronavirus pandemic, according to the document. Posts he had read on the site made him believe “the White race is dying out,” among other racist beliefs, and led him down a rabbit hole to other extremist websites, the document states.
The conspiracy theory of a “great replacement” has been a motivator of other violent attacks, experts in extremism have said. Some forms of the theory have more recently gone mainstream in conservative news outlets and politicians.
One day while browsing 4chan, the suspect allegedly saw a video clip of the gunman who killed 51 people in New Zealand at two mosques in 2019, according to the document. That livestream “started everything you see here,” the document states.
In addition to the New Zealand massacre, the suspect was allegedly inspired by other racist mass shooters, including Dylann Roof, the gunman who killed nine Black people at a Charleston, South Carolina, church in 2015, and the assailant who killed 77 people in Norway in 2011, according to the document.

The document includes dozens of pages of racist and anti-Semitic screeds, including some language that appears to be copied from the New Zealand shooter’s own writings.