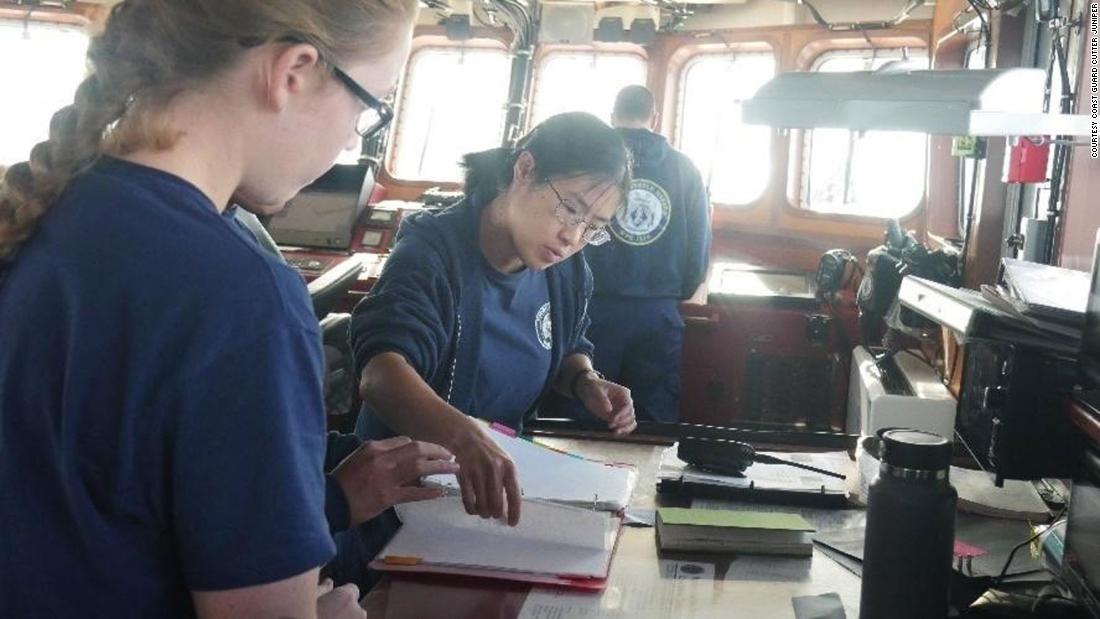 The US cutter “helped to fill the operational presence needed by conducting maritime surveillance to deter illegal, unreported, and unregulated fishing in the northern Solomon Islands,” a Coast Guard press release said.

The Myrtle Hazard was already in the region as part of Operation Blue Pacific, what the Coast Guard calls its “overarching multi-mission … endeavor promoting security, safety, sovereignty, and economic prosperity in Oceania while strengthening relationships.”

The Solomon Islands is just one of several Pacific island nations the US aids under Operation Blue Pacific, including, among others, Kiribati, Samoa, Fiji, Tonga and Papua New Guinea — all stops on the Chinese foreign minister’s tour.

China had proposed a sweeping regional security and economic agreement with a number of Pacific Island nations, according to documents seen by CNN. The deal, which touched on a range of areas including education and health, was targeted for a Monday meeting between Wang and foreign ministers from nine Pacific island nations in Fiji.

The meeting ended without the signing of the proposed agreement, with Wang isntead noting the grouping had landed on five “points of consensus.” Those areas, largely general statements such as deepening strategic partnership and pursuing common development, did not include security.

The pact, if accepted, would have marked a significant advance in Beijing’s connection to the region, which holds geo-strategic importance in the Indo-Pacific.

“Don’t be too anxious and don’t be too nervous, because the common development and prosperity of China and all the other developing countries would only mean great harmony, greater justice and greater progress of the whole world,” he said.

Amid the Chinese push, the US Coast Guard’s efforts in the region haven’t received much attention. But they are substantial, and part of the Biden administration’s Indo-Pacific strategy released in February.

“We will expand US Coast Guard presence and cooperation in Southeast and South Asia and the Pacific Islands, with a focus on advising, training, deployment, and capacity-building,” the strategy’s action plan says.

The Coast Guard’s website shows cutters have spent hundreds of days and steamed thousands of miles in the past two years helping Pacific island nations.

One of the key parts of Washington’s influence in the region is through “shiprider agreements” with 11 Pacific nations, including Cook Islands, Fiji, Kiribati, Marshall Islands, Micronesia, Palau, Nauru, Samoa, Tonga, Tuvalu and Vanuatu, according to US Coast Guard publications. Under these agreements, defense and law enforcement personnel from the partner nations embark aboard the US cutters to enforce their nation’s laws in the island nations’ exclusive economic zones.

The relationships the US Coast Guard has forged in the Pacific islands have deep roots, said Collin Koh, research fellow at the S. Rajaratnam School of International Studies in Singapore.

That “institutionalized network of defense and security relationships” is something Beijing would have a hard time duplicating, Koh said.

“It doesn’t enjoy the extent of partnership networks that its geopolitical rivals, the US included, have cultivated in the region for decades,” Koh said.

With fish as the main food source and key economic driver of the island nations, the Coast Guard says the emphasis of Operation Blue Pacific is to deter illegal and unregulated fishing.

And that has a big link to China.

With the world’s largest fishing fleet, “Chinese-flagged fishing vessels range the world over in search of catch and are notorious for fishing within other nations’ — especially developing nations’ — exclusive economic zones (EEZs),” according to a 2021 report from the Brookings Institution.

Koh said the scope of Chinese fishing activities doesn’t help Beijing’s case for being a positive force in the region.

“Chinese fishing vessels are not necessarily viewed in a benign manner — they are large distant water fishing fleets, equipped with large and better-equipped vessels that can outrun, outmuscle and outfish local fishing boats,” he said.

US Coast Guard the “near-perfect” tool

Carl Schuster, a retired US Navy captain and a former director of operations at the US Pacific Command’s Joint Intelligence Center, said the Coast Guard is “near perfect … for relations building with Pacific Island countries.”

Coast Guard cutters are not threatening vessels, associated with rescuing people as much as anything else, Schuster said.

“You cannot understate the Coast Guard’s importance to … relationships in the Central and Western Pacific,” he said.

While some observers note that China also has a well-equipped coast guard that could do what the US is doing in the region, Koh doesn’t see that happening, at least in the near term.

He notes Beijing’s troubles in waters closer to home, in places like the South and East China seas, where disputes over fishing rights and territorial claims keep the Chinese coast guard busy.

Those also bring in China’s credibility as a fair broker into question, he said, leaving an advantage to the US Coast Guard.

“It’s difficult to imagine China having sufficient political capital to push for something analogous to what the US is currently doing,” Koh said.