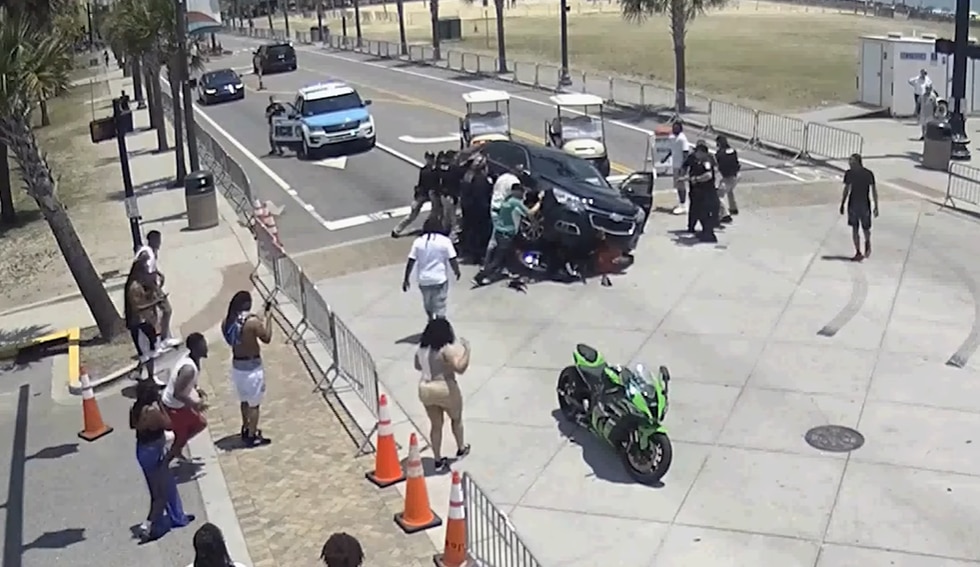 MYRTLE BEACH, S.C. (WMBF) – Witnesses and police officers jumped into action to help save a motorcyclist that was trapped under a vehicle along Ocean Boulevard in Myrtle Beach.

**WARNING: We want to warn you that some people may find the video disturbing**

The video from a traffic camera shows a car hitting the back of a motorcycle on Saturday afternoon at the intersection of 8th Avenue North and Ocean Boulevard and going over the motorcycle.

The passenger on the back of the motorcycle is thrown off the front while the driver of the bike is trapped underneath the car.

People who witnessed the crash, along with police officers, rush to the vehicle and begin to push the car in order to help free the trapped biker.

“I was horrified inside because I didn’t know what we were gonna see,” said Lieutenant Michael Quinn with the Myrtle Beach Police Department.

A camera at the intersection, which is monitored by Myrtle Beach PD, captured the incident.

Witnesses and police officers jumped into action to help save a motorcyclist that was trapped under a vehicle along Ocean Boulevard in Myrtle Beach.

“I was really worried it was going to be a fatality,” Quinn said.

This was a situation where the right people were around at the right time, all coming together to help save the life of someone they don’t even know.

“That was the most gratifying part of it for me,” said Quinn. “We wouldn’t have probably all been able to lift it if it wasn’t for the help. And everyone came, it didn’t matter if you were a cop or someone passing by or a biker down here. Everyone jumped in, knew what to do, and did it all together.”

The Myrtle Beach Police Department said the driver of the vehicle, identified as Johnny Taylor Jr., was arrested and charged with having an open container of alcohol and following too closely.

Thankfully, the rider and passenger of the motorcycle were treated at the hospital and are expected to be OK.

“As the summer season is picking up, please remember to slow down and look twice to keep everyone safe! It only takes a moment to cause a crash,” the Myrtle Beach Police Department posted on its Facebook page.

Police also advise drivers to leave extra space between themselves and other vehicles.